For its first few years, the common response to the mention of Bass Connections was usually, “I’ve heard of it, but I don’t really know what it is.”

The Bass Connections themes are housed in five of Duke’s interdisciplinary institutes and initiatives:

Try squishing that into an easy-to-digest sound bite around campus.

But there’s no murkiness in the magnitude of what this program has achieved since its launch five years ago.

“It’s a complicated program. The core of it is problem-centered, interdisciplinary collaborative inquiry.”
- Ed Balleisen

More than 2,000 undergraduate and graduate students plus faculty and postdocs have taken part in Bass Connections research projects that tackle societal challenges around the world, ranging from autism therapy in local schools to public health in Peru.

For some, the experience of converting classroom lessons into real-world experiences has set students on a career path they didn’t even consider before they were accepted to a Bass Connections team.

“Collectively, Bass Connections has been the centerpiece of my Duke experience -- providing a common thread to weave together my scientific training and my policy interests into an impact-oriented research experience that is now the foundation for my future career,” says Kadakia. (In April he was named a Truman Scholar.)

During his freshman year, sophomore Pranav Ganapathy looked to apply his economics and global health courses outside the classroom. He was accepted to a Bass Connections project that’s conducting research on the health needs of refugees in Durham.

“I have been applying knowledge in ways I didn’t expect,” he says. “I thought I’d never use the French I’d studied in high school, but I just finished a focus group with it; there’s significant francophone refugees in Durham. To engage in the classroom and then work on this real-world problem was really cool for me.”

“The development of solutions for major challenges in the world generally don’t fit into disciplinary boxes,” Balleisen says. “That kind of endeavor requires teams; it requires multiple kinds of disciplinary perspectives and methods; it requires engagement with stakeholders and decision-makers, and a two-way dialogue.

“The program has helped expand an interdisciplinary dimension to many courses at Duke, giving students more opportunities to experience collaborative work -- even outside of Bass Connections project teams,” Balleisen says.

There are also affiliated summer research programs now, such as Data+, run by Duke’s Information Initiative, and Story+, run by the Franklin Humanities Institute.

This year, more than 650 undergraduate and graduate students applied to participate on a Bass Connections project team. Teams typically include faculty leaders, undergraduates from diverse majors and doctoral or professional students. One longstanding Bass Connections team focusing on music therapy to help children with autism in local schools has included students from psychology, music, public policy and education.

Many teams also work with NGOs and other external groups, which adds another layer of real-life research experience.

“It’s an opportunity to bring students from so many different disciplines together to solve a common problem, and that problem requires a lot of different expertise,” says Dr. Geri Dawson, director of the Duke Center for Autism and Brain Development. “All those perspectives were brought to bear in developing this (autism) project.” 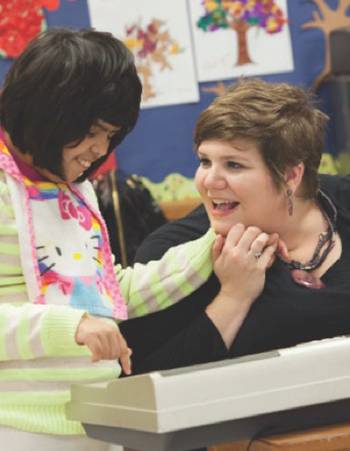 In 2014, a Bass Connections team co-led by Dawson began working with Durham-based Voices Together to develop measurement tools for a music therapy program used in special-education elementary classrooms in North Carolina.

The team has been assessing how well the music therapy improves communication and social-emotional learning among students with autism.

Dawson says the work has added measurable results to the program, which has helped boost it as a reliable method for helping elementary-school children with autism build their communication skills.

“Much of our research often takes place in the lab and under very controlled settings … ultimately you want to use it in the community,” Dawson says. “When you try to translate things into the community it’s really hard -- you have teachers and schedules, all the noise in the background.”

Yasmine White, founder and CEO of Voices Together, says the Bass Connections projects “were critical in helping us gain positive research data, moving us to an evidence-based model and best practice in NC.”

The next step is designing a program that teachers can use in the classroom that will enable schools to serve more children simultaneously, Dawson said.

Dawson also led a second Bass Connections project focused on autism, which led to the development of a free app in partnership with Apple that works as a possible screening tool for autism and other developmental disorders. Last fall, Dawson and colleagues received a $12.5 million, five-year NIH grant to study connections between autism and attention deficit and hyperactivity disorder (ADHD). 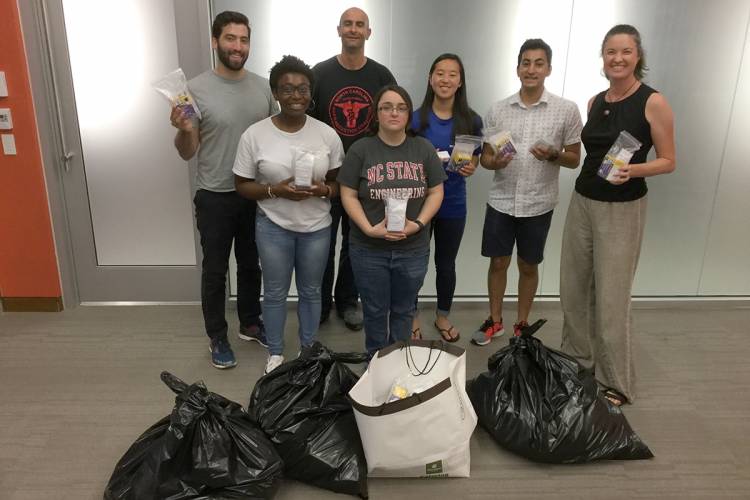 In 2016, a Bass Connections team came together to address the opioid epidemic, starting in Durham.

The team partnered with Durham County’s Crisis Intervention Team (CIT) Collaborative, a group of first-responders who work to divert residents facing mental health and/or substance-use crises from jail and into treatment. And they’ve worked with the Duke Hospital Emergency Department to establish a program in which providers give the opiate-overdose-reversal drug Naloxone free to at-risk patients, followed by an evaluation period.

The team’s research on heroin use across the state, which is set to appear in the May edition of the North Carolina Medical Journal, shows that the number of opioid overdose deaths in the state increased by nearly 800 percent between 1999 and 2016.

Before 2010, more than two-thirds of opioid deaths were the result of prescription opioids. Since 2013, however, that category has dropped to less than 45 percent of opioid overdose deaths, and opioid deaths by illicit drug use have increased dramatically, according to the report.

Team member Katie Kanter became interested in the Bass Connections project after learning that a friend at Duke had struggled with opioid addiction while in high school. In college the friend refused to take pain medications for a broken rib for fear of rekindling her addiction.

In an April blog post, Kanter, a senior majoring in neuroscience, lists 10 of her team’s achievements. These include assembling hundreds of naloxone kits and successfully lobbying the state legislature to legalize syringe exchange programs. 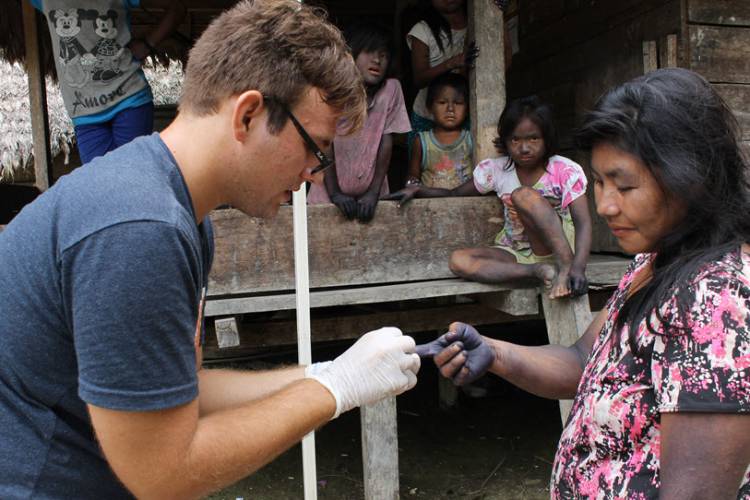 Since the first year of Bass Connections, a team has traveled to the Peruvian Amazon each summer where students apply what they’ve learned about topics such as field epidemiology and bench-to-field science. Their focus has included understanding human health impacts from ongoing environmental change because of gold mining, road construction and heavy metal exposure.

The team’s work has already made a difference.

The Peruvian government used the team’s findings of high levels of mercury in hundreds of samples to determine which communities should receive emergency aid. The journal Nature covered the team’s work in a 2016 article, and NASA awarded a $1 million grant to faculty team leader William Pan, assistant professor of global environmental health, to develop an early warning system for vector-borne diseases in the Amazon.

Luiza Perez, a junior majoring in sociology and global health with a minor in chemistry, has been involved with Bass Connections since her freshman year. In Peru she has studied the efficacy of insecticide-treated bed nets in protecting against malaria and conducted several surveys to better understand risk factors for leishmaniasis among the population. She has also received a grant to conduct independent research that stemmed from her Bass Connections experience.

“I think that the most special thing about the program is that you get to be involved in a project that is multidisciplinary in every sense of the word,” Perez says. “Team members have different education backgrounds, levels and experiences. Nevertheless, everyone's voice is equally valued and heard.” 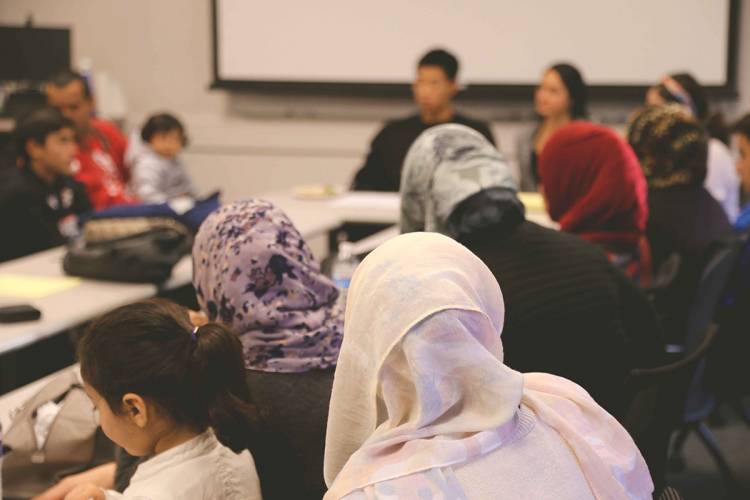 Often buried by the headlines about immigration policy and border walls, resettled refugees need help with life’s basics as they adapt to a new world.

From July 2015 to June 2016, Durham received roughly 14 percent of the 3,000 refugee families resettled to North Carolina.

The team’s work also includes producing a brochure in multiple languages that provides important information about resources for refugee families.

Often, they simply need help with the basics.

“This includes people not knowing they can go to a pharmacy to purchase their own medicine, like Tylenol and Motrin,” says faculty team member Deborah Reisinger, an assistant professor in Romance Studies and affiliate faculty in the Duke Global Health Institute.

Specifically, the group has focused on:

“They are very willing to participate, I think they are very grateful,” sophomore sociology major Maram Elnagheeb says of local refugees. “I think they’ve faced greater challenges before.”

Like other students on Bass Connections teams, Elnagheeb says she appreciates the opportunity to do research that aims to “solve issues.”

“I gained skills I probably would not get in the classroom.”