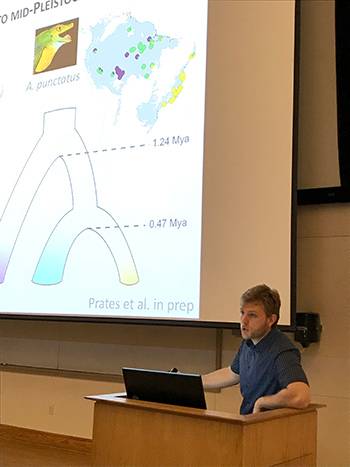 Duke scholars across the university have for many years seen both the Amazon River region and Brazil as a “lab for knowledge.” For two days last week, they sat together and shared their research on a range of interdisciplinary topics from health care law to indigenous law.

The April 5-6 event, “Amazon Frontiers: The Fourth Annual Global Brazil Conference at Duke,” was organized by the Duke Brazil Initiative and the Center for Latin American and Caribbean Studies, with support from the von der Heyden Fellows Program Endowment Fund, the Hanscom Endowment and the Duke Office of Global Affairs.

“Duke has been building a position of leadership in the field of Amazonian studies and Brazilian studies in particular in the last five years,” said John French, professor of the Department of History and co-director of the Duke Brazil Initiative.

“Brazil contains the world’s fifth largest population,” French said. “Beyond the fact that there are problems there, this is also a place that has addressed issues in ways that are really innovative, such as the expansion of higher education, which is a topic that I have been researching for the last five years.”

French will hold an April 20 event at Duke to discuss the Brazilian higher education project.

Whether the panels focused on cultural issues or the environment, each was driven by large, challenging issues concerning a country and a region that affects the rest of the world.

At a discussion on the evolution and diversity of the Amazon, Paul Baker professor of the Department of Earth and Ocean Sciences, said he was still taken by how the river is “a beautiful example of the interrelatedness of culture, policy, government, economics and nature.”

“That interdisciplinary is critical,” Baker added. “We wonder if the Amazon is at a tipping point culturally, or naturally. We ask how can we do anything about it? If we want to work for biodiversity, we need to work with the people.”

On the cultural side, Professor Gustavo Furtado, an expert of cinema and documentary in Latin America, led a discussion on “Indigenous Women, Video Technology, and Transmission of Knowledge in the Amazon.” Afterwards, Furtado said Duke is taking the right approach to studying the country.

“Brazil has a very interesting history, similar to the US, a multicultural and multiracial history with slavery and abolition and all the conflicts of a modern state with that kind of legacy. Duke, having a very interdisciplinary approach, provides a good place to have dialogues related to these issues,” said Furtado, who just finished a forthcoming book about documentary and democracy in Brazil.

Expansion of 'Approved to Hire' States