Felipe De Brigard is an assistant professor of philosophy at Duke, where he runs the Imagination and Modal Cognition Lab. That may not sound like philosophy in the traditional sense; De Brigard’s work is at the intersection of philosophy and neuroscience, and is supported right now by a $500,000 grant from the Office of Naval Research. 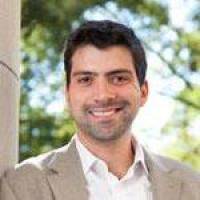 Professor De Brigard: You explore how the imagination and memory interact. How did you become interested in this?

I’ve been interested in memory for as long as I can remember. In college, I studied neuropsychology in addition to philosophy, and interacted with patients suffering from memory deficits. One such deficit, known as confabulation, involved patients coming up with fantastic stories about absurd scenarios as if they were autobiographical memories. What intrigued me about this phenomenon is not what these patients got wrong -- which was a lot -- but rather what they got right. Despite being false, there was an air of plausibility to their confabulations.

What are you working on now?

My main interest is memory, and in particular the fact that we have false memories. We think we’re so sure that we remember something that happened – but it didn’t.

In trying to understand how we generate these false memories, I was struck by this model in which memory reconstructs a scene. You have pieces and gaps, and those gaps are filled with something like the most likely way in which they could be filled.

You mean, what you want to be true?

Not necessarily. You almost never have control over the process of filling up or reconstructing your memories. Unbeknownst to you, the process operates probabilistically. Given your past experiences and knowledge, your memory system gives you the most likely thing that could have happened to help you fill any gaps at the time of retrieval. Most of the time the final product coincides with what actually happened, so it is true. But sometimes it does not, in which case we talk about false memories. I think most of our memories are reconstructed in this way, and many of them are false, we just don’t notice.

All of this made me think that when we imagine things, we also imagine how things could have occurred in the past. Say you were crossing the street and almost got hit by a car. You can’t help but imagine what would have happened if you did get hit by the car. We just slip into that kind of imagination.

Those two things are closely linked – the counter-factual ‘what-if’ imagination, and the way memory recollects things. My lab works a lot on that connection, between memory retrieval and imagining hypothetical scenarios.

Those sorts of causal judgments are really weird because the absence of an event is what causes something to happen. Something didn’t happen, and as a result, there was an effect. That’s called an omissive causation, because something was omitted. Trying to understand that is difficult.

My graduate student Paul Henne and I are interested in understanding how people make judgments about omissions. The nonexistence of an event led to the plants dying. I blame you; why don’t I blame something else? The President of the United States didn’t water my plants, but I’m not blaming him. So why do I choose you?

Okay, but in this case, I agreed to water your plants.

That’s right. We had an agreement. We both know that you were supposed to water the plants.

But in a lot of cases, there isn’t a clear agreement. The grant I’m working on explores how people decide what the cause is where the options are less clear. Our suggestion is that this process is dependent on how people generate counter-factual thoughts, and we want to understand how that psychological process works. Ultimately, we want to understand the psychological mechanisms underlying these kinds of cognitive processes to generate models that can contribute to computer programs and artificial intelligence.

What is artificial intelligence?

There is a very uncontroversial way of defining it: AI is a discipline of computer science that seeks to generate computer programs and algorithms to solve complex problems for which we thought human intelligence was required. Period. Some people, I think without much reason, think of AI as a discipline that seeks to manufacture minds and conscious entities. This may or may not happen, but such an outcome is neither its objective nor the best way to define it, in my opinion. It is like saying that medical science is the discipline that seeks to make us immortal. This may or may not happen, but in reality what medical science aims is to prevent us from dying of diseases, accidents, etc.

How do you do this?

In our lab, we do a lot of behavioral and neuroimaging experiments using magnetic resonance imaging. We scan people’s brains while they’re doing a task – like thinking about events that could have occurred.

You create scenarios for people to think about?

Yes, sometimes. In one, I ask people to imagine better and worse outcomes of events. We measure the brain activity to see if we can find patterns and see what parts of the brain are more active or more important for certain tasks.

It sounds like work than can help you fundamentally understand a bit better just how we think.

Yes, that’s true. We specifically are working on how people imagine, and how memory both constrains and guides our imagination.