It wasn’t until Sarah Burdick sat down to watch a Duke men’s basketball game on a snowy Saturday last winter that she saw the moment that spurred the creation of her department’s Instagram account.

Snow and ice from a winter storm blanketed Duke’s campus and, in order for the game to go on, Facilities Management Department staff members had to clear roads and sidewalks. Television cameras captured the crews at work and showed that footage during the game intro.

Burdick, the department’s communications specialist, grabbed her phone and snapped a picture of her TV screen. Within minutes, she set up an Instagram account for Duke Facilities Management and published its first post.

“It’s a great way to reach the Duke community about what we do,” said Burdick, who runs the account.

From Duke’s main online channels to the men’s basketball program’s Twitter account with 2.2 million followers, Duke uses innovative methods to get its story out. Dig deeper and you’ll find that there are other departments embracing new ways – both simple and sophisticated – to showcase their corner of Duke. 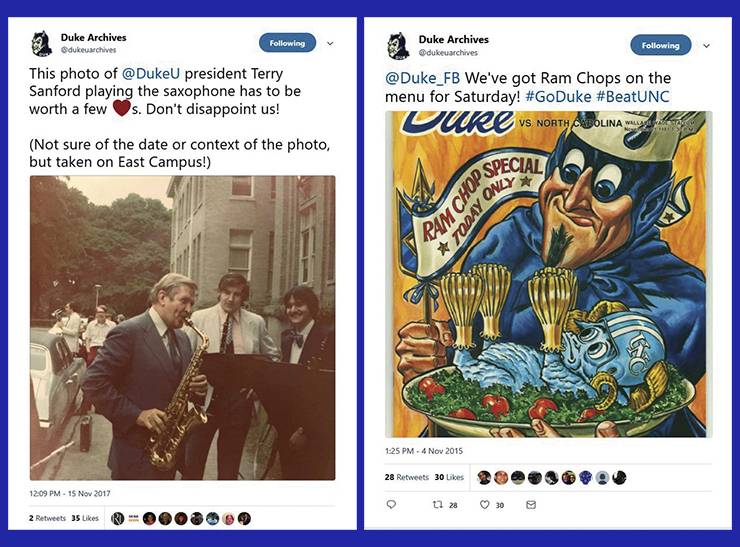 A large part of Amy McDonald’s job as assistant university archivist consists of digging through the documents and artifacts in the Duke University Archives to fish out materials requested by researchers. Along the way, she comes across quirky, illuminating or fun pieces of Duke’s history.

She’ll stumble onto decades-old party fliers, grainy photos of Duke’s early days and writings that show more intimate sides of some of the university’s most important figures.

Previously, these discoveries might make for interesting chatter with co-workers or a post on the archives’ blog. But since the summer of 2014, the historic photos and documents that comprise McDonald’s everyday discoveries have a home on the Duke Archives Twitter account.

“There’s just so much that we find as we’re doing our work, we really wanted to share it with the community,” McDonald said.

The account is a must-follow for people who are curious about Duke’s history. One of the account’s most popular posts came from something that never became part of Duke.

While looking through a box of former Duke President Terry Sanford’s papers last June, McDonald came across a file labeled “Mar-A-Lago.” It contained correspondences showing that, in the 1980s, Duke briefly considered buying the Florida estate, now owned by President Donald J. Trump, and using it as a conference center.

McDonald snapped a picture and sent a tweet that got picked up by a handful
of prominent political journalists, giving the account
a dose of buzz.

“This wasn’t what I was looking for at all, but it was fun,” McDonald said. 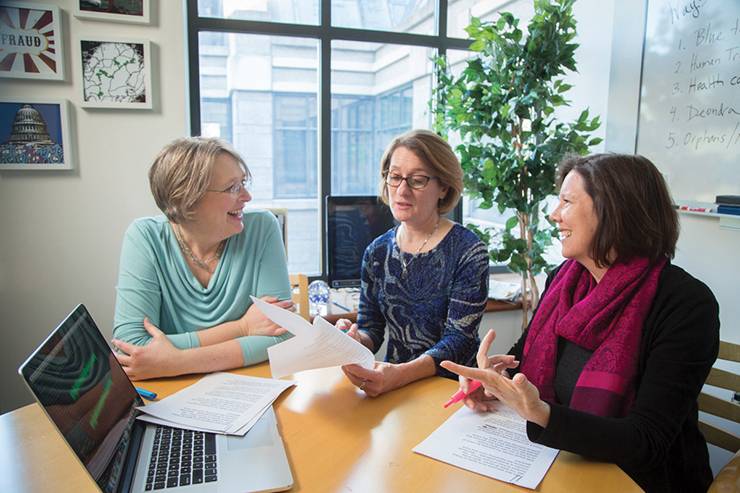 With earphones on and a computer screen filled with dancing audio level readings, Carol Jackson is in her element. Jackson, a digital communications strategist with the Sanford School of Public Policy, is part of the team behind Sanford’s Ways & Means podcast.

With around 40,000 downloads, people have noticed.

“A graduate student, before she enrolled, reached out to me and said ‘Hey, I’ve really enjoyed listening to this, can I work on the project when I get there?’” Jackson said. “That’s pretty cool.”

The challenge of turning potentially dense or specialized research into something that resonates with the public is what communications staffs throughout higher education constantly grapple with. In 2015, Karen Kemp, Sanford’s assistant dean of communications, explored the creation of a podcast that would bring a human element to the work at Sanford.

After getting help from Sanford’s Innovation & Impact Fund, Kemp’s idea was bolstered when Jackson, a public radio producer, joined the staff. Soon after, the first episode, focusing
on fact checkers, was released.

Since then, Ways & Means has showcased the faculty’s work on such topics as end of life healthcare decisions, human trafficking, redistricting and more. It’s also helped spur the development of other Sanford podcasts, such as the interview-style Policy 360 and the student-led Devils’ Discourse.

“There’s 24/7, 365 news coming from many, many, sources now,” Kemp said. “To get people’s attention, storytelling is important. It has changed the way I think about our work.”

Caring for the campus 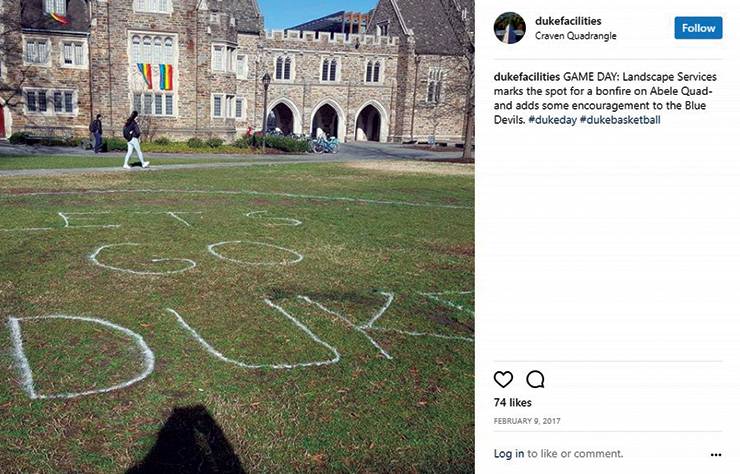 In the year since Burdick started the Instagram account for Facilities, she’s continued filling the feed with photos and stories showcasing the wide range of work of her colleagues. With a few hundred followers, the account has succeeded in showing off potentially overlooked sides of a department whose staff cares for Duke’s campus.

She admits that when she started the account, she didn’t know much about Instagram other than that it was popular with her college-age children. But now, she’s constantly on the hunt for photos and stories that make for fun posts.

She’s gotten photos on a range of activities for the Instagram feed - from employees welding in Cameron Indoor Stadium to the circle a Landscape Services employee drew on Craven Quad before a basketball showdown with the University of North Carolina at Chapel Hill marking where a celebratory bonfire
was allowed to go.

Co-workers even get into the act, occasionally sending photos her way.