As the exciting new field of metamaterials advances, Duke has become one of the world’s leading centers of this research. Founded in 2009, Duke’s Center for Metamaterials and Integrated Plasmonics (CMIP) has grown to encompass dozens of researchers dedicated to exploring artificially structured materials.

What these various metamaterials technologies have in common is the control of waves, from waves of water around a ship’s hull, to the electromagnetic frequencies that power our communications, to sound waves that are measured in meters. Given this scope, the potential impacts of this work are still beyond measure.

“There are a lot of ways to control waves, many of which weren't thought of before or really exploited,” said David R. Smith who co-founded CMIP and helped recruit like-minded colleagues to Duke. “Metamaterials has given us a way to manage waves in a way that is really unprecedented.”

Trying to Fill ‘The Terahertz Gap’

Electrical and computer engineering Professor Willie Padilla, who came to Duke in 2014 from Boston College, is focusing his work at the tiniest scale of wavelengths. His metamaterials research is the most similar to that of David R. Smith, with whom he worked on the original split-ring resonators at UC San Diego 15 years ago. But Padilla is mostly focused on terahertz frequencies that lie between microwaves and infrared on the electromagnetic spectrum.

The terahertz regime has long been ignored by science because it doesn’t lend itself well to manipulation. The radio and microwave devices we have all around us act on electrons. Optical and infrared devices work on photons. But as these devices try to manipulate photons or electrons in frequencies further from their comfort zones on the electromagnetic spectrum, they hit a wall and stop behaving as asked. Lying between the preferred frequency slices of both of these particles is the terahertz range. 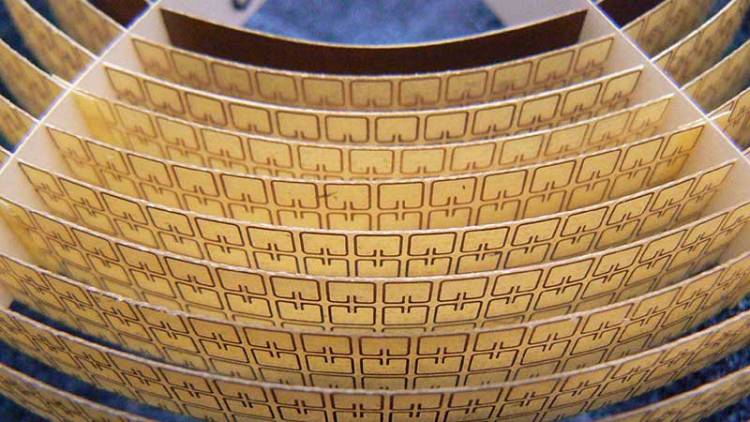 “There’s a fundamental gap, or at least technology shortage, in the terahertz range because our existing technology is based on these two fundamental particles (the electron and the photon),” Padilla says. “You can’t really fill that terahertz gap per se, but you can find ways around it.”

Padilla says that if they can be mastered, terahertz waves have qualities that could be useful. They can penetrate dry clothing, making them a good choice for screening at airports. They might also provide a much greater bandwidth for communications, though their inability to penetrate moisture in the air will likely confine them to inter-satellite applications in space, not point-to-point applications on a cloudy Earth.

Padilla also is working on metal-free metamaterials that are designed to absorb electromagnetic waves rather than to focus or emit them. Such materials could be good for energy harvesting or detectors that could actively scan for methane or natural gas leaks, monitor the health of vast fields of crops or quickly sort plastics for recycling. 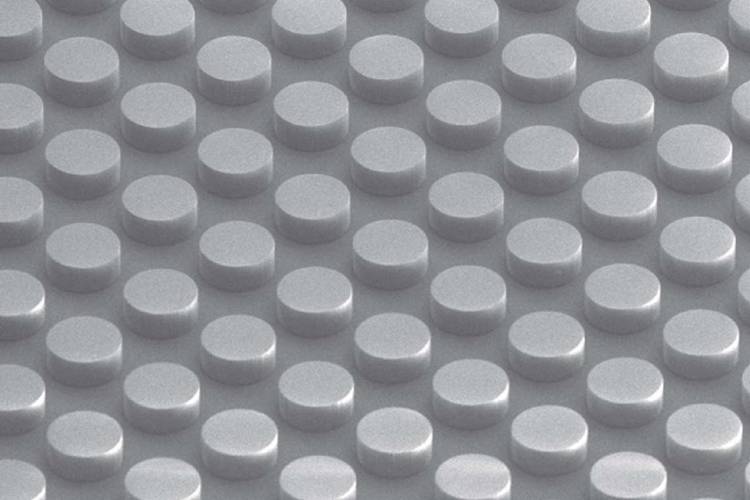 “Thermal infrared cameras are restricted to the infrared range,” said Padilla. “With these metamaterial absorbers, we can build thermal cameras in other ranges of the spectrum where it would otherwise be impossible.”

The “P” in the CMIP acronym stands for plasmonics, which is the specialty of Maiken Mikkelsen, who joined Duke in 2012. Plasmonics uses nanoscale physical phenomena to trap certain frequencies of light, provoking a variety of interesting behaviors.

This is accomplished by fashioning silver cubes just a hundred nanometers wide and placing them only a few nanometers above a thin gold foil. When incoming light strikes the surface of a nanocube, it excites the silver's electrons, trapping the light's energy -- but only at a certain frequency.

The size of the silver nanocubes and their distance from the base layer of gold determines that frequency, while controlling the spacing between the nanoparticles allows tuning the strength of the absorption. By precisely tailoring these spacings, researchers can make the system absorb or emit any frequency of light they want, all the way from visible wavelengths out to the infrared.

The ability to absorb or emit any frequency of light in these realms by tailoring structural properties leads to some interesting ideas for applications. For example, Mikkelsen is working on developing the technology into a new way of detecting images through multiple spectrums. Such imaging devices can identify thousands of plants and minerals, diagnose cancerous melanomas and predict weather patterns, simply by the spectrum of light they reflect.

This application has a leg up on current imaging technologies that can switch between spectrums, as they are expensive and bulky because they require numerous filters or complex assemblies. And the need for mechanical movement in such devices reduces their expected lifetime and can be a liability in harsh conditions, such as those experienced by satellites.

“It's challenging to create sensors that can detect both the visible spectrum and the infrared,” said Mikkelsen. “Traditionally you need different materials that absorb different wavelengths, and that gets bulky and expensive. But with our technology, the detectors' responses are based on structural properties that we design rather than a material's natural properties. What's really exciting is that we can pair this with a photodetector scheme to combine imaging in both the visible spectrum and the infrared on a single chip.”

The technique can be used for printing as well. Instead of creating pixels with areas tuned to respond to specific colors, Mikkelsen and her team creates pixels with three bars consisting of silver nanocubes that absorb three colors: blue, green and red. By controlling the relative lengths of each bar, they can dictate what combination of colors the pixel reflects. It's a novel take on the classic RGB scheme first used in photography in 1861.

But unlike most other applications, the plasmonic color scheme promises to never fade over time and can be reliably reproduced with tight accuracy time and again. It also allows its adopters to create color schemes in the infrared.

At the other extreme of wavelengths, well outside the electromagnetic scale, CMIP group member Steve Cummer has been devising ways to control sound with metamaterials.

“I was part of the Duke team working on cloaking with John Pendry and David Smith, and one natural question that came out of that work was, can you do the same kinds of tricks to control other kinds of waves?” said Cummer, who is a professor of electrical and computer engineering and continues to work with electromagnetic metamaterials as well.

“Sound waves were a natural second choice to look at,” Cummer says. “After six months of dead-ends, I finally found an approach that worked and showed that you can in fact control sound waves in the same ways, if you can create the right material properties.”

The right material properties turned out to be the density and compressional stiffness of the fluid the sound is moving through. Cummer discovered that -- as with electromagnetic metamaterials -- if he created specific structures with otherwise unremarkable materials, he could control how sound waves moved.

The colorful plastic structures his team makes with 3-D printing look a lot like Lego blocks that can be stacked and arranged in various configurations to obtain different results. The interiors of the plastic blocks contain spirals and other shapes that force sound waves to take paths of varying lengths. The different lengths of travel in each block’s internal structure slow parts of a sound wave down to varying degrees, changing the shape of the wave that emerges on the other side of an array of blocks.

In a 2016 proof-of-concept study, Cummer and his team built a wall of such blocks carefully tailored to sculpt a soundwave into an arbitrarily shaped hologram, a shaped sound. They chose to make the shape of the capital letter A.

“Most people are familiar with holograms made of light,” said Cummer. “That’s a general trick that one can do with all kinds of waves. The key is how to use a flat surface to create a complicated, three-dimensional wave field. We created an acoustic metamaterial structure where the sound emerging on the other side is a much more complicated sound field. While we made the sound wave take the shape of the letter A, we might be able to do something like mimicking the complicated sound field produced by a live orchestra out of a single speaker.”

Other areas of application include soundproofing or sound absorption, where more compact structures could absorb only the unwanted tones, leaving the rest unaltered. And if the idea could be scaled down to ultrasonic dimensions, the technique could allow smaller, cheaper, more energy-efficient ultrasound imaging devices.’

Ripples of experimentation, traveling in every direction

Elsewhere in the Center for Metamaterials and Integrated Plasmonics, teams are working on wireless power transmission, microwave imaging for security screening, wake-removal in ocean-going vessels and more. Their explorations range from theoretical calculations to prototypes with commercial potential.

And the group continues to grow. In the summer of 2018, Natalia Litchinitser will join the group from the University at Buffalo. Working in the realm of nonlinear optical photonics, Litchinitser is pursuing such projects as dynamically switching the structure of a beam of light from a simple circular beam resembling water flowing through a tube to a vortex that looks more like water going down a drain. The ability to change the light’s structure in this way could be used to encode information through multiplexing, a process that allows multiple streams of data to share the same cable or airwaves. She also works in the realm of topological photonics, which seeks to direct light around tight corners using tiny waveguides that don’t lose any photons to scattering.

“It's something that started out as a very scientific pursuit, very fundamental research, almost philosophical,” Smith said. But now there are metamaterial companies emerging.  “The journey has been spectacular, “ Smith said. “Starting from ‘what is this good for?’ -- who knows, who cares -- into really outlandish, crazy ideas, and now into refined actual commercialization of ideas.