DURHAM, N.C. -- To a mantis shrimp, walking away from a fight doesn’t mean being a wimp. It means recognizing who they’re up against and knowing when to bail rather than drag out a doomed battle, Duke University researchers say.

Mantis shrimp use sparring matches to decide when to fight and when to fold, finds a study published Jan. 17 in the journal Proceedings of the Royal Society B.

The study is part of a larger area of research that uses game theory to understand how animals resolve fights without killing each other.

Heavy-hitting relatives of crabs and lobsters, mantis shrimp have spring-powered appendages that could easily deliver a fatal blow. One strike is enough to crack open a snail or dismember a crab. But mantis shrimp rarely fight to the death. Instead, one opponent usually backs down before things spiral out of control. 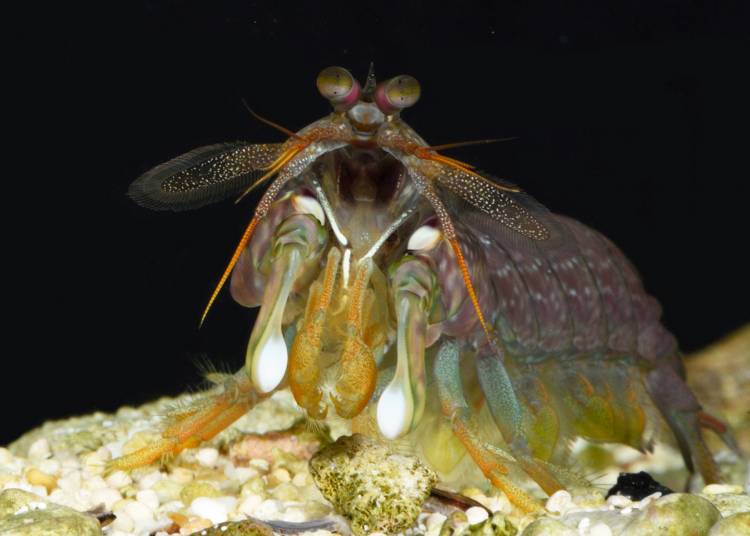 Researchers since the 1960s have proposed a number of theoretical models to describe the mental calculus animals use to decide when to give up a fight. But many previous attempts to tease them apart have been inconclusive, said co-author Patrick Green, a doctoral candidate in biology at Duke.

According to some models, animals settle fights by looking inward. They realize when they’ve reached their limits, and draw a line before they’re in too deep. In “self-assessment” models, as they are called, “you’re not thinking about your competitor,” Green said.

On the other hand, “mutual assessment” models assume that animals compare themselves to their competition as they go, and use that information to plan their next move. If one party thinks they have a good chance of winning they keep up the attack, and if they suspect they’re outmatched they choose to lose and bow out.

These shrimp-sized creatures live in the southern Caribbean on the shallow bottoms of seagrass beds. There, they battle to keep intruders away from burrows in the reef rubble where they feed, molt and mate.

The researchers pitted same-sex pairs of mantis shrimp against each other in clashes over artificial burrows made of plastic tubing.

First they let one mantis shrimp make a home in a burrow, then they introduced an intruder and analyzed the two rivals’ behavior as they dueled it out for rightful ownership of the refuge.

The first animal to give up and back away was deemed the loser. Whoever managed to capture or hold onto the burrow was the winner.

In more than 60 confrontations, victory typically went to the heavier shrimp, or the one with the home turf advantage. Heavyweight winners ousted their opponents more quickly, and in fewer strikes.

The researchers also found that fights followed a predictable course. During the initial phases of combat, mantis shrimp might approach and flick their antennae to pick up their opponent’s scent, or raise and spread their folded forelimbs. If that doesn’t make one of them think twice, the fight heats up and they take turns striking each other on the tail with their hammer-like appendages.

Once they escalate to sparring they rarely de-escalate to less intense phases, the researchers found.

Overall, the results suggest that mantis shrimp don’t just use their smashing appendages to beat each other into submission. Instead, they seem to trade blows as a way of sizing each other up and deciding whether to fight or flee, akin to mutual assessment models.

“Our results reveal that animals with deadly weapons can use them to assess relative ability and resolve conflict safely,” the researchers said.

This research was supported by the National Science Foundation (NSF IOS 1149748), the Smithsonian Tropical Research Institute, Duke University and the University of Massachusetts, Amherst.