What makes a community vulnerable to climate change-intensified natural disasters is not any dearth of technology but a lack of good governance, according to a panel of experts speaking at a roundtable discussion at Duke in DC.

Borsuk’s work at Duke devises a risk analysis of climate change and applies financial risk-reward models to climate-affected investments, such as insurance markets and urban development. Chan participated in the US delegation to the Paris Climate Accord negotiations while at the State Department. Now at the World Resources Institute (WRI), Chan focuses on the funding and implementation of international agreements.

“Some of our work at WRI,” said Chan “is looking at where money is coming from and is it actually being channeled to the poorest and most vulnerable, addressing community priorities or is it lining pockets?” 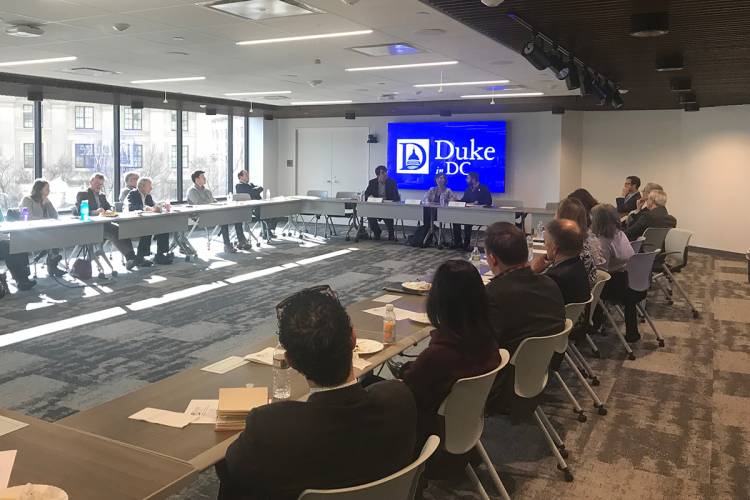 Chan underscored the importance of good governance in any sustainable climate change policy. Many of the underlying causes that make communities vulnerable to natural disasters are human-made inequalities and a failure of responsive government. Although much of Chan’s work is international and pertains to developing nations, her assessment drew parallels with Borsuk’s work on risk analysis models in the United States.

After every natural disaster, there is typically a call from the public for Congress and local governments to provide relief aid. Borsuk said that instead of having an immediate political response where the scope of the damage hasn’t been properly appreciated, the government should assemble a financial recovery plan based on advance planning to quickly put into action.

“There needs to be an advance plan for how these things get covered. There’s an urgency to get money out the door and into people’s hands, and that doesn’t always lead to the most cost-effective or resilience effective kinds of planning,” Borsuk said.

The government could assemble a formula where the scope of natural disaster damages meets a certain threshold, suggested Borsuk, and the government pays for that percentage of the damages while local government makes up the rest. This method would allow the federal government to quickly quantify the immediate costs of a disaster and provide relief.

“If these disasters are happening all the time,” Borsuk said, “then they can’t be handled on a case-by-case basis.”

Check This Out! Mysterious Lemur Calls