Despite finding out via Twitter that President Trump had sacked him as his first chief of staff after only six months, Reince Priebus says he still loves the president and would do anything to help him.

For more than an hour Priebus took questions from political scientist Peter Feaver (and a few from the audience) during the second talk in the Ambassador Dave and Kay Phillips Family International Lecture Series.

The discussion touched on Trump’s unorthodox style of campaigning and governing, the FBI probe into the campaign’s Russia connections, why Hillary Clinton lost the election and the challenges of running such a chaotic White House in the first months of Trump’s presidency.

“There’s nothing like working for President Trump,” Priebus said. “This is not a run-of-the mill, vanilla operation. People would say, ‘Reince, I would have just taken the Twitter away.’ Oh, right, I didn’t think about that,” he said, sarcastically.

Priebus said he, former adviser Steve Bannon and others asked the president to stop tweeting or lectured him on how he should tweet during the campaign.

“But he can say, ‘Most of you in a million years never thought I’d be sitting here, and I am. I’ve got 100 million people that are following me and I won by a razor’s edge. Without these tweets … and constant public debates, I don’t think I’d be president.’ And it’s a hard thing to argue with.” 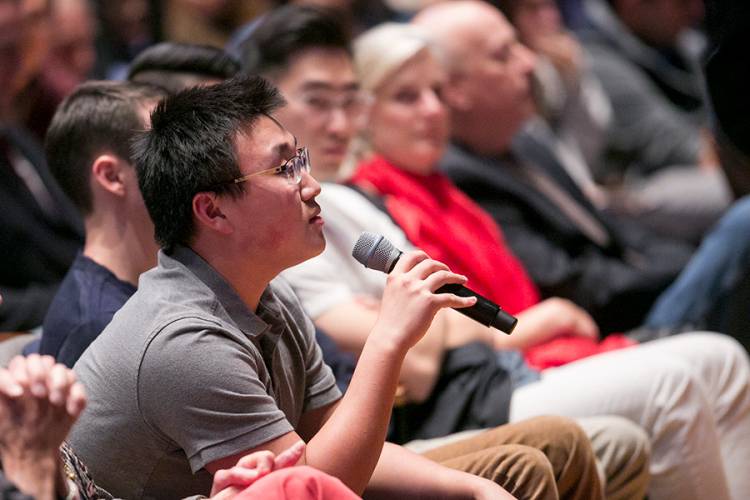 Feaver pressed him on what Trump has achieved so far.

“For the next 40 years the judiciary is going to be different,” said Priebus, who before becoming Trump’s chief of staff was chairman of the Republican National Committee from 2011-2017.

Deregulation is another of Trump’s achievements, which has contributed to a stronger economy, he said.

Regarding probes into Russia’s meddling in the 2016 election, Priebus said he’s convinced Russia did try to influence the election, just as it, China, North Korea and other countries have done for years.

“I don’t know any more than all of you know about [the investigation],” he said. “What you find out is victory has a lot of fathers and losing has a lot of orphans.”

Regarding Trump’s reported backtracking in acknowledging it was his voice talking about groping women on the infamous “Access Hollywood” recording from 2005, Priebus said: “First of all, it is his voice. There’s no doubt about that.”

During the Q&A, an audience member asked Priebus if he had asked Trump to get out of the race when the firestorm raged over the tape.

Priebus responded with a story about when they first learned about the recording. When Trump asked him what he’s hearing about the tape reaction, Priebus said that Trump will lose big or should drop out.

“He was ashamed,” Priebus said. When Trump read the transcript, he was immediately humbled and embarrassed. “He was a real person who was not pleased with what he read on paper.”

Clinton lost the election in part because Trump can play the media like no one else.

“As a candidate he sucked up every bit of media attention that was available to both candidates,” Priebus said, adding that Trump connected with disaffected voters.

“He blew things up. I think that people got to the point in this country where they were looking for the biggest middle finger they could find … and there was no better person to grab that big middle finger than Donald Trump.”

Then-FBI Director James Comey’s reopening of a case against Clinton and her colleagues just before the election over the use of a private email server while she was secretary of state gave “new life” to Trump’s campaign, Priebus said.

Another reason Clinton lost, Priebus said, was because Democrats design their campaigns around the candidate, and Obama’s 2012 campaign set the standard. That strategy didn’t work with Clinton, he said.

Conversely, the Republican Party designs its campaigns around a party model, which makes it easier for a candidate to “slide in” and carry the mantle.

Priebus also responded to an audience question about the campaign of embattled Alabama Senate candidate Roy Moore, who’s facing allegations he pursued sexual relationships with teenage girls while in his 30s. Priebus said Democrats do not have enough of a presence there to defeat Moore, and that the controversy will likely die down after the election.

Monday’s talk was sponsored by the American Grand Strategy Program, POLIS, the Department of Political Science and the Sanford School of Public Policy.