As he does every Sunday afternoon, Christopher Jacobson played double duty conducting the choir and playing the organ during Duke University Chapel’s service of Evensong.

He began a recent service with the choir as its members walked from the narthex, singing “Jerusalem, My Happy Home.” As the choir approached the altar, Jacobson, Duke University Chapel organist, stepped aside to take a seat in the chancel at the Kathleen Upton Byrns McClendon Organ, which is the Chapel’s original organ, built by the Aeolian Organ Company and installed in 1932 with 6,600 pipes.

“Duke Chapel is one of the most unique and special places for the study of organ and sacred music because of the building and rich diversity of the instruments here,” he said.

See the full schedule for the Organ Recital Series and other music at Duke University Chapel.

Jacobson is one of two full-time organists at Duke who play the three organs. The other is Robert Parkins, who is the university organist and professor of the practice of music. The two musicians split their duties to cover all the organ playing at the Chapel for Sunday and weekday worship services, university events, weddings, funerals, concerts and recitals throughout the year.

More informal organ music is also played regularly in the Chapel, and visitors are invited to listen from 12:30 to 1:30 p.m. Monday through Thursday during the academic year, excluding breaks and holidays.

At the musicians’ disposal are three organs that play different styles of music from the 16th century to present day.

“There aren’t many universities with a comparable collection of organs in one room,” Parkins said. 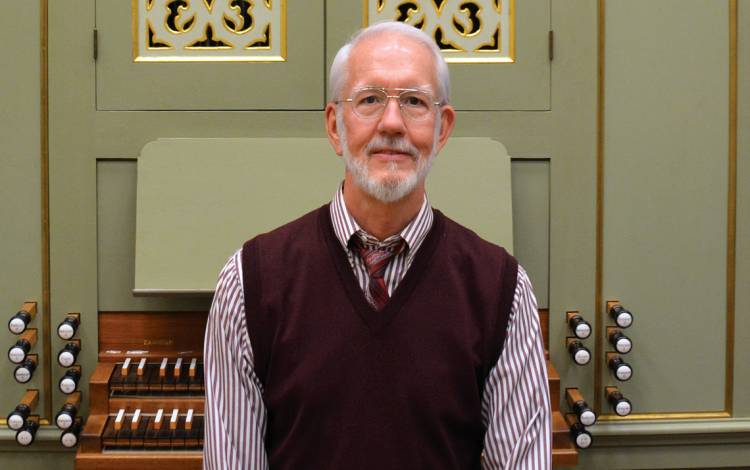 In Parkins’ office is a towering green organ.

The mechanical-action pipe organ, which dates back to the 1970s, is used by Parkins to teach students.

“I fell into the lap of luxury,” Parkins said. “A lot of colleagues are not lucky enough to have an instrument like this in his or her studio.”

Parkins, who has worked at Duke since 1975, grew up playing the piano and began gravitating toward the organ in high school. He attended the University of Cincinnati College-Conservatory of Music and graduate school at Yale University before landing a job at Duke.

When he’s performing in the Chapel for Sunday morning services, Parkins generally plays from the Benjamin N. Duke Memorial Organ, which has 5,033 pipes and was first played in the Chapel in 1976. The organ’s pipes sit in the arch of the Chapel between the narthex and nave.

The third organ, the Brombaugh, sits in the Memorial Chapel.

“It has a special tuning system that keeps it authentic to similar organs used in 17th century Italy,” he said.

Parkins has stuck with playing organs so long because he loves the challenge of playing the instrument. When he’s not rehearsing and instructing, Parkins favorite music to play is the works of Johann Sebastian Bach and early Spanish keyboard music, which has been a subspecialty of his since graduate school.

“I can’t think of any other instrument, other than the carillon, that requires you to use your feet to play notes and pitches,” Parkins said. “It’s the best of all worlds.” 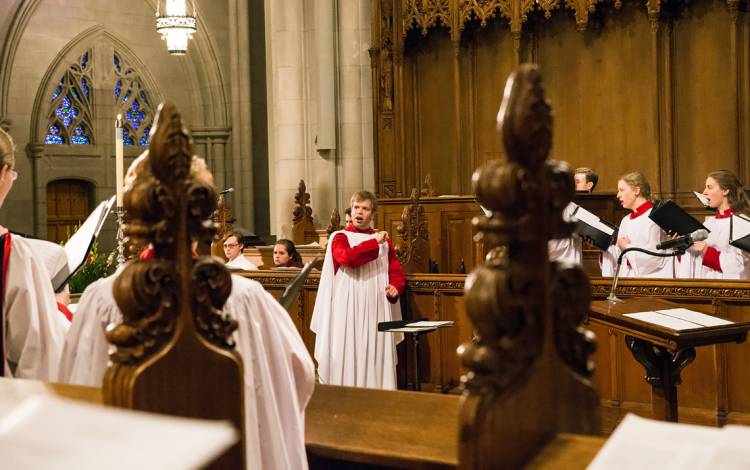 Jacobson also grew up playing the piano before learning to play the organ late in middle school.

“When I was a seventh grader getting into the organ, I thought, ‘the piano has one keyboard but the organ has three or four. It must be three or four times as cool,’” Jacobson said. “It looked fascinating.”

Jacobson attended Eastman School of Music and St. Olaf College before landing as an assistant organist at Washington National Cathedral. There, he performed during Gerald Ford’s funeral in 2007 and Barack Obama’s inauguration in 2009.

“The most terrifying bit was getting stopped by Secret Service to check my music and scores,” Jacobson said. “I didn’t expect that.”

At Duke Chapel, Jacobson has played all of Bach’s organ works, 257 pieces of music, in a year-long series of fourteen recitals.  He also conducts the Duke Evensong Singers at 4 p.m. every Sunday afternoon at the Chapel.

“No two organs at Duke or anywhere are alike. Each one is different and produces different sounds," Jacobson said. "You can really play the music of Johann Sebastian Bach on the Flentrop organ in a way we know from research and scholarship that’s historically close to the way he conceived it 300 years ago."

Jacobson will perform as part of Duke Chapel's annual Organ Recital Series at 5 p.m. Dec. 17 in the Chapel.

“It’s very easy to walk into this building, see beautiful things, hear beautiful sounds and let that experience wash over you,” he said.