DURHAM, N.C. -- Invasive cells deploy a trick to break through tissues and spread to other parts of the body, researchers report.

In a new study, 3-D time-lapse imaging of cellular “break-ins” in the transparent worm C. elegans reveals a fleeting, yet key structure in action. A single protrusion bulges out from the cell surface, wedges a hole through the protective layer that separates the cell from other tissues, and swells until the breach is wide enough for the entire cell to squeeze through.

These findings could point to new ways to prevent metastasis, the spread of cancer cells which typically makes the disease more deadly and difficult to treat. The work appeared Nov. 20 in the journal Developmental Cell.

Most cells in the body stay put. But from time to time, cells trespass into other tissues, said lead author David Sherwood, a biology professor at Duke University.

The ability of cells to break and enter is critical for many normal processes, such as when the placenta attaches to the uterus during early pregnancy, or when immune cells push their way through blood vessel walls to get to sites of injury or infection.

Cell invasion is hijacked during metastasis, when cancer cells leave their original tumor sites and spread to other parts of the body.

To spread, a cell must first penetrate a sheet-like mesh of proteins and other molecules called the basement membrane, which supports and surrounds tissues like a Kevlar wrapper.

One of the first steps in this breakthrough process was recognized 30 years ago, Sherwood said. The basement membrane is too dense to slip through, so invading cells begin by pushing out tiny “feet” many times finer than a human hair, called invadopodia. These piston-like projections pop out of the cell surface every few seconds and then retract, until one punches a tiny hole in the basement membrane. What happens after the initial breach, however, was less clear. 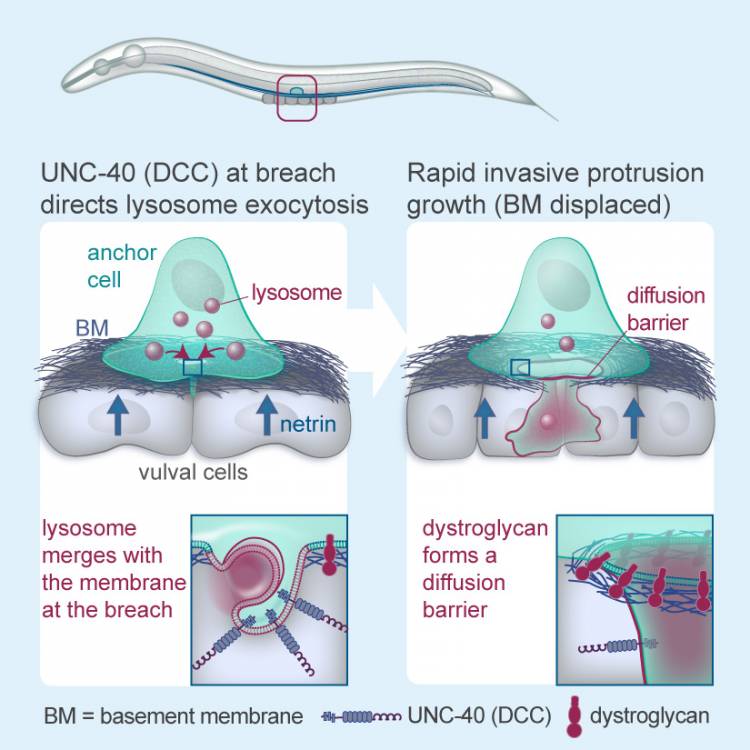 In the new study, researchers identify a second structure that takes over after invadopodia make the first puncture.

Sherwood’s group used a camera attached to a powerful microscope to take pictures of invading worm cells every five minutes for up to three hours.

They tracked a specialized cell called the anchor cell, which breaks through the basement membrane that separates the worm’s uterus from its vulva to connect them so the worm can lay eggs.

Sherwood and colleagues discovered that the C. elegans anchor cell accomplishes this task with the help of a single large protrusion that wedges into the tiny hole created by the invadopodia, like a foot in the door. As the protrusion enlarges, it shoves the basement membrane aside and expands the existing hole.

Rather than stretching like a balloon, the researchers found, the protrusion inflates by adding to the cell membrane from within. Tiny sacs inside the cell called lysosomes concentrate at the breach site. Once there, they fuse with the cell’s outer membrane, increasing its surface area. As the protrusion swells, a protein called dystroglycan clusters at its base to keep the bulge from deflating.

The pushing forces “clear a path for invasion similar to the way a balloon catheter inflates to open an artery,” Sherwood said. Within a half hour it contracts, leaving behind a hole wide enough for the cell to move through.

To make the protrusion, the study shows, the cell relies on a chemical cue called netrin and its receptor to direct lysosomes to the site. High netrin levels have been linked to metastasis in numerous human cancers, which suggests the mechanism the researchers found is a common feature of invasive cells, Sherwood said.

The findings might also explain why drugs designed to block the spread of cancer by targeting invading cells have failed.

Several proposed treatments work by inhibiting enzymes called metalloproteinases that dissolve the basement membrane. The reason such therapies have had limited success in clinical trials, Sherwood said, may be because they ignore a pivotal player in cancer progression -- these inflatable protrusions that bulge out from the tumor cell and push the basement membrane aside.

Figuring out how to block the netrin pathway and prevent cancer cells from putting out new protrusions might deprive them of a critical tool they use to spread, Sherwood said.

“Migrating cells have a remarkable repertoire of invasion tactics,” Sherwood said. “This study reveals another trick up their sleeve.”