Contrary to popular belief, North Korea’s is “not a black hole that dooms us to guess work,” nor is the country’s nuclear weapons program a response to fear, says an expert on the secretive nation.

“Their strategy has been the same for decades and that strategy is to force U.S. troops off the peninsula and unify (Korea) under the star flag,” said B.R. Myers, a professor of international studies at Dongseo University in Busan, South Korea, during a talk Tuesday night at Duke.

“Korea is the subject here. The whole nuclear crisis is about the peninsula, it’s not about America first and foremost.”

North Korea, unlike the United States and its allies, is not an economy-first state, but rather a military-first state, Myers added. He said it’s important for any country dealing with North Korea to accurately understand its motives. 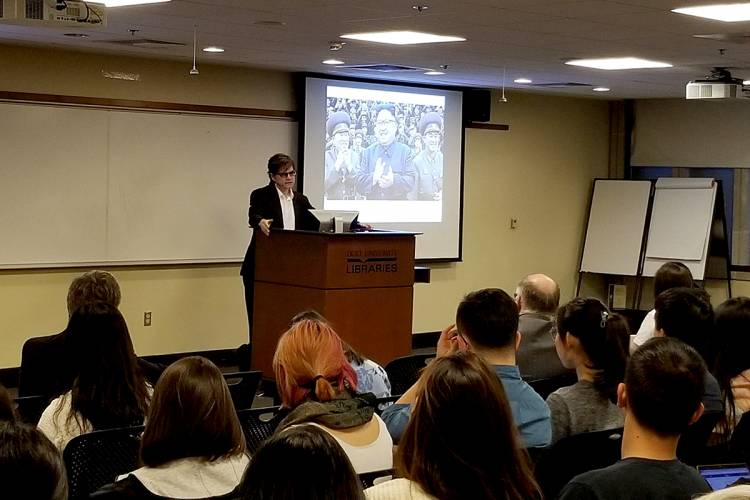 He said the North looks back at the Korean War “with pride because the tiny mountain country fought a nuclearized superpower to a draw, even though Chinese troops did the brunt of the fighting.”

Hawkish American politicians and diplomats have a better grasp of this than their liberal counterparts, he said.

He said the Trump administration has taken an effective step and “tightened the screws” on economic sanctions against North Korea much more than President Obama did.

Trump will visit South Korea and other Asian nations during a visit Nov. 3-14, and how to deal with Pyongyang’s ballistic and nuclear missile threat is expected to top the agenda.

Myers said it’s assumed that the North’s weapons escalation is to gain some advantage in talks, but that’s inaccurate.

“What’s clear now is he (North Korean leader Kim Jong-un) wants to push through the entire nuclear program and then, I think, present the United States with a grand bargain: ‘We dismantle the nuclear deterrent in return for a complete American troop withdrawal.’”

If South Korea decided it didn’t want U.S. troops there, the Americans would leave because we don’t want to be where we are not wanted, he said.

Myers said he believes Kim Jong-un is rushing his missile testing “because he knows he will never get a constellation this good, ever.”

He benefits by the presence of staff within South Korean President Moon Jae-in’s administration who are sympathetic to China and North Korea, an expected economic downturn next year in the South Korean economy that would hurt Jae-in’s ratings and ability to do anything, and an unpredictable president of the United States.

“They want to take advantage of this constellation, for that reason they need to get this nuclear program wrapped up. … It’s certainly not merely for propaganda,” Myers said.

Neither South nor North Korea are likely to bomb each other, he added.

“Unification under the star flag is the only way Kim Jong-un can be secure,” he said.

The talk was organized by the Asian/Pacific Studies Institute (APSI), and co-sponsored by the Duke University Center for International and Global Studies (DUCIGS) and the Duke Korea Forum.

Blue Devil of the Week: Keeping Duke In Step With the Future of Energy