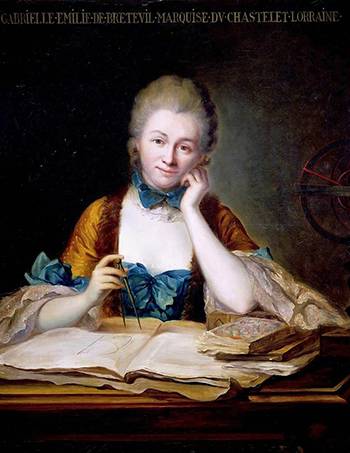 And yet all summer he parked himself in front of a bank of computer screens, a massive stack of digital images of 300-year-old scrawl in front of him, grumbling about French verb conjugations.

It was slow, plodding work. And it just might change the world of academic philosophy.

Gessell is a fourth-year doctoral student in philosophy at Duke tasked with translating a 73-page text written in the 1700s by Emilie du Chatelet. From a rural chateau she shared with fellow philosopher Voltaire, du Chatelet wrote extensively about the science of light -- a topic of broad interest in those days.

Du Chatelet has emerged as a cause celebre of sorts at Duke, where an initiative called Project Vox promotes female philosophers lost to history. Vox is an open access, digital resource that uncovers and houses materials for philosophy teachers to use in classrooms. It is a joint initiative of the Duke University Libraries and the philosophy department.

Where are the female philosophers?

Who Was That Marquise?

Project Vox put Du Chatelet in the spotlight when it debuted in 2015; now, it has posted to its website this new manuscript that du Chatelet wrote but never published. She apparently gave it to a contemporary -- Swiss mathematician Johann Bernoulli II -- who brought it home to Switzerland at some point in the 1700s, where it has remained hidden in an archive.

A Swiss archivist, Fritz Nagel, discovered the essay in 2006, and earlier this year he turned a complete copy over to Duke, where Gessell has created two new digital transcriptions, an old-French to new-French draft and a French-to-English draft as well.

“It’s a wonderful example of a hidden voice,” says Andrew Janiak, chair of Duke’s philosophy department. “She’s a person who really did contribute to scientific life. But she was left out of the history books.”

To prepare this essay for public consumption, Gessell plodded through it one slow paragraph at a time, digesting her thoughts while navigating her prose. Du Chatelet left Gessell with plenty of obstacles -- like her own editing notes that she likely scribbled after the fact. These messy notes are found throughout the document, sometimes creating smudges or smears that make the document difficult to read.

Sadly, “there was no track-changes in the 1700s,” Gessell laments.

Gessell transcribed the document using a software program called LaTeX. A short paragraph took as little as 10 minutes; a long one -- two hours or more. Throughout, Gessell struggled to keep his translation true to du Chatelet’s voice.

“Her style is fairly informal and easy to read,” he says. “I tried to preserve that style in the translation.”

Of course, this process might have been easier had Gessell been fluent in French. He took the language as an undergraduate at Brigham Young University. That was seven years ago. He can’t speak it well or understand it when it’s spoken, but he can read it well enough.

“I want to produce something that scholars can use, and so nobody has to do this work again,” he says.

Du Chatelet’s musings aren’t, in themselves, revolutionary. She builds, as many philosophers of her time did, on the seminal works of Isaac Newton. But she goes further than just regurgitating his findings, as some did back then. She makes her own attempts to build on his theories explaining the phenomenon of refraction -- how light enters and bends as it passes through transparent objects like glass.

“People had no idea what to make of light,” Gessell says. “They didn’t understand how it worked, what it was about, how it related to other things. And all of her work is just amazing when you consider it was basically impossible back then for women to work in science.”