Paul Jaskot believes there’s much to learn where politics and art history intersect.

For more than two decades, the art historian has examined that interplay -- primarily the cultural impact of Nazi Germany prior to, during and after World War II.

A DePaul University faculty member for 22 years, Jaskot this summer moved to Durham, where he is now an art history professor and director of Duke’s Wired! Lab for Digital Art History and Visual Culture.

New to the South, Jaskot considers himself a blank slate of sorts, and is creating a North Carolina-centric class project that he hopes will help him learn a bit about his new home.

What I'm Working On is an occasional series of conversations with Duke faculty members exploring their current areas of scholarship.

Here, he chats with Duke Today about his work and plans at Duke.

Your work has focused at the intersection of art, politics and history. Where does that interest come from?

In my graduate work I kept being drawn to questions of art and revolution, particularly 19th century France. But I realized there was a hole in terms of how the extreme right has also been involved in art. A lot of artists were looking at the left. But very few were looking at the other extreme – how does the right wing get involved?

That led me to a course at Northwestern comparing Hitler and Stalin as art patrons. It became very clear to me, in trying to do my own work on this topic, that there was very little literature on Hitler’s role in the arts. That was outrageous to me, because he was one of the most significant figures of the 20th century, and art historians had very little to say about it. 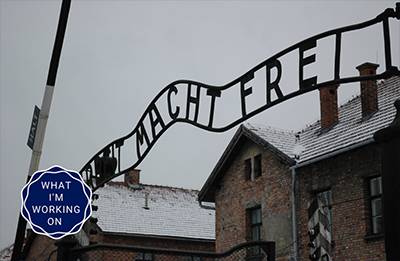 I still think the Holocaust and the Nazi period, from the perpetrator’s perspective, isn’t fully understood in terms of culture and cultural policy. There are thousands of books on the SS and the war and Jewish life and survivors. But if you look at the books on artists at the time, they are few and far between.

Is that because people don’t make that connection?

Yes. In the modern world we see art as benevolent, as helping the human spirit. That is, of course, opposed by Nazism and fascist states. But when you look at any period of art, you see connections between art and oppression. Look at the Egyptians using slaves to build the pyramids.

A lot of my work is in architecture. Next semester I’m teaching a class here about the history of political architecture. I’ve taught that in Chicago, but I need to know more about it in North Carolina. So a student of mine and I are working on a database about every public building in the state.

It’s a lifetime of work. So we have to break it down and look at different types of public buildings. We’re starting with the prison system. Prisons have always been important political and architectural buildings. Eastern State Penitentiary in Philadelphia, for example, is the largest and most expensive building in antebellum America. It’s still there. It’s not a prison, but it’s still there.

North Carolina didn’t get a state penitentiary until after the Civil War. The first was Central Prison in Raleigh. We just found out that it was built by the prisoners. They were paid very little.  I wouldn’t call if slave labor or forced labor, but it was still labor under duress and oppressive conditions.

So it’s more than the look of a building that you’re interested in. It’s the history behind how it was built and where the materials came from?

The same questions of labor and working conditions are very much in play these days in the Gulf states. They’re known for their massive hotels and other buildings. They’re glamorous and they’re tall. They require, basically, indentured labor. That labor is not being monitored. There are horrible practices.

It’s not the same as Hitler’s Germany or 1870s North Carolina. They’re all different systems, economies and politics. But the question about aesthetic choices and the political economy is the same question.

What will be the public good to come from this project?

I see this as a multi-year project involving dozens of students. I’ll be able to do talks and publications from what we learn. And we’ll also, hopefully, have something to say about North Carolina. Every county has a courthouse. There are a lot of prisons. So it’s a way to get to a lot of questions about rural economies -- rural aesthetics and history and politics outside of metropolitan areas.

Given the current political climate, does your work exploring art and fascism have particular relevance?

The questions become more and more relevant because people are interested in how democracies fail and how authoritarianism is implemented. People like me who work on this area are always asking these questions.

The historical comparison that interests people now is with the late Weimar Republic. There’s this moment then after the depression, with an economic crisis, and then an election where Hitler comes to power. And there were far right, far left, and moderate forces all involved. I think the way it collapsed into the Nazi state is very instructive for anyone who wants to think about Democracies and how they can fail.