With polarization rising and truth itself under assault, leading research universities play a more important role in society than ever, said panelists at a Faculty Symposium Thursday.

“There’s never been a time when universities needed to step up more,” said Robert Califf, vice chancellor for Health Data Science and former chairman of the U.S. Food and Drug Agency. “That’s as true in health care as in politics.”

“There was a belief that if information was free the truth would win out,” Califf said. “We’re seeing that that’s not the case. The world’s expert gets no more time on the internet than someone who has a flashy way of saying something.”

The symposium, held at Griffith Film Theater, was part of a two-day celebration of the inauguration of Duke’s 10th president, Vincent E. Price. The two-part symposium was emceed by political science professor Peter Feaver.

The first discussion, moderated by journalist Philip Bennett, who teaches in the Sanford School of Public Policy, focused on the modern research university’s role in public deliberation.

University leaders should model respectful dialogue, panel members said. That includes learning to communicate with those outside the academic bubble.

For instance, just two counties away from Durham, life expectancy is declining, Califf said.  “As long we only talk to ourselves, we’ll heighten divisions that already exist,” he said. “How to talk to people from very different backgrounds is a major challenge. And universities had better lead the way.” 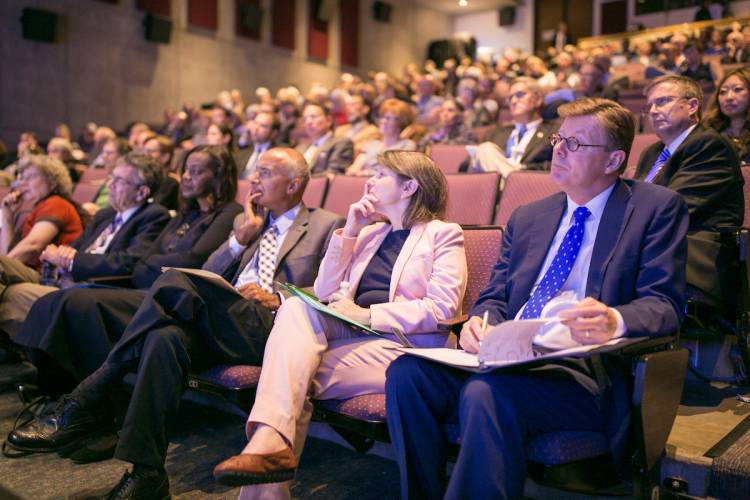 Duke President Vincent E. Price noted that universities can be important conveners, offering space for nonpartisan dialogue. He said that at its heart, public communication centers on problem-solving. It’s important for scholars to focus on problems rather than prematurely pushing solutions, Price said.

“What makes us democratic is that we talk about our disagreements,” Price said.

“I’ve worked with geographers, art historians, biologists,” Daubechies said.  “Compared to other universities, the walls between departments are low, and I’ve found a great openness and willingness to engage.”\ 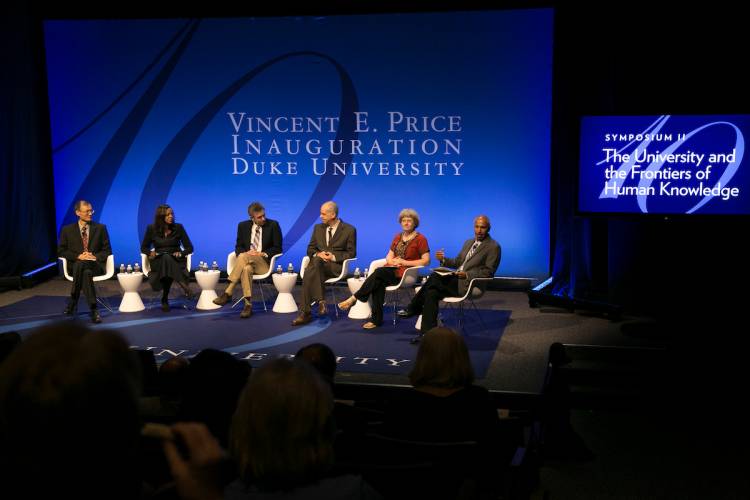 Robert Lefkowitz, winner of the 2012 Nobel Prize for Chemistry, praised a recent “rebirth in the sciences” at Duke and urged university leaders to invest in facilities for scientific research and to actively recruit top faculty, both of which he said were key to Duke’s competitive edge.

Lefkowitz also underlined the importance of basic research. His own research has resulted in many medical applications. But it didn’t start there.

“In my own case, I set out not trying to solve a disease or a problem, but trying to understand how drugs and hormones were able to work on cells,” he said.  “With research, you don’t always know where it’s going. But sometimes wonderful things happen.”

Xi Lian, who teaches in the Divinity School, called upon the university to defend academic freedom, which he said is now under “the greatest threats since the McCarthy period.”

“We’re at a private university, but taxpayers pay for our grants. We have to be ready to explain our contribution to society to the taxpayer who will vote for the next NIH budget,” Sapiro said.

Thavolia Glymph, a professor of Civil War history and African and African American Studies, encouraged the university to consider the role of the humanities. She also said Duke could take greater advantage of its geographic location in the South.

“Duke has done a tremendous job moving us out into the world, with wonderful programs and great work in fields such as global health, for instance,” Glymph said. “I’d like to see us come home and pay more attention to where we are.”

“The kind of interesting work we can do in the world we can also do at home.”