The first thing many people will see at Vincent E. Price’s inauguration as Duke’s 10th president Thursday will be Professor Donald Taylor leading the procession carrying an eight-pound mace.

And one of the ceremony’s highlights will be Trustee Chair Jack Bovender Jr. placing a four-foot long chain of office around Price’s neck, symbolizing his official installation.

These two ceremonial items – the mace and chain of office – have been part of university formal ceremonies, including inauguration, Founders’ Day and commencement, for almost 50 years. But both items remain curiosities to most members of the Duke community. 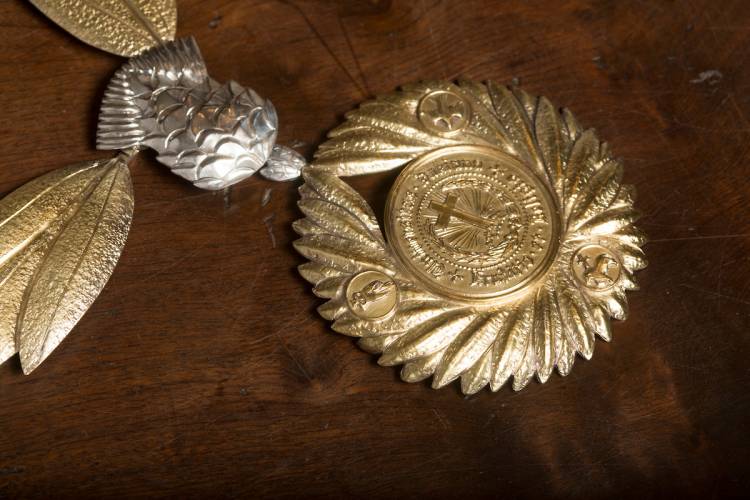 The history of the two items date back to medieval times, where both were traditional symbols of leadership and authority. Over time both were adopted by institutions of higher education throughout Europe and America for formal occasions.

And while traditional maces and chains of offices have common elements, Duke’s versions also feature distinctly local touches, such as decorations of pinecones and tobacco leaves and mottos related to the founding family and university.

The mace and chain of office were given to Duke in memory of Benjamin N. Duke. They were designed by Professor Kurt Matzdorf of New Paltz, N.Y., and made their first appearance at the inaugural ceremony of President Terry Sanford in 1970. 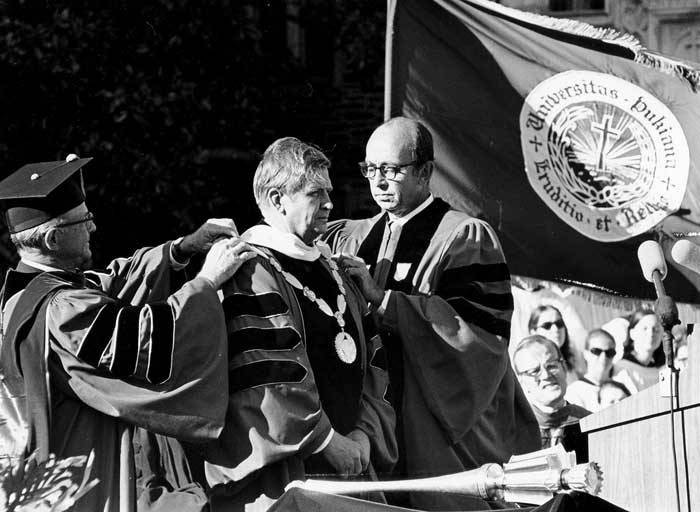 The mace, which looks similar to a torch, is 37 inches long and made of sterling silver. A gold-plated pine cone occupies the lower end of the shaft. The upper end of the shaft displays the inscription “Universitas Dukiana 1838” to mark the year the university originated as Brown’s Schoolhouse in Randolph County.

The mace also carries the Duke motto, Eruditio et Religio, and a crown of laurel leaves on top carries the Duke seal surrounded by the three symbols of the Christian Trinity, indicators of Duke’s origins as Trinity College.

But why a mace? It is a traditional symbol used by many American universities, but it does harken back to the medieval ages when the mace was a military tool, often used by a king’s bodyguard walking ahead of the ruler. As the tool fell out of use as a weapon, it took on more ceremonial responsibilities, including in the United Kingdom’s House of Commons, where it is still used today.

Educational institutions began using the mace for ceremonial purposes since at least the 15th century. And as with medieval times, it is still carried at the front of the procession to mark the arrival of university officials.

The chain of office is a traditional symbol of a distinguished official. The Duke version features a medallion that on the front includes the official university seal surrounded by a laurel wreath where again the three symbols of the Trinity appear. On the back is the coat of arms of the Duke family, with the motto “In Adversis Idem,” meaning “not shaken by the winds of adversity.”

Both the mace and chain of office have been on display near the service desk in Perkins Library, not far from Abele Quad for Thursday’s inauguration ceremony.

Video below by Wil Weldon.

Find Keepsakes and Gifts at Winterfest