Listen to your heartbeat with a stethoscope and you’ll hear a rhythmic lub-dub, lub-dub that repeats roughly 60 to 100 times a minute, 100,000 times a day.

But the normal rhythm of a healthy heart isn’t as steady as you might think, says Hau-tieng Wu, M.D., Ph.D., an associate professor of mathematics and statistical science who joined the Duke University faculty this year.

Rather than beating like a metronome, heart rhythm varies depending on whether you’re asleep or awake, sitting or jogging, calm or driving in rush hour. Breathing rate, brain activity and other physiological signals vary in much the same way, Wu says.

He should know. Before becoming a professor, Wu trained as a medical doctor in Taiwan. In his fifth year of medical school he was doing clinical rotations in the hospital when he was struck by the complex fluctuations in heart rhythm during anesthesia and surgery.

Where some saw noisy patterns -- such as the spikes and dips on an electrocardiogram, or ECG -- Wu saw hidden information and mathematical problems. “I realized there are so many interesting medical data that aren’t fully analyzed,” Wu said.

When a patient is in the hospital, sensors continuously monitor their heart rate and rhythm, breathing, oxygen saturation, blood pressure, brain activity and other vital signs.

The signals are sent to computers, which analyze and display the results and sound an alarm if anything veers outside normal ranges.

An ECG, for example, translates the heart's electrical activity into a squiggly line of peaks and valleys whose frequency, size and shape can change from one moment to the next.

Wu is using techniques from differential geometry and harmonic analysis to detect patterns hidden in these oscillating signals and quantify how they change over time.

His methods have been applied to issues in cardiology, obstetrics, anesthesiology, sleep research and intensive care. 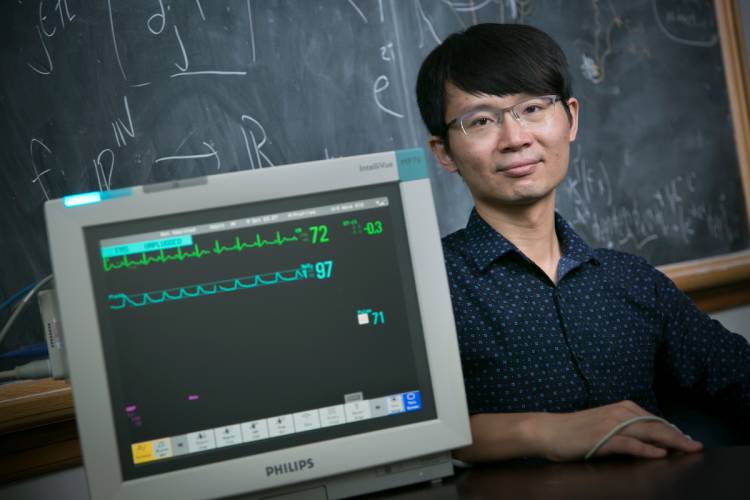 In one study, Wu and colleagues developed a new way to analyze variation in the time between heartbeats to help monitor the depth of anesthesia during surgery. The approach could complement brain wave-based measures for better sedation control.

Wu has also been working on ways to analyze the data collected by optical heart rate monitors in activity trackers such as the Apple Watch and Fitbits, which shine light onto the skin to measure blood flow. The signal processing technique they developed lets users monitor moment-to-moment changes in heart and breathing rates from photo sensors more accurately than previous methods, even during intense physical exercise.

Wu and colleagues have used similar methods to analyze data from ECG sensors worn on a pregnant woman’s belly and separate the mixed heart signals from mom and baby. The idea is to better detect abnormal heart rhythms that might be signs of fetal distress during pregnancy or labor.

Wu has also proposed algorithms that screen for sleep apnea using data collected by wearable piezoelectric sensors that record how the chest and abdomen move with breathing, and that classify sleep stages using single-channel electroencephalography (EEG) to record brain waves. Unlike traditional sleep studies which are usually done in a hospital, the signals they analyze can be recorded at home.

Wu grew up in the port city of Kaohsiung, Taiwan. He showed an interest in math from an early age, but his parents urged him to study medicine instead.

“It is a culture thing, and I feel so lucky about it, since eventually I fell in love with medicine by getting my hands dirty and was attracted by its complexity,” Wu said.

He earned his medical degree from Taiwan’s National Yang-Ming University in 2003, and then practiced as a resident at Taipei Veterans General Hospital for about two years before switching to mathematics.

While he was still in medical school, Wu began studying mathematics with National Taiwan University professor Chin-Lung Wang, who encouraged him to pursue a doctorate.

He earned his Ph.D. in math in 2011 under the guidance of mathematician Ingrid Daubechies at Princeton, where he also worked on high-dimensional machine learning with Amit Singer.

Wu was awarded a 2015 Sloan Research Fellowship and a 2017 Early Career Award in Applied Mathematics.

He was among nine faculty hired in 2017 as part of the new Quantitative Initiative, launched by Duke Provost Sally Kornbluth to foster greater collaboration across the sciences and between the health system and university sides of Duke.

When he’s not working, Wu is an avid reader of Japanese manga comics and graphic novels. “I’ve been a fan of manga for more than 20 years,” Wu says. “I’m a nerd. I know.”

This Winter, Help the Birds With a Homemade Feeder