DURHAM, N.C. -- Chimps don’t care if they’re caught cheating. But preschoolers do, and that’s one of the keys to what makes us human, says Michael Tomasello, professor of psychology and neuroscience at Duke University.

He should know. Tomasello has spent 25 years comparing human children to our nearest primate relatives, the great apes.

Tomasello gave a lecture on his work Sept. 7 in Griffith Theater, where nearly 400 people gathered in honor of his election to the prestigious National Academy of Sciences.

The differences between the human mind and the mind of an ape, he says, are more subtle than you might think.

“It’s not that humans are smarter than apes across the board,” Tomasello said.

In one study, Tomasello and colleagues developed a battery of mental tests and gave them to 106 chimpanzees, 32 orangutans and 105 human 2-year-olds.

The 2-year-olds and chimpanzees did equally well on tests with inanimate objects, such as locating hidden food, understanding more and less, and using a stick or a rope to get something that’s out of reach.

But the children scored twice as high as both the chimps and the orangutans on tasks of social cognition, such as learning how to do something from watching someone else do it, or finding something by following someone’s gaze or point.

“It’s social cognition -- the ability to learn from others, and cooperate and communicate with others --  that enables humans to do things that great apes don’t,” said Tomasello, who also holds joint appointments in the departments of philosophy and evolutionary anthropology.

Our more social nature makes us a naturally cooperative species. Studies show that, from an early age, children are quick to help others -- even strangers -- in ways that our closest primate relatives are not.

Children as young as three will continue to work together until everyone gets their part.

Chimpanzees, in contrast, are more interested in their own personal gain. Once one of them gets their reward, Tomasello said, “it’s game over.”

Young children work together to get toys and treats, even if it means taking turns, and once they score them, they make sure to divide the spoils fairly so that everyone gets their share.

Collaboration doesn’t matter to chimps. Chimps are just as likely to keep food all to themselves whether they got it through joint effort or not.

“If human hunter-gatherers kill something they take it back to their village and share it around,” Tomasello said. “When a group of chimpanzees tries to catch a monkey, whoever captures it tries to very quickly eat it before the others arrive.”

"But it's not all kumbaya for humans,” Tomasello said. “We also resent people who don't pull their weight.”

Studies show that children don’t share as much with free riders.

Young children don’t want to seem like cheaters or slackers to others, either. In another study, 5-year-olds shared more, and stole less, when they were being watched than when they were alone.

“Chimps didn’t care,” Tomasello said. They behaved the same whether they were being watched or not.”

Over the years, studies by Tomasello and others have shown that apes are remarkably skilled at understanding what others want, what others might know based on what they can see, even grasping that not all things inside someone’s head correspond to reality. But they do these things mainly to exploit or compete with others.

Tomasello says the reason why humans became so collaborative and apes didn’t may be at least partly because humans, unlike apes, rely on each other to get food. 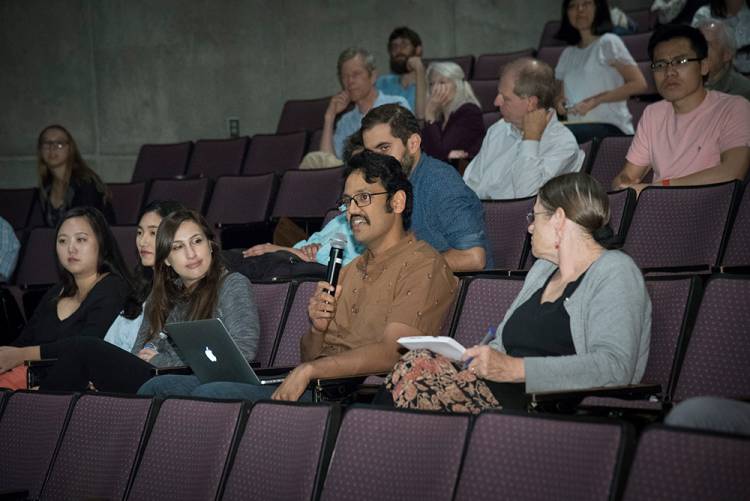 In the course of human evolution, cooperation was essential for activities like hunting large game. “If I’m a bully and I hog all the food, then nobody chooses me as their foraging partner next time,” Tomasello said.

In other words, we evolved to play nice because we had no other choice. “It was either cooperate or starve to death.”

Tomasello says human children, unlike apes, develop what he calls a “shared intentionality” -- they come to see themselves as belonging to a larger whole whose members works together for mutual benefit.

Over time, Tomasello said, this small psychological difference made a huge difference in human evolution.

“It may help explain why apes are endangered species, and we are here using complex computer technology and linguistic symbols at a 100-year-old university,” Tomasello said.

Michael Tomasello earned a B.A. in psychology from Duke in 1972, and returned in 2016 after nearly 20 years as co-director of the Max Planck Institute for Evolutionary Anthropology in Leipzig, Germany.

Most of Duke’s Workforce Fully Vaccinated

Despite 79 percent of the University workforce being fully vaccinated, COVID-19 vaccination push continues