When it comes to neutrino experiments, bigger is usually better. Super-Kamiokande in Japan, home to the Nobel-prize winning discovery that neutrinos have mass, is an underground tank of water about the size of football stadium. And at the South Pole, the IceCube Neutrino Observatory occupies a cubic kilometer of volume within the Antarctic ice.

So it may come as a surprise that a block of salt no larger than a toaster has become the first to capture a special type of neutrino behavior that has eluded scientists for over forty years.

“I think this discovery is going to usher in an age of miniaturized neutrino detectors,” said Phil Barbeau, an assistant professor of physics at Duke University and data analysis coordinator for the result. The team that made the discovery, called the COHERENT Collaboration, announce their findings in a paper appearing online Aug. 3 in Science.

The detector, a 32-pound crystal of cesium iodide paired with a highly sensitive light detector, observed a tiny bump created when a neutrino ricocheted off an atomic nucleus, an effect called coherent elastic scattering. Though this effect was theoretically predicted more than four decades ago, its signals are so small that researchers have been unable to see them until now.

Physicists are excited about the discovery because careful measurements of coherent elastic scattering could be a powerful tool for testing the limits of the Standard Model, physicists’ best guess at an overarching mathematical description of the universe.

“This is useful not just for studying the fundamental properties of neutrinos themselves, but also using their interactions to constrain our knowledge of nuclear physics, the Standard Model and possible extensions beyond the Standard Model,” said Grayson Rich, a University of North Carolina graduate student who works with Barbeau in the Triangle Universities Nuclear Laboratory (TUNL).

“This discovery is exciting in and of itself, but it really is just step zero. But it’s a pretty big step zero,” said Rich, who played a very important role analyzing the data from the detector. 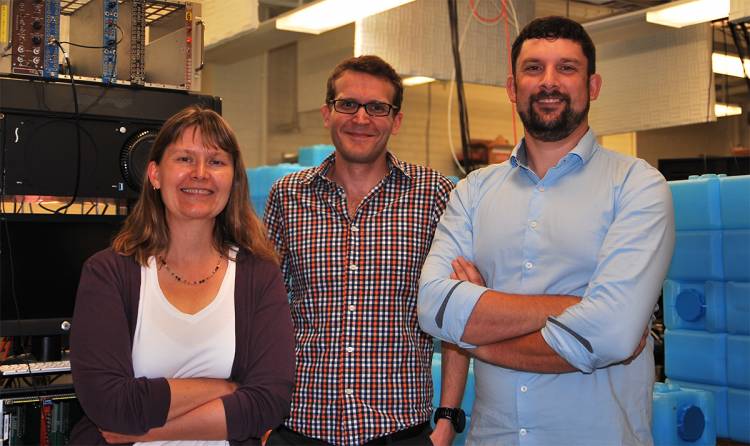 Neutrinos, miniscule subatomic particles that rarely interact with matter, are often described as “ghost-like.” Chargeless and nearly without mass, trillions of neutrinos pass through our bodies every second, but we have no way feeling them. Larger detectors are usually better for spotting neutrinos because they simply have more matter for the neutrinos to interact with, making it that much more likely that they will be able to catch at least one of the rare events.

But detecting coherent elastic scattering is a little different from detecting other types of neutrino interactions, said Kate Scholberg, a professor of physics at Duke and spokesperson for the COHERENT collaboration. Scattering interactions occur much more often, but are also much lower in magnitude, than some of the other behaviors. As a result, smaller but extremely sensitive detectors can be more effective.

In 2014 Scholberg and Barbeau joined with other particle physicists from around the world to form COHERENT, a research team dedicated to observing coherent elastic scattering resulting from intense bursts of neutrinos created by the Spallation Neutron Source (SNS) at the U.S. Department of Energy’s Oak Ridge National Laboratory.

The SNS target is a torpedo-shaped vessel filled with liquid mercury that “spalls” neutrons when hit with a beam of protons, and also creates pulses of low-energy neutrinos as a by-product. The collaboration set up shop in a hallway about twenty meters away from the SNS, where thick concrete walls block interference from wayward neutrons while letting the tiny neutrinos fly straight through.

The hallway, known as “neutrino alley,” now houses six miniaturized detectors all poised to observe neutrinos as they whiz by. The detectors are each designed to fit on a three-foot by three-foot pallet for easy transport, and have been given names like NaIvE (pronounced like naïve) and TheLeadNube. Some of them even tweet.

But it was the runt of the bunch, designed by researchers at the University of Chicago, that made the big discovery.

“It is the world’s smallest working neutrino detector,” Scholberg said.

“It really is just a tiny little cylinder of salt, more or less,” Rich said. “One person can carry it.”

Just because the cesium iodide detector was the first to observe coherent scattering doesn’t mean that the others won’t get their turn. The team hopes to detect neutrinos with all six of the detectors, each of which is made with a different target material that interacts with neutrinos to a different degree. That should give them more robust measurements and detailed tests of Standard Model predictions.

“This is something that no one has been able to observe for over 40 years, and so, in order to really make an unambiguous measurement, we are going to measure it with different targets,” Rich said.

And they might not stop at six targets. Barbeau’s lab at TUNL is a veritable incubator for additional small detectors. On summer afternoons the space is buzzing with high school, undergraduate and graduate students from schools around the Triangle, working side by side to construct mini-detectors from reclaimed materials and used equipment.

“Now that we have finally showed that we can do this, you can imagine a very deep and interlaced research program looking for all sorts of new physics on an axis that other types of experiments just can’t really show,” Barbeau said.

This research was supported in part by the U.S. Department of Energy (DOE) Office of High Energy Physics and by the U.S. DOE Office of Nuclear Physics.

University and Health System Obituaries for 2020