History: While detailed financial and academic records were kept as far back as the founding of what was then Trinity College in 1838, the first registrar wasn’t appointed until Dallas W. Newsom assumed the office in 1899.

While documents show the position existed, it went vacant from 1921-1953 as individual schools kept their own records. But Richard L. Tuthill took the job of University Registrar in 1953 in an effort to centralize the institution’s record-keeping.

Frank Blalark, the current assistant vice provost and university registrar, has had the role since 2015. He presides over an office that has recent records online, bound copies of older records and microfilm of even older ones. 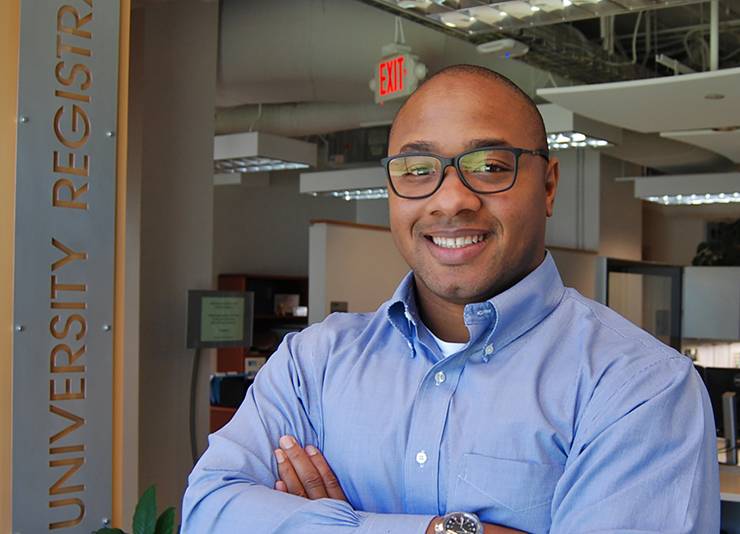 What the office does: As keeper of the university’s academic records, the Office of the University Registrar is vital to the institution’s function.

The office reports enrollment data to government agencies and accrediting bodies. It provides the information on student athletes necessary to stay compliant with NCAA rules.

The office produces every diploma and keeps records of everyone who’s earned a Duke degree.

In essence, it is where all of Duke’s academic data lives.

“On the academic side, the record ties everything together,” Blalark said.

How the office makes a difference: The Office of the University Registrar usually does its work away from the spotlight. But twice a year, it’s front and center.

“Registration is one of our most visible activities across campus,” said assistant registrar Kristin Bonifer. “If we do our job right any other time, students shouldn’t know who we are. … If it goes wrong, there are very big, very visible consequences. We strive hard to avoid that and make sure students have a positive experience.”

Blalark said he and the staff come in early on those days, gather in a conference room and closely monitor the online system students use to register.

“Think about the launch of a space shuttle,” Blalark said. “It’s like we’re all sitting in the control room.”

What the department can do for you: Blalark said one of the more interesting things his office handles are questions relating to the past. He said it’s not uncommon to get calls from people hoping to verify old records, whether it be for a family member or someone who’s burst into the public eye.

“If you think about it, admissions and financial aid are related to a point in time and forward, records are forever,” Blalark said.

Significant achievement: Blalark points to DukeHub as a recent project that has proven successful. The online system which debuted in 2016 was the result of a collaboration between the Office of the University Registrar, the Office of Information Technology and Student Information Services & Systems. It allows students and faculty to access academic information in a more efficient way.

Big goal: Among the projects the office is tackling now is helping Duke Kunshan University set up its own registrar’s office and prepare Duke University for its upcoming once-a-decade accreditation process by the Southern Association of Colleges and Schools.

Hidden fact: It’s not unusual for people to be confused when Blalark tells them his title.

“Some students don’t know the registrar is a person, they think it’s an office,” Blalark said.

Duke's Lab Benches Start to Reopen, But With Social Distancing

More than 1,500 researchers back in labs with more buildings to reopen shortly