DURHAM, N.C. -- The H.L. Hunley, the first combat submarine to sink an enemy ship, also instantly killed its own eight-man crew with the powerful explosive torpedo it carried, according to new research from a Duke University Ph.D. in biomedical engineering.

The Hunley’s first and last combat mission occurred during the Civil War on Feb. 17, 1864, when it sank a 1,200-ton Union warship, the USS Housatonic, outside Charleston Harbor, South Carolina. The Hunley delivered a blast from 135 pounds of black powder below the waterline at the stern of the Housatonic, sinking the Union ship in less than five minutes. Housatonic lost five seamen, but came to rest upright in 30 feet of water, which allowed the remaining crew to be rescued after climbing the rigging and deploying lifeboats.

The fate of the crew of the 40-foot Hunley, however, remained a mystery until 1995, when the submarine was discovered about 300 meters away from the Housatonic’s resting place. Raised in 2000, the submarine is currently undergoing study and conservation in Charleston by a team of Clemson University scientists.

Initially, the discovery of the submarine only seemed to deepen the mystery. The crewmen’s skeletons were found still at their stations along a hand-crank that drove the cigar-shaped craft. They suffered no broken bones, the bilge pumps hadn’t been used and the air hatches were closed. Except for a hole in one conning tower and a small window that may have been broken, the sub was remarkably intact.

Speculation about their deaths has included suffocation and drowning.

But after an exhaustive three-year Duke study that involved repeatedly setting blasts near a scale model, shooting authentic weapons at historically accurate iron plate and doing a lot of math on human respiration and the transmission of blast energy, researcher Rachel Lance, a 2016 Ph.D. graduate of Duke Engineering, says it was a powerful shockwave from the Hunley’s weapon that killed the crew.

In a paper appearing Aug. 23 PLOS One, Lance calculates the likelihood of immediately fatal lung trauma to be at least 85 percent for each member of the Hunley crew.

The Hunley’s torpedo was not a self-propelled bomb, as we think of them now. Rather, it was a copper keg of gunpowder held ahead and slightly below the Hunley’s bow on a 16-foot pole called a spar. The sub rammed this spar into the enemy ship’s hull and the bomb exploded. The furthest any of the crew was from the blast was about 42 feet.

Lance says the crew died instantly from the force of the explosion travelling through the soft tissues of their bodies, especially their lungs and brains. She says the crippled sub then drifted out on a falling tide and slowly took on water before sinking.

“This is the characteristic trauma of blast victims, they call it ‘blast lung,’” said Lance, who worked as a biomechanist at the U.S. Navy’s base in Panama City, Florida for three years before entering graduate school at Duke. “You have an instant fatality that leaves no marks on the skeletal remains. Unfortunately, the soft tissues that would show us what happened have decomposed in the past hundred years.”

Blast-lung is a phenomenon of something Lance calls “the hot chocolate effect.” The shockwave of the blast would travel about 1500 meters per second in water, and 340 m/sec in air. ”When you mix these speeds together in a frothy combination like the human lungs, or hot chocolate, it combines and it ends up making the energy go slower than it would in either one,” thus amplifying the tissue damage. Lance said that when it crossed the lungs of the crewmen, the shockwave was slowed to about 30 m/s.

While a normal blast shockwave travelling in air should last less than 10 milliseconds, Lance calculated that the Hunley crew’s lungs were subjected to 60 milliseconds or more of trauma.

“That creates kind of a worst case scenario for the lungs,” Lance said. Shear forces would tear apart the delicate structures where the blood supply meets the air supply, filling the lungs with blood and killing the crew instantly. It’s likely they also suffered traumatic brain injuries from being so close to such a large blast, Lance added.

Traumatic blast injuries have unfortunately become a familiar part of recent U.S. military history, but “the injuries experienced by soldiers in a Humvee who hit an IED are different because they are injured mostly by shrapnel and the destruction of the vehicle,” Lance said. “In that case, there are shrapnel effects and effects from the damage to the vehicle that cause broken bones and other injuries. But the crew of the Hunley were protected by the hull. It was just the blast wave itself that propagated into the vessel, so their injuries would have been purely in the soft tissues, in the lungs and in the brain.” 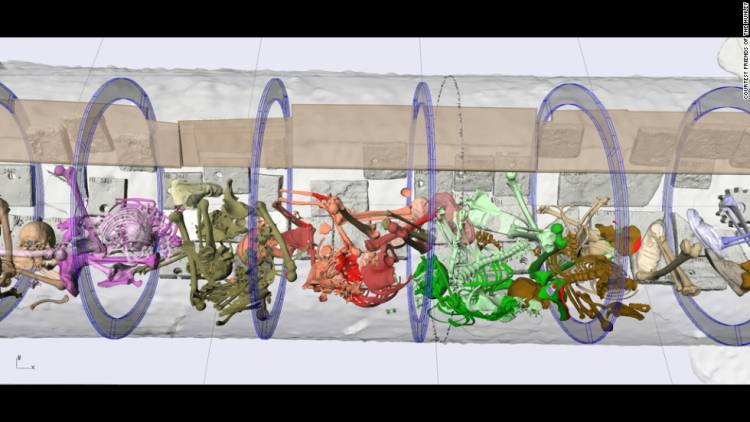 The sub’s design was known to be precarious. During development and testing, the Hunley had sunk twice, drowning 13 crewmen including its namesake, Horace L. Hunley, a privateer who had the submarine built from an old ship’s boiler in Alabama in 1863.

Lance says the designers of the powderkeg weapon also may have recognized the dangers of being too close to a blast in water. Her historical research found that they stayed hundreds of yards away from test blasts of devices that were significantly smaller than the bomb that sank the Housatonic.

“Blast travels really far underwater,” Lance said. “If you’re practicing 200 yards away, and then you triple the size of your bomb and put it 16 feet away, you have to be at least aware that there’s a possibility of injury.”

Lance’s calculations are based on tests she did with a 6-1/2 foot mild steel scale model of the Hunley she had built for her experiments. Fitted with interior sensors and floated in water, the model sub was subjected to a series of pressurized-air blasts and scaled black powder explosions. For several reasons, her scale-model blasts ended up being somewhat weaker than what the Hunley crew experienced.

Scholars at Clemson who have been painstakingly removing concretions from the sub’s cramped interior to learn more about its fate have been evaluating several possible explanations: among them, the crew suffocated, they drowned, a ‘lucky shot’ from Housatonic’s small arms fire breached the hull, or shear forces broke a valve and the sub flooded rapidly.

But Lance has tested and ruled out all of those ideas. “All the physical evidence points to the crew taking absolutely no action in response to a flood or loss of air,” she said.

Lance says her evidence points to a very sudden, soft-tissue injury, rather than drowning or suffocation. “If anyone had survived, they may have tried to release the keel ballast weights, set the bilge pumps to pump water, or tried to get out the hatches, but none of these actions were taken,” she writes in her paper, which is part of her dissertation research.

The research was supported by the Josiah Charles Trent Memorial Foundation Endowment Fund at Duke University, the Department of Defense SMART Scholarship Program, the US Army MURI program (U Penn prime - W911NF-10-1-0526) and an Exploratory Research Grant from the Hagley Library’s Center for the History of Business, Technology and Society.

Lance is working on a book about the Hunley and the experiments that were required to solve the mystery.

The full journal article can be found here in DukeSpace, the university's online repository of online-research. A blog post by Rachel Lance here describes the publication of her research in an open access journal.