DURHAM, N.C. -- Body odor. To some it's an embarrassing nuisance. But to meerkats, it's a calling card.

These sociable South African members of the mongoose family produce a pungent “paste” in a pouch beneath their tails that they smear on plants, rocks and even other meerkats to mark their turf. With one whiff they can tell if a scent belongs to a relative, a rival or a potential mate.

But the chemical signals in this stinky graffiti don’t come from the meerkats themselves, researchers report. They’re made by odor-producing bacteria that thrive in the meerkats’ gooey secretions.

Lots of animals, from insects to humans, give off distinctive scents that help them distinguish each other and find and choose mates, said study co-author Christine Drea, professor of evolutionary anthropology at Duke University. “The question is: how did they get it?” Drea said. Are their unique body odors genetically inherited, picked up from the environment, or do they come from somewhere else? 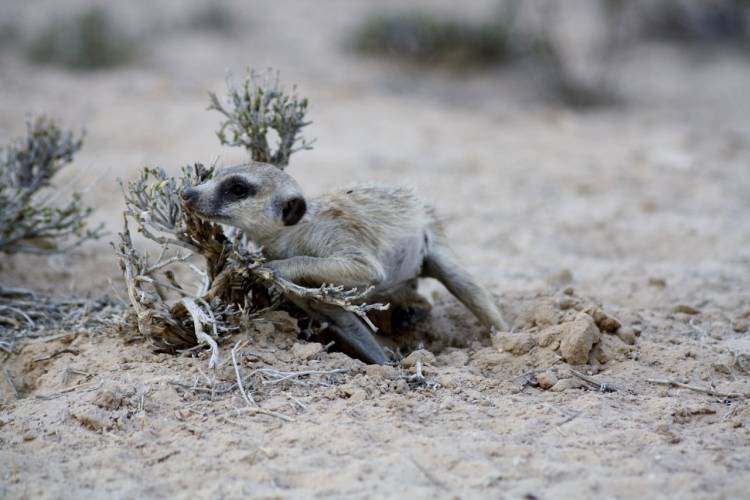 The researchers then identified the types of bacteria living in meerkat paste by looking at gene sequences. They also analyzed the complex mixtures of chemicals that give the paste its musky odor using a technique called gas chromatography-mass spectrometry.

Meerkat scent marks are too subtle for most humans to see or smell in the field, but they’re teeming with life, said Leclaire, currently a research associate at the National Center for Scientific Research in Toulouse, France.

“The odor bouquet isn’t because of shared genes, but because they share bacteria,” Drea said.

The idea that microbes might be an important source of animal scent signals isn’t new. But even though the “fermentation hypothesis” for chemical communication was first proposed decades ago, figuring out which types of bacteria animals harbor was tricky because so many of the world’s bacterial species have yet to be described, and only a small fraction of them can be isolated and grown in the lab. Next-generation gene sequencing has now made it possible to analyze microbial communities that are difficult or impossible to identify by other methods.

Meerkats aren’t the only animals that outsource some of their chemical cues to microbes: earlier studies suggest that hyenas, badgers, bats, elephants and other species do too, including humans.

“Virtually all of the tell-tale odors in human armpits come from bacteria,” Drea said. These bacteria don’t just make us stink, she added. The odors they give off help us distinguish kin from strangers, and choose among potential mates.

Animals evolved surrounded by microbes, Drea said. Although bacteria are often viewed as harmful germs that make us sick, the bacteria that live on animals’ skin, scales, feathers, fur, as well as in their guts and scent glands, “are also performing services that are beneficial,” Drea said. “They’re not just helping them make vitamins and digest food, they’re also responsible for a significant portion of the chemicals animals use to communicate.”

Faculty and staff who refer a candidate may be eligible to receive monetary rewards of up to $1,000