The ceremony marked the end of both David Rubenstein’s four years as chairman of the Board of Trustees and of Richard H. Brodhead’s 13 years as university president. The two leaders have been at the center of a variety of initiatives that have raised Duke’s reputation around the world and brought new resources dedicated to making a Duke education more accessible for talented students.

Both were honored during the ceremony.

Rubenstein was selected to give the commencement address, an honor for which he apologized to the Class of 2017. “To be honest, I was also quite disappointed at this year’s selection of a commencement speaker,” Rubenstein said to laughs. “I wanted to hear someone certain to be far more enjoyable or more inspiring than I can ever be.” (Read his speech here.)

Rubenstein advised students to carry the title of “Duke graduate” with pride but also to ensure they continue a Duke alumni tradition of community service. In one emotional moment, he noted it was Mother’s Day, the first he has celebrated since his own mother recently died. She was never so proud of him, Rubenstein said, as when he used his philanthropy to help society.

He also paid tribute to Brodhead. Many people have done much to make Duke “a beautiful place where scholarship and learning, commitment to society, true student athletes, and school spirit come together in a wondrous way,” but special attention must be paid to the president’s role, Rubenstein said.

Brodhead has been “an indispensable guiding force behind Duke’s growth in stature and emergence as a great national and global university. … All of us who care about Duke are and always will be in your debt.”

The morning began under a bright sun but still unseasonably cool. Families walked across both East and West Campus under a slight chill, with a heavy dew glistening on the campus lawns.

But by the time the march of the graduating students began at 9 a.m., Wallace Wade Stadium was heating up.  Most visitors gathered on the east or shady side of the stadium, but for those in the sun, Duke Stores gave away some 12,000 free bottles of water, some 8,000 of which were gone by 8:45 a.m.

A similar number of Duke fans were handed out and used by students and visitors to cool themselves and block the sun.

Visitors entered the stadium to the music of the Duke Wind Symphony, under the direction of Verena Mosenbichler-Bryant. The symphony set the tone for the ceremony with a selection of pieces strong on ceremony and flair – from John Williams’ Olympic Fanfare to a medley of popular marches.

The students themselves walked in to Ralph Vaughan Williams’ “Flourish for Wind Band” followed by Edward Elger’s traditional “Pomp and Circumstance.” Their entrance march was captured by video broadcast on the large screen behind the ceremony platform. Each student’s smile and wave brought a new round of cheers.

An hour later, the final word went to Brodhead.  For the 13th time he ended commencement by awarding degrees to each of the graduates of the 10 university schools with a wave of the hand and some variation of the phrase “By the authority invested in me… .”

This time, after the awarding of degrees, he stopped and asked the audience’s leave for a personal message of his own. He told the Class of 2017 that they were joining the ranks of 160,000 Duke alumni around the world “who are leading and serving their communities” and charged them to find their own way to do the same.

He thanked the faculty for their support during his time and for their mentoring of the students. He extended the thanks to Duke staff, past students, alumni, university friends and parents.

“And last, Class of 2017, you have enriched our university community with your ideas, energy, determination and spirit,” Brodhead said. “It has been my privilege to serve as this university’s president.” 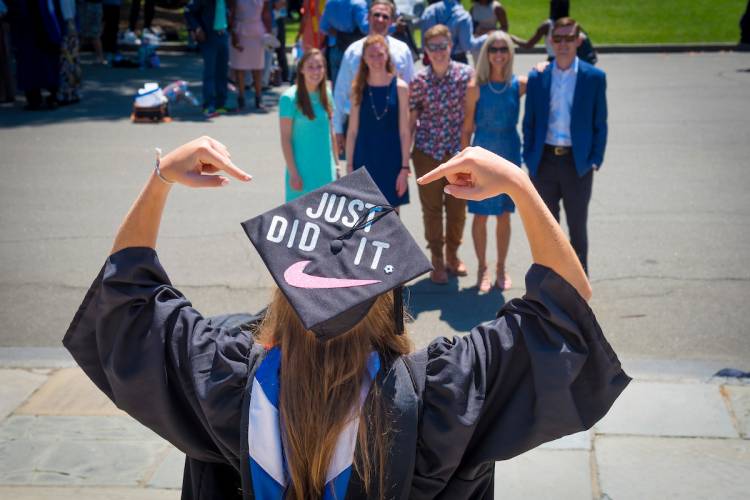