Duke President Richard H. Brodhead presented the winners with a Presidential Medallion and $1,000 at a luncheon at the J.B. Duke Hotel. Fifteen Meritorious Award winners were also honored.

The Presidential Award, one of Duke’s highest honors, is given to staff and faculty for outstanding job performance and distinctive contributions within the past calendar year. The awards are presented in five categories: Clinical/Professional Non-Managerial, Service/Maintenance, Managerial, Executive Leadership, and Clerical/Office Support.

“In every workplace, there are people who do things a little bit better than other people, who set the level that everybody aspires to,” Brodhead said. “We speak of culture. Everyone knows you cannot dictate a culture from a management position. Culture is created by the way people live their lives and the way they do their work. I will say we are honoring today the people that not only exemplify the culture that we aspire to, but the people who are the bearers of that culture in all the different zones of this university.”

Here are the Presidential Award recipients for 2016 with President Brodhead, at left: 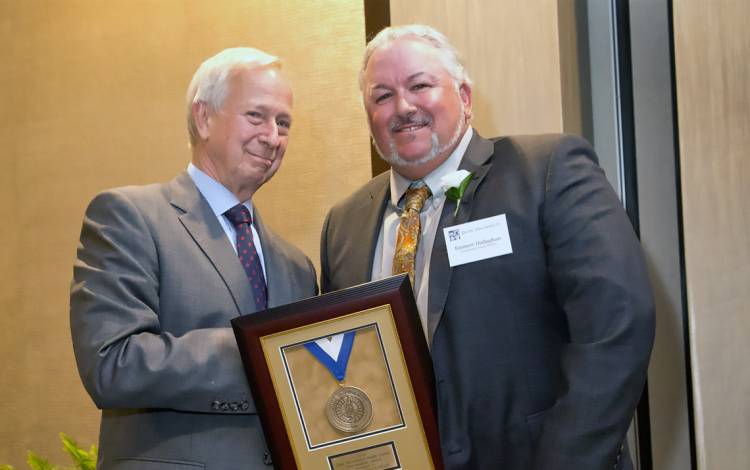 Dullaghan earns praise for the positive attitude he brings to his work and his team. His versatility has allowed him to play roles both large and small in several projects. And his commitment to detail has made his work safe and efficient. Supervisors say he’s often customer’s first choice.

A prime example of Dullaghan’s diligent approach to the job came when he was tasked with rebuilding a complicated high voltage system for athletics and did so with no power interruption.

“He is one of those rare individuals who actually works on several different jobs, performing different tasks in each,” Russell Thompson, director of utilities and engineering for the Facilities Management Department, wrote in the nomination. “… I believe that Emmett’s effort to make Duke a safer and better place must be recognized. Emmett Dullaghan is a valued employee who is always ready and willing to do whatever it takes to keep us up and running.” 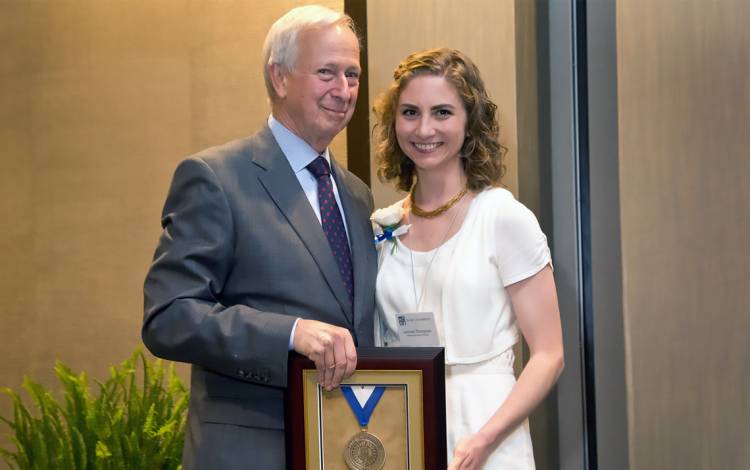 Thompson has the respect of her co-workers thanks to her calm, confident demeanor and her ability to serve as an approachable teacher for new nurses.

She played a pivotal role in the development and implementation of the Early Nurse Intervention Team, which provided an efficient way to handle emergencies. She also helped lead the development of the Mock Code Blue Team, which has improved the hospital’s responses to the most serious situations.

“Laryssa is a person who is able to readily identify opportunities for systems improvement,” Amelia Wright, a clinical lead in the Critical Care Unit, wrote in a recommendation. “However, Laryssa has a rare quality in that she not only identifies problems; she comes to the table with solutions.”

Data has already shown that the ideas Thompson championed have resulted in demonstrably better patient outcomes. 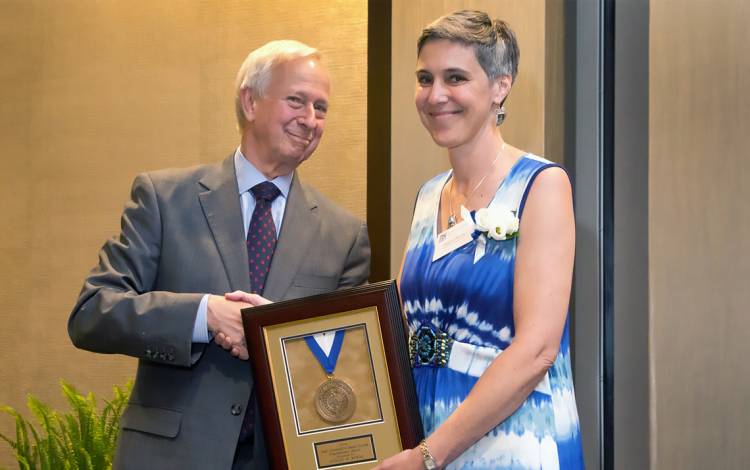 Burns was called “the foundation and organizational power of the Fitzpatrick Institute for Photonics” by Nan Marie Jokerst, a professor of electrical and computer engineering. Aside from helping create an inclusive atmosphere and serving as a warm, accommodating host to visiting scholars and students who are new to the area, Burns organized last fall’s successful “Introduce a Girl to Photonics” outreach event.

The program drew roughly 550 girls to campus to learn about light technologies and the work done at the Fitzpatrick Institute.

“Burns is a great, if not the greatest, asset to FIP (Fitzpatrick Institute for Photonics ) for her commitment to making sure we have assistance with our work, but she is an even greater asset to Duke University for sharing the great things we do at Duke with our larger Durham community,” Associate Professor Sina Farsiu wrote in a recommendation. 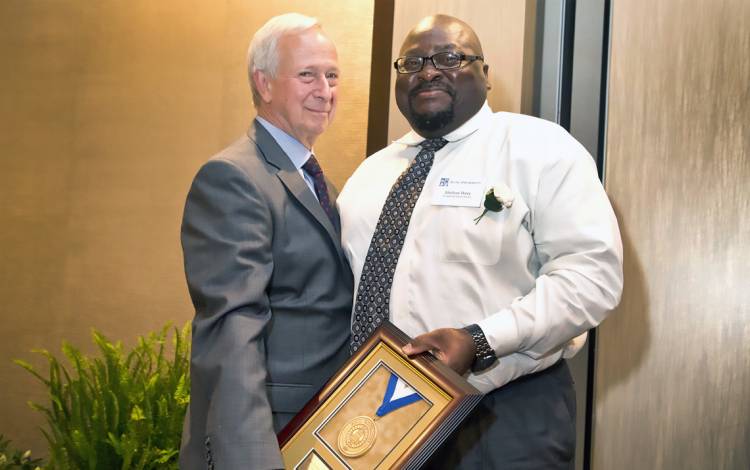 Perry’s role at the DHTS Service Operations Center is that of motivator, troubleshooter and friend. With nearly three decades of experience at Duke, he earns praise for his ability to resolve technical problems while keeping lines of communication open with customers.

He’s also fosters a climate of selflessness among his staff. One co-worker told of how he brought food to staffers who were on duty and stuck in the office during an ice storm.

“He encourages partnership and teamwork across a diverse IT landscape where working together generates success for everyone,” Lisa Berry-Setliff, a senior manager for IT with Duke Health Communications Center, wrote in a recommendation. “Shelton creates a work environment for his team that fosters the confidence to step into new challenges, which in turn bolsters a sense of pride, friendly competition and the drive to contribute to a world beyond themselves.” 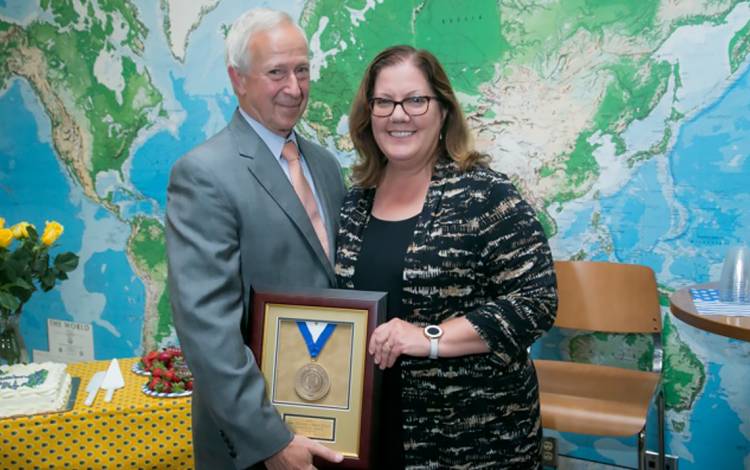 Kelso’s co-workers praise her ability as a mentor and for the trusting, collaborative environment she’s created. During her time as the head of the Global Education Office, she’s made staff additions that have made work more visible and enriched the student experience. She’s also tackled a variety of issues with calm and compassion.

Recently, she developed protocols and training to respond to reports of sexual misconduct during study away programs.

“Amanda not only shows her dedication to quality on an operational level, she also has demonstrated this in her genuine care and desire to assist students at Duke,” wrote Soraya Campbell, assistant director/regional manager in the Global Education Office for Undergraduates. “She is dedicated to the idea that international education should be accessible to all, regardless of means, identity or disability.”

These 15 Duke employees received a 2016 Meritorious Award for their contributions to Duke University and Duke University Health System. During the Presidential Awards Luncheon on April 20, they received an award and a check for $100.

Reforming College Fraternities, Finding Health Care and Trauma in Children: Duke in the News This Week