Crustaceans that thrive in the vastness of the open ocean have no place to hide from their predators.

Consequently, many creatures that live at depths where sunlight fades to darkness have developed transparent bodies to be less visible when spotted against the twilight by upward-looking predators. But they also face predators with bioluminescent searchlights that should cause the clear animals to flash brightly, just like shining a flashlight across a window pane.

Well, it turns out the midwater crustaceans have camouflage for that too.

A new study from Duke University and the Smithsonian Institution has found that these midwater hyperiid amphipods are covered with anti-reflective coatings on their legs and bodies that can dampen the reflection of light by 250-fold in some cases and prevent it from bouncing back to a hungry lantern fish’s eye.

Weirder still, these coatings appear to be made of living bacteria.

When viewed under an electron microscope, the optical coating appears as a sheet of fairly uniform beads, smaller than the wavelength of light. “This coating of little spheres reduces reflections the same way putting a shag carpet on the walls of a recording studio would soften echoes,” said study leader Laura Bagge, a Ph.D. candidate at Duke working with biologist Sönke Johnsen.

The spheres range from 50 to 300 nanometers in diameter on different species of amphipod, but a sphere of 110 nm would be optimal, resulting in up to a 250-fold reduction in reflectance, Bagge calculated. “But every size of these bumps helps.”

Adding to the impression that the spheres might be bacteria, they are sometimes connected with a net of filaments like a biofilm. Each of the seven amphipod species Bagge looked at appears to have its own species of symbiotic optical bacteria. But that’s not a sure thing yet.

“They have all the features of bacteria, but to be 100 percent sure, we’re going to have to perform an in-depth sequencing project,” Bagge said. That project is already underway.

If the spheres are bacteria, they’re very small ones. But it’s not hard to imagine the natural selection -- having your host spotted and eaten -- that would drive the microbes to an optimal size, said research zoologist Karen Osborn of the Smithsonian National Museum of Natural History, who provided some of the species for this study.

If the optical coating is alive, the researchers will have to figure out how this symbiotic relationship got started in the first place. 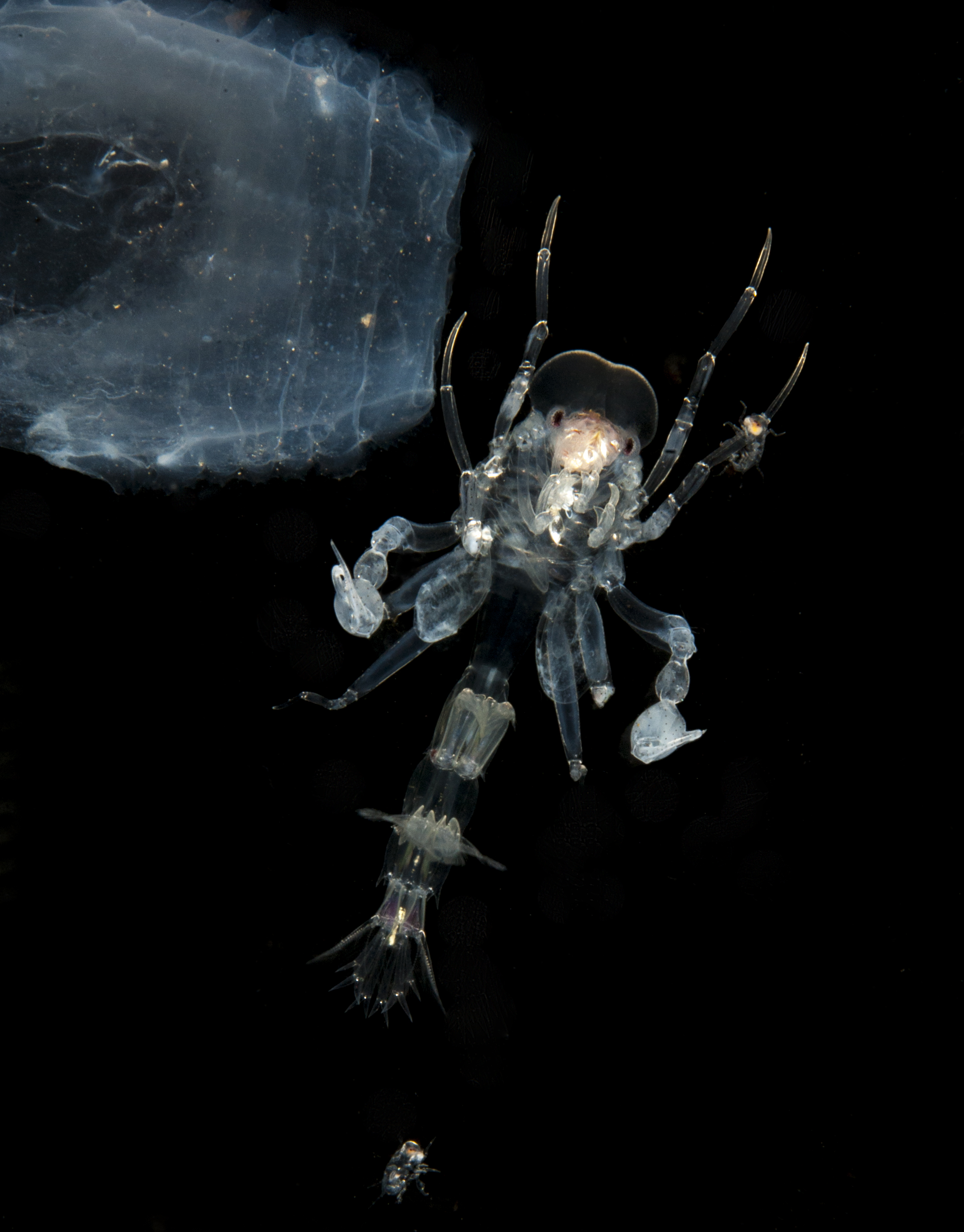 Phronima is a crustacean that lives in the twilight zone of the ocean, where there is nowhere to hide from predators. In addition to being nearly transparent, a new study has found that she and other midwater crustaceans carry an anti-reflective optical coating that may be made of living bacteria. At top left is the hollowed out shell of her prey, the salp, which becomes a floating nest to raise her babies, one of which is below her tail. (Laura Bagge, Duke University)

Crustaceans molt to grow, shedding the old shell and perhaps its attendant anti-reflective bacteria. But Osborn thinks it would be pretty easy to re-seed the animal’s new shell. “In that whole process, they’re touching the old carapace.” There’s also a species of hyperiid, Phronima, that raises its young in a little floating nest hollowed out of the body of a salp. In that case, the kids could adopt mom’s anti-reflective bacteria pretty easily, Osborn said.

Another amphipod species, Cystisoma, also extrudes brush-like structures on the exoskeleton of its legs which are just the right size and shape to serve the same purpose as the antireflective spheres. At up to six inches in length, Cystisoma has a serious need for stealth.

“They’re remarkably transparent,” Osborn said. “Mostly you see them because you don’t see them. When you pull up a trawl bucket packed full of plankton, you see an empty spot – why is nothing there? You reach in and pull out a Cystisoma. It’s a firm cellophane bag, essentially.”

“We care about this for the basic biology,” Bagge said. But the discovery of living anti-reflective coatings may have technological applications as well. Reflection-reducing “nipple arrays” are being used in the design of glass windows and have also been found in the eyes of moths, apparently to help them see better at night.

Support for this research came from the National Science Foundation (OCE-0852138), the Office of Naval Research (N00014-09-1-1053), Sigma Xi, and the Rathbun Crustacean Research Endowment at Smithsonian National Museum of Natural History.