After 700 years, is Giovanni Boccaccio ready to come out of the background?

Most people have never read the 14th century Florentine writer’s most famous work “The Decameron,” but they have read modern authors who did and were inspired by the book -- 100 short, earthy, bawdy, seemingly modern tales of women whose virtue is on trial, rubes who get their comeuppance by falling in latrines and lovers who find their lust thwarted (and in some cases not thwarted).

Literary connections are everywhere. When Keats wrote “Isabella,” he borrowed from Boccaccio’s strange love story of a woman who buries her dead lover’s head in a pot of basil.  Shakespeare readily borrowed themes for several plays. And recent scholarship suggests “The Decameron” is a source for several stories in Geoffrey Chaucer more famous “Canterbury Tales” written decades later.

Romance Studies Professor Martin Eisner, who teaches a course on Boccaccio, says while the writer’s influence is significant, he is traditionally treated as being in the shadow of Dante and his friend Petrarch. “In the famous Giorgio Vasari painting ‘Six Tuscan Poets,’ he’s in the painting, but he’s in the background, barely visible behind Petrarch,” Eisner said. “That’s how he’s traditionally portrayed.”

Putting Boccaccio back into the spotlight is one goal of the third Triennial Conference of the American Boccaccio Association, which will be held Sept. 30-Oct. 2 at Duke. In connection with the conference, Duke’s Rubenstein Library has an exhibit showcasing the library’s vast collections related to Boccaccio’s fiction and scholarly works.

Below, Eisner discusses the legacy of Boccaccio and “The Decameron” and why it still attracts scholarly interest centuries later.

Q: Let’s start with Boccaccio. Who was he?

Eisner: He was a son of a wealthy Florentine banker who wanted his son to be trained as a lawyer.  Boccaccio hated it. In one of the rare autobiographical comments in his books, Boccaccio says he was a “bad businessman, a bad lawyer and not a very good poet.” But then he says “from his mother’s womb he was destined to be a literary man.” And he was.

As a literary man, he had two obsessive concerns. One was to defend the classical Greek and Roman texts, which in the Middle Ages were considered inferior.  He argued that even though the classical texts were pagan, they had deep meaning.  Not only does he read all of these classical stories, he’s one of the first to recover them and bring forgotten stories back to attention. In this way, depending on your historiography, Boccaccio is part of the Renaissance.

His second interest, which might seem contradictory to the first, was to defend the contemporary vernacular language.  Just as the pagan texts had meaning, so did the vernacular Italian language have richness and art.  He wrote scholarly texts in classical Latin, but he wrote “The Decameron” in Italian.

Dante was the model for this.  Boccaccio was an advocate of Dante, and he continued Dante’s project of promoting the vernacular.  But he took it beyond Dante.  People had been writing in poetic vernacular for 150 years: It was accepted as a worthy form of poetry. But Boccaccio wrote in prose vernacular and raised that to an art form.  That was something new and different. 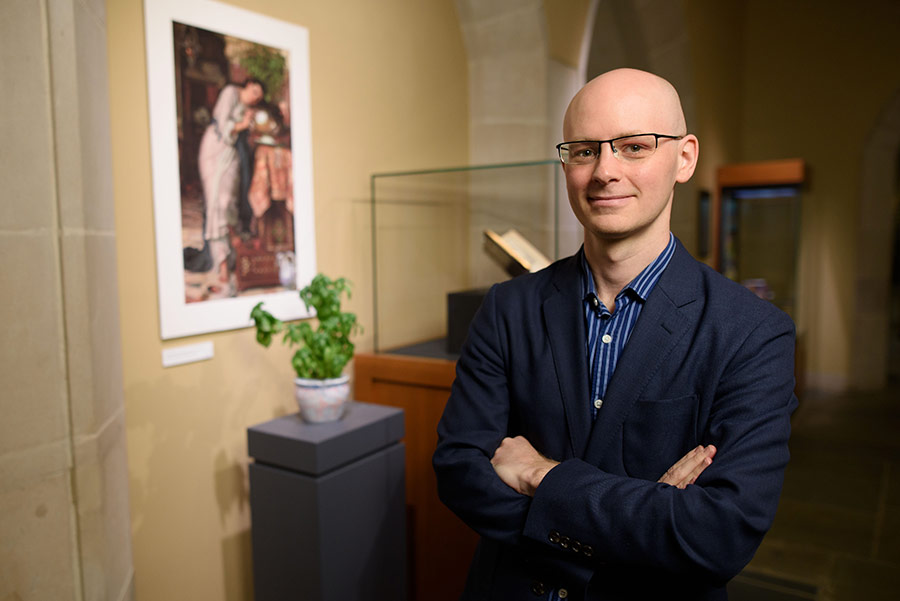 Martin Eisner before a pot of basil at the Boccaccio exhibit in Rubenstein Library. Photo by John Joyner/Duke Photography

Q: Why read the Decameron?

Eisner: Boccaccio’s most famous book is deeply problematic.  It’s not a divine comedy or a potent mythological work. In fact, it’s quite the opposite. It’s filled with many ribald stories. Ten storytellers telling one tale a day across 10 days. These are stories about everyday life and very human feelings: desire, trickery, even lust.

Every year, my students pick up the book for the first time and it surprises them to find there was a text like this in the Middle Ages. They think of the 14th century as a time that’s punishing people, but with “The Decameron” you get something else: a world that actually seems close to our modern world filled with people that are defined by modern cleverness and the same instincts that drive us. It’s a fun read.

We can use these stories to study the historical past and to learn about Boccaccio’s time. We read it to study the emergence of women as storytellers and individual agents, as well as to see the vindication of forgotten classical myths as a past that we should celebrate and not jettison. At the same time, we can read “The Decameron” to celebrate the present through the emergence of prose vernacular.

Q: You mentioned the role of women in “The Decameron.” What’s different about it?

Eisner: Women play important part in “The Decameron,” which surprises modern readers.  Seven of the 10 narrators are women, and many of the stories involve women who are free agents and independent thinkers.  He brings in women’s voices in a new way.

Beyond “The Decameron,” Boccaccio was interested in women’s lives. One of his major Latin scholarly works was a book on “The Lives of Famous Women.” Writing about women’s lives was totally new. His work became a model for later authors to write their own encyclopedias of women.

Q: In 1971 Italian filmmaker Pier Paolo Pasolini made a film version of it that outraged many people, particularly the Catholic Church. Did Pasolini create the outrage or is the material simply that controversial?

Eisner: To a large extent, the movie remains true to the stories in the book, but it underscored the problem of visualizing Boccaccio’s subtle language. One of his bawdiest stories is about a woman discovering men’s desire, and the penis is central to the tale.  Even here, Boccaccio’s language is so sophisticated and rich in metaphor that he suggests different interpretations.  But Pasolini and the artists who illustrated “The Decameron” work in a visual art, and they have to render the story in a more literal way.

Pasolini later disowned the movie and said he overemphasized the dirtiness. But the problem he faced with “The Decameron” was one publishers and illustrators faced throughout the centuries. The Rubenstein Library has a 1905 copy of an English translation and in one story the text suddenly reverts to Italian, with an editor’s note explaining why they felt compelled to leave it untranslated. A 16th century copy in the library simply included asterisks wherever the editors removed parts of the story, and several of the pages are filled with asterisks.

So, the radical nature of text worried people in 16th century. It continued to worry them in 1905. The book was never fully translated into English until the 1970s.

Q: So this week scholars from around the world will come to Duke to discuss Boccaccio. Seven centuries later, what questions are there to ask?

Eisner: There are three big questions. One is what is the relationship between his Latin scholarly work and his vernacular work, such as “The Decameron.”  In addition to writing about lives of famous women, he also developed family trees showing the genealogy of the Greek, Roman and other Gentile gods. This was at a time that nobody was collecting the classic myths.  Before Boccaccio, there was nothing.

The second question is resituating him historically in his relationship with Petrarch. The traditional story minimizes Boccaccio’s importance, but recent scholarship actually suggests the opposite, that he was as big an influence on Petrarch as the reverse.

Finally, the third question is recent studies on the status of women in Boccaccio.  Scholars are paying attention because he’s so interested in thinking about role of gender.