DURHAM, N.C. -- John F. Burness, who led Duke University's communications work for almost two decades and was the guiding force behind the Duke-Durham Neighborhood Partnership, died Monday. He was 77.

Friends and colleagues called Burness a direct, friendly and caring collaborator whose work made Duke and Durham demonstrably better.

“John Burness was one of a kind,” said Nannerl Keohane, one of three Duke presidents for whom Burness worked, and the one with whom he served the longest.

“He was a wise counselor, canny strategist, man of principle, loyal and humorous friend,” Keohane said. “In his responsibility for communicating both the best and the worst of Duke, he presented the facts honestly, earning trust from all constituencies.”

Burness was Duke’s senior vice president for public affairs and government relations for 17 years, guiding the university's interactions with reporters, elected officials, community leaders and others beyond the campus. He was directly responsible for the university's offices of news and communications, community affairs, photography and government relations in Washington, Raleigh and Durham, and served broadly as an adviser to trustees, deans, faculty, student leaders and others.

Burness was instrumental in establishing the Duke-Durham Neighborhood Partnership, a network including 12 neighborhoods near campus and the seven public schools that serve them. Duke raised millions of dollars through the partnership to support youth development and K-12 education, affordable housing, community-based health clinics and nonprofits serving the neighborhoods.

“John loved Duke, and he left us several legacies,” Keohane said. “Most important was his keen awareness of the importance of Durham to Duke, and Duke to Durham. Working effectively with colleagues on campus and in the city, he did a great deal to shape the Duke-Durham partnership and revitalize downtown Durham. He will be sorely missed.”

The partnership also significantly expanded the number of Duke students, faculty and staff engaged in the life of Durham. When Burness retired in 2008, Duke’s Board of Trustees created the John F. Burness Endowment to support the partnership’s programs.

“To the community of Duke and Durham, John was larger than life for all of us,” said Sam Miglarese, who directed the neighborhood partnership for 10 years and remained a close friend to Burness.

“He was a champion of Duke-Durham relations and he will be remembered for his warmth, openness and authentic relationships with all that served the campus,” Miglarese said. “Parking attendants, staff at Duke stores, housing staff, grounds crews all knew and respected him. Everywhere he went he was greeted as someone that appreciated their place at the university and the health system.”

Stelfanie Williams, Duke’s vice president for Durham and community affairs, said Burness guided a defining era of community engagement for the university through his ability to build trust and friendship.

“He was an uncommon leader,” Williams said, “with an exceptional ability to find common ground among many.”

Among his civic duties, Burness was particularly active in K-12 education. He was the founding board chairman of the Durham Communities In Schools dropout prevention program and, in 2001, co-chaired a successful $74 million Durham County bond campaign. He also served on the Durham Public Schools' Quality Council and as a director of the Durham Public Education Network.

Bill Bell, former mayor of Durham, called Burness the kind of friend “you could count on in every aspect.”

“He was a leader in building positive relations between Duke University and the Durham community,” Bell said. “We are very fortunate to have had his leadership and presence, in Durham.”

Burness received the Josephine Clement Award for Exemplary Community Leadership for Public Education in Durham in 2002, and the Samuel DuBois Cook Award in 2004 for his efforts to support racial justice and collaborations between Duke and the Durham community.

“John was incredibly good fun, straightforward and provocative sometimes, and he was real,” said Peter Lange, Duke’s provost during the last eight years of Burness’ tenure.

“John was easy to be friends with,” Lange said. “Even when he was serious, he was always fun to be with, people felt good around him, and he made them feel that way.”

After retiring from Duke, Burness joined the Durham Technical Community College Board of Trustees in 2009, later serving as chair. He also worked on other local leadership boards, including those of MDC Inc.; the United Way of Greater Durham; the North Carolina Museum of Life and Science; Downtown Durham, Inc.; the Greater Durham Chamber of Commerce; and the Research Triangle Regional Partnership.

Widely known in the higher education community, he testified before the U.S. Congress and state legislatures and advised numerous universities and research organizations. His list of leadership positions in education was long, and included the Association of American Universities, the American Council on Education and the National Association of Independent Colleges and Universities.

Burness was also a trustee of Franklin and Marshall College, his alma mater, and served as its interim president for one year while the school conducted a search for a permanent president.

“John’s impact on higher education was only surpassed by his impact on Duke and Durham,” said Chris Simmons, Duke’s interim vice president for public affairs and government relations. “He loved this place, and this city. I, like many, counted him as a friend and mentor.”

Burness taught classes at Duke’s Sanford School of Public Policy, including one on crisis communications and higher education. It was a subject with which he was deeply familiar, serving as Duke’s chief spokesperson during Duke’s lacrosse scandal in the mid-2000s.

“John loved sharing the university’s many stories and guided it skillfully through its inevitable controversies,” said David Jarmul, former associate vice president for news and communications at Duke. “For those of us lucky enough to work with him, he was a mentor and an inspiration — sometimes exhausting, often wise, always caring about others.”

Burness is survived by his wife, Anne Williams; two sons, Evan and Sam, both of whom graduated from Duke; daughters-in-law Katherine and Danielle; and four grandchildren: Calvin, Cameron, Ozzie and Isabella. 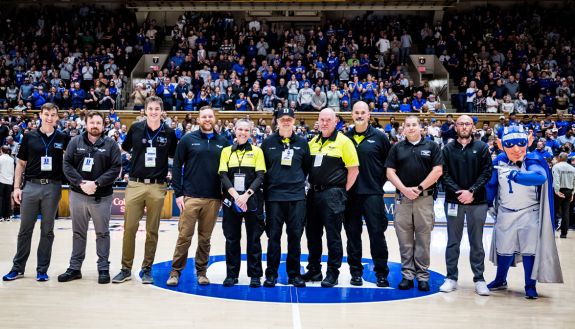 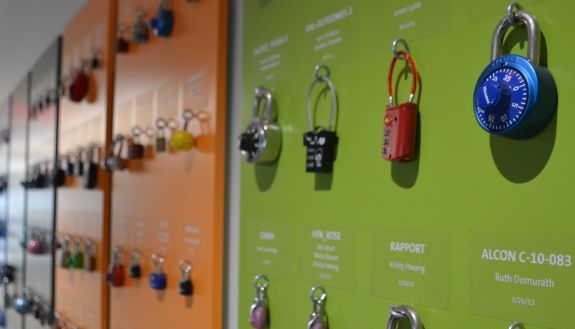 Locks mounted on the wall honor databases compiled by teams at the Duke Clinical Research Institute. Photo by Stephen Schramm.

Forward Together: Locking in Team Culture