Whether it’s a student looking to learn the game of golf, a faculty member trying to shave off a few strokes, or even the greatest basketball player of all time, Ed Ibarguen has cherished the opportunity to coach them.

Since joining the Duke University Golf Club in1988, Ibarguen has guided the operation at the public course, where he’s the general manager and director of golf.   As a Golf Magazine Top 100 Teacher and  a PGA Master Professional, he’s also an in-demand teacher of the game, giving lessons to players at all levels, from junior players to his long-time pupil and friend, Michael Jordan.

Duke employees can get a reduced price on rounds at the award-winning Duke University Golf Club. With the warm weather here, there’s no better time to get out and play.

Already with a long list of professional awards and accolades for his instruction, in October of 2021, Ibarguen earned his most prestigious honor, being named to the PGA of America’s Hall of Fame, a career capstone for golf professionals.

“To be able to teach people and help them enjoy the game that you love, it takes a lot of time and work to develop your expertise, but it’s extremely rewarding,” said Ibarguen, who became a golf pro in 1979.

Much of the work Ibarguen does to help golfers perform better and play their best golf isn’t centered around the mechanics of their swing. While he can certainly help with that, Ibarguen said that focusing on players’ mental approach, and replacing bad habits with good ones, is often the most beneficial way to help golfers see sustainable improvement. 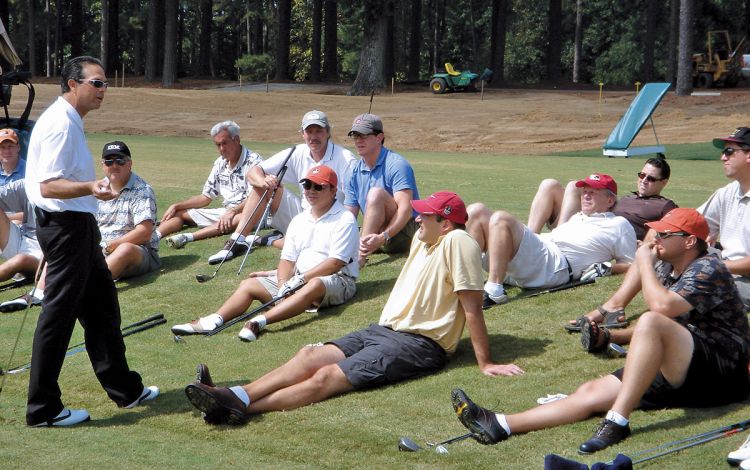 Avid golfers will tell you that lessons learned on the course about concepts such as accountability, resilience and patience reach well beyond the game. So it makes sense that many lessons Ibarguen gives people about how to approach golf hold up when translated to other parts of life.

“I’ve always believed that golf reflects life,” Ibarguen said. “You do things subconsciously, that you’re not aware of, that won’t allow you to succeed. And when you break through these barriers, all of a sudden you start to feel like you’re actually moving in a positive direction.”

With help from Duke’s Hall of Fame golf teacher, here are a few useful lessons that can help you on and off the course.

Each Day is a Chance to Improve 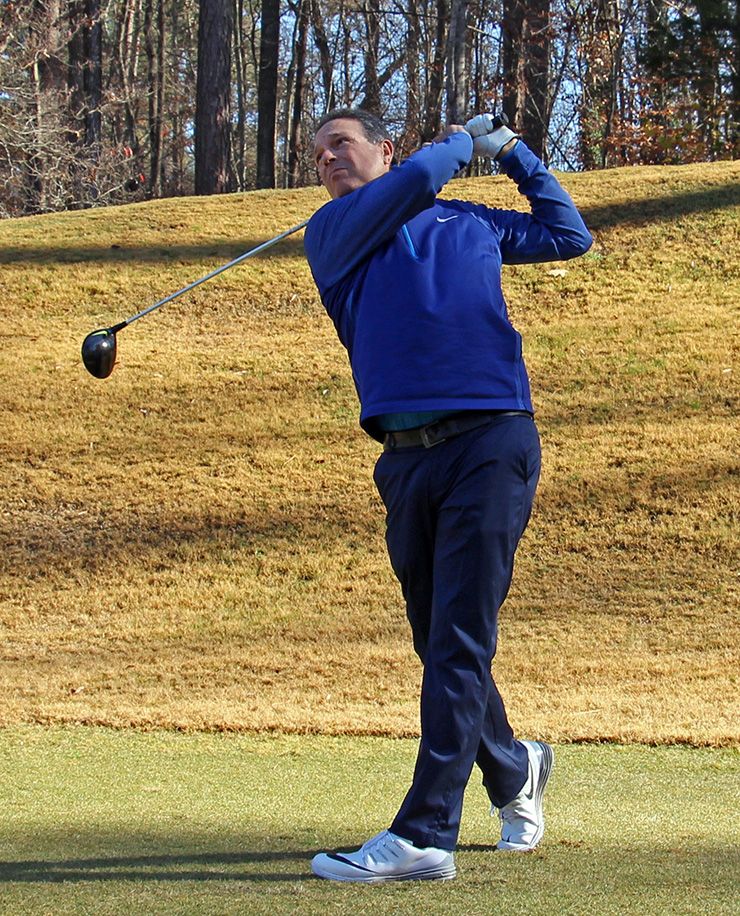 Ibarguen has spent plenty of time around elite athletes wherein he’s noticed that a common thread is that they know how to make the most of the time they put into their craft. Whether they’re grooving their swing on the range, or their shots on the court, they take their work seriously and try to learn from good days and bad days, so when it’s time to compete, their games will be reliably strong.

It’s logical that a directed program of improvement will enhance the opportunity to rise in the moment and perform at a higher level than thought possible.  Ibarguen points out that a more common scenario is that the skills we’ve hone regularly over time prepare us to succeed as opportunities present themselves. That’s why Ibarguen’s motto, which has become the mantra of Duke University Golf Club, is “Getting Better Every Day.”

Whether you’re trying to win a golf tournament, or thrive in your role at Duke, treating each day like an opportunity to develop your skills, even when you feel far from the spotlight, is the best way to make sure that, when an opportunity to shine comes along, you’ll be ready to seize it.

“When you do or achieve something great, it’s usually because you’ve been doing it for a long time and you’ve gotten really darned good at it,” Ibarguen said. “In that sense, you’ve done it so often, that it just happens vs. your trying to make it happen.  ”

Be Your Own Teammate 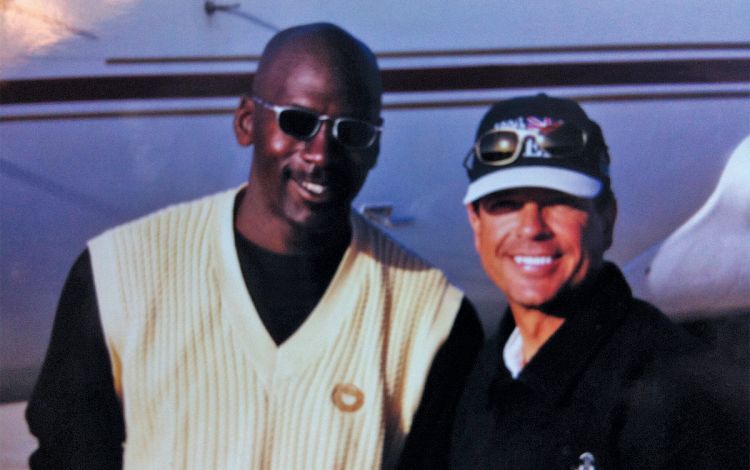 When a golfer hits a bad shot, Ibarguen often asks what they’re saying to themselves, either in their head, under their breath, or occasionally at the top of their lungs.

“They’ll usually be saying awful things to themselves,” Ibarguen said of golfers’ often highly self-critical inner monologues “And I’ll say, ‘Hold on a second. Did you ever play a team sport?’”

Ibarguen will then ask what they’d say to a teammate who just made a mistake. Most golfers will say they’d tell their teammate to shake it off and try to boost their shaken confidence.

“Well, you’re not doing that to yourself,” Ibarguen points out.

In golf and life, it can be easy to get down after a mistake or a hard day. But Ibarguen stresses the importance of paying attention to what we tell ourselves. 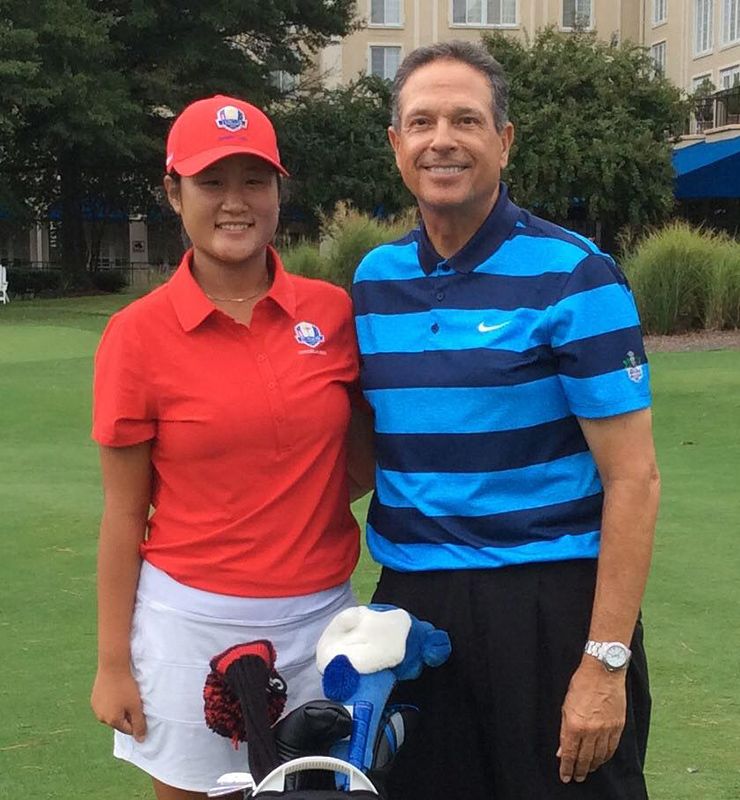 Instead of focusing on how bad a shot was, think about what you can do better next time. Instead of dwelling on a hard day at work, turn your thoughts toward what you can accomplish tomorrow.

Excessive negative self-talk rarely leads to sustainable positive change. Instead, finding a way to turn your inner monologues into the kind of talk that might come from a supportive teammate can help make you be more resilient and able to stay positive even during turbulent moments.

“On the golf course as in life, your attitude is critical,” Ibarguen said. “The most important person you need to support is yourself.”

Focus on the Process 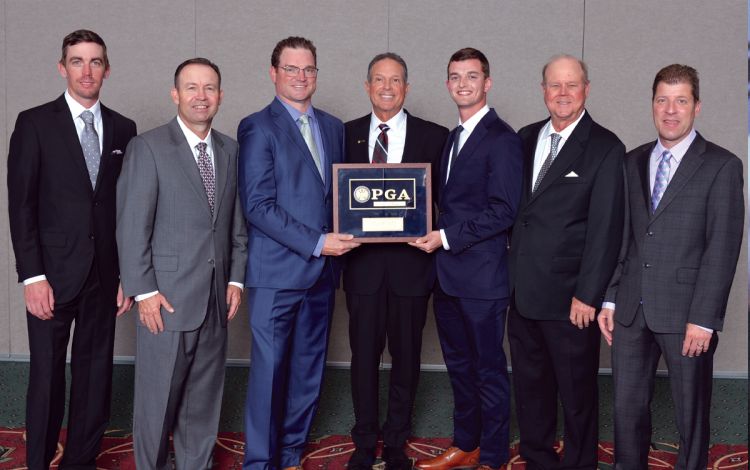 In golf, you’ll often find yourself in messy situations. Perhaps your drive sailed off into the rough, plopped in a bunker or landed behind a tree. Or maybe you’re on the tee and the hole ahead of you seems like it’s seven miles long with trouble everywhere.

In these moments, keeping a cool head and positive outlook are crucial, albeit often difficult. That’s why Ibarguen said it’s important to break daunting situations down into manageable steps and simply focus on the one immediately in front of you. Think about on what needs to happen on the next swing instead of dwelling on the potential for taking a bad score on the hole.

At work, this approach can be applied to big projects, or complicated situations. By simply keeping your eye on the task at hand, you can keep things moving in the right direction and not get overwhelmed.

“In golf, and in life, when you start thinking about the end result more than the process to get there, you’re probably going to stumble,”  Ibarguen said.

Learn more about Ed Ibarguen’s teaching legacy in this video from his PGA Hall of Fame Induction.

Longtime Duke colleagues use time away from work for adventure together