Appointing women to top leadership positions can quite literally change the conversation about female leaders. 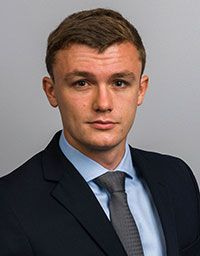 According to research from graduate student M. Asher Lawson of the Fuqua School of Business, when women serve as CEOs or board members at a firm, language at the organization shifts, and women are more likely to be associated with traits such as decisiveness and assertiveness – qualities typically associated with male leaders.

Lawson, who will complete his Ph.D. in management and organizations this summer, collaborated with colleagues at several universities to use machine learning to analyze more than 43,000 corporate documents from organizations, looking at the changes experienced after hiring women into senior leadership positions. Lawson explained the significance of these findings, which were recently published in the Proceedings of the National Academy of Sciences.

The paper, “Hiring women into senior leadership positions is associated with a reduction in gender stereotypes in organizational language,” has been downloaded more than 7,400 times since its publication in February. Upon earning his Ph.D., Lawson will become a decision sciences professor at INSEAD, a global non-profit business school, at its campus in France.

Q: We are seeing female CEOs like GM’s Mary Barra get a lot of public attention as women rise as business leaders. Can we expect to see more major U.S. companies appoint female CEOs in the next decade?

LAWSON: There’s hope that the proportion of women will increase in these positions, but it’s still a relatively rare event. If you look at the demographics of S&P 500 companies, women make up less than 7 percent of CEOs. That’s a glaring statistic, and one that hasn’t changed much in the past 10 years. In 2012, only 4 percent of CEOs at S&P 500 firms were female.

We now see there’s more gender equality in some positions, and we’ve seen lots of progress with the proportion of women on boards of directors. But boards mainly make decisions by committee, whereas CEOs typically have final executive judgment. So, until women are a majority on a board, they still may not have the final say. As far as having women as executive decision-makers, there still seems to be barrier hindering women from occupying those positions.

Q: Decades of research shows people associate positive leadership traits, such as being agentic or competent, with being male. Does your research suggest these stereotypes may be changing?

LAWSON: A primary way by which gender stereotypes are communicated and perpetuated is through language, and that is why we analyzed documents including transcripts of investor calls and annual reports, which are sort of companies’ clearest signal to shareholders.

One key finding we see in the literature is that sometimes, women stepping into positions of power can face backlash. Women often are not described with positive leadership traits and might even be seen as bossy or domineering rather than competent and decisive, as a man would perhaps be perceived in the same position. That is the sort of double-bind women face in these situations.

Our paper offers a rare glimpse of hope, which is that when women leaders are hired, we do see an increased association with positive traits like being competent – but not at the cost of also being associated with communal traits, such as being warm and likeable. This is at least some sign that women leaders are being culturally embraced. Over time, this positive effect may snowball, and people’s associations with women leaders can change.

In our analysis of data about women on boards of directors, we do see companies that experience these changes are more likely to appoint women to their boards in the future.

Q: Some people try to argue that men or women make better leaders. Can the current research answer this question?

LAWSON: The thing is, the effectiveness of women in top leadership positions is effectively untested. Because we know from the glass ceiling phenomenon and ongoing underrepresentation, women aren’t being given access to fair opportunities. So, people like to argue that there isn’t a business case for hiring women as leaders, which there isn’t. There is not yet robust evidence supporting women leaders. But there can’t evidence be until you trust women with this authority.

I’ve been thinking a lot lately about the long-term outcome of this. If you think about being decisive or direct – I’m wondering if that really even is a leadership trait, in a normative sense. Is that something you must be in order to be a good leader? Or it just that leaders traditionally have been decisive men, and we’ve come to associate that term with being a leader? It’s unclear to me.

My hope is, as we increase female and diverse representation in leadership positions, our meaning of what it means to be a leader becomes more diffuse, and being caring can be valued as much as being independent or powerful. Because I don’t necessarily think there’s one way to be a good leader. Instead, I’m excited to see the landscape of what leadership even is keep changing.