When LaShawnda Harris joined Duke in 2008, a supervisor organized a tour of campus buildings where Harris could choose to work.

They made just one stop. Once Harris, a rabid basketball fan, saw Cameron Indoor Stadium, her decision was made.

That began a long relationship as a University Environmental Services team member in the iconic venue. Recently, Harris traded locker rooms for labs, becoming senior supervisor for the science precinct, completing a journey from housekeeper to increased leadership.

“It’s a great story when someone comes from a front-line position and ascends into management,” said Dr. Leslye Kornegay, Duke University Environmental Services Senior Director. “That’s something we like to see.”

Starting at Duke at 23, Harris wasn’t thinking too far in the future. But after befriending people she met at Cameron, and working with supportive supervisors, she saw a path forward.

“I thought I could see myself growing here,” said Harris, whose now-retired father worked for Landscape Services for 33 years and whose mother and sister have since joined the University Environmental Services staff. 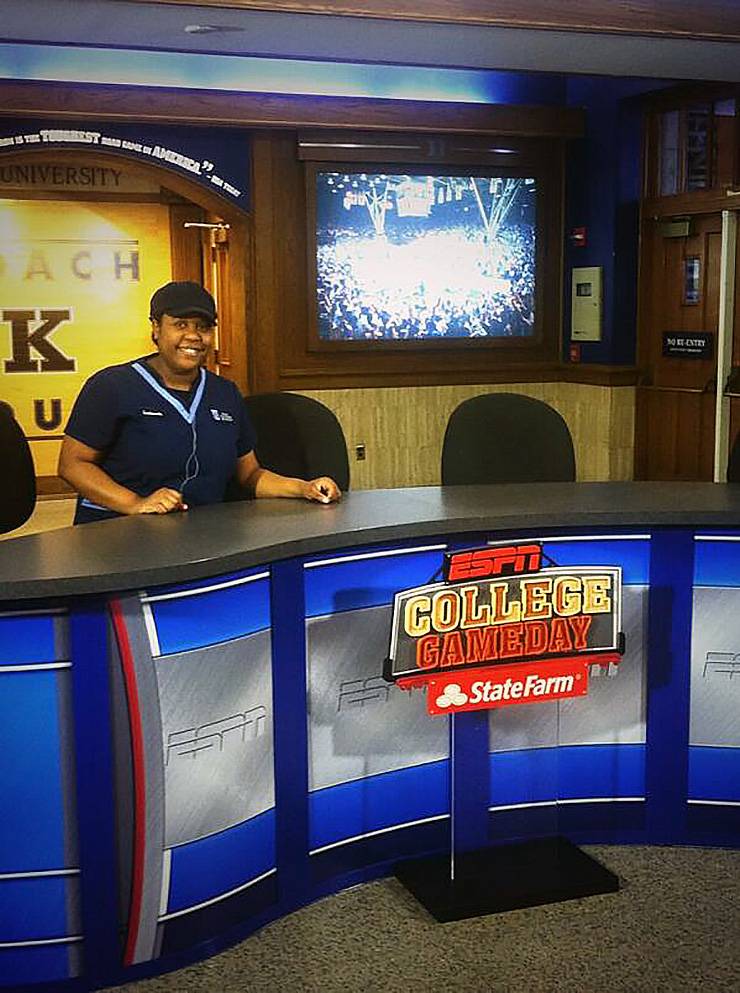 Working in Cameron, Harris witnessed fascinating moments large and small. She regularly experienced electric Blue Devils games with star power on and off the court, as actors, NFL players and former presidents George H.W. Bush and Barack Obama came through to watch.

“I wanted them to have a clean place to work,” Harris said. “They work hard to get better, and I wanted to have that same mentality.”

That drive led Harris to invest in herself. In recent years, she earned an associate degree in business and administration with the help from the Duke Employee Tuition Assistance benefit and is working on her bachelor’s degree.

Her hard work was noticed as, in 2017, she left Cameron to become assistant supervisor for the precinct covering the Bryan Center, Brodhead Center and Student Wellness Center. A year later, when a similar spot opened up for Cameron, Harris returned.

“She’s always been super-friendly and easy to work with,” said Director of Athletics Facilities and Projects Jeremy Anderson. “When there was an opportunity to get her back, we jumped at it.”

In August of this year, Harris was promoted to senior supervisor for the section of campus that includes Gross Hall and the French Family Science Center, where she’ll oversee a staff of around 17.