On the third floor of Gross Hall lies a whimsical island where the landscape and creatures are not what they seem.

The 20-foot-long, 10-foot-wide piece, a mixed-media art installation dubbed “Mathemalchemy,” is the result of a two-year collaboration between Duke mathematician Ingrid Daubechies, Canadian fiber artist Dominique Ehrmann and more than 20 others; devoted to the beauty, fun and creativity of math.

Don’t miss your last chance to visit on Saturday, Dec. 4

On one side of the installation, fanciful sea creatures frolic in an ocean bay -- a nautical scene dubbed the “knotical scene” in honor of the subfield of math known as knot theory.

Denver-based artist Tasha Pruitt shows off a psychedelic sea slug known as a nudibranch that she made out of blue foam, a tuft of cleverly twisted mathematical knots protruding from its back.

“I made a knottybranch,” Pruitt says. 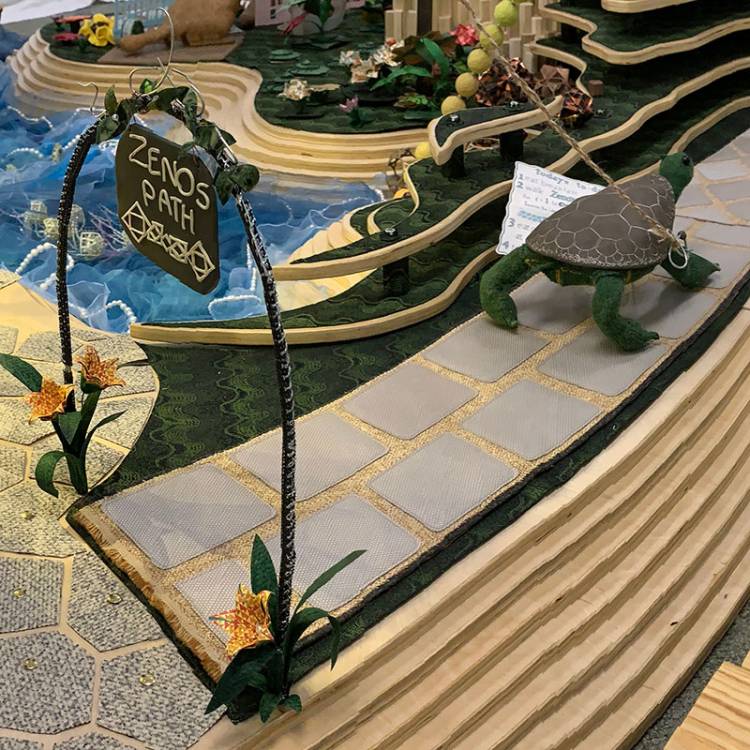 Nearby, a green knitted tortoise sets out for a hike. But to reach her destination, she must get there by taking an infinite number of smaller and smaller steps -- an idea that is the basis of calculus.

Along the way the tortoise encounters mathematical ideas and formations that many have never heard of. To the uninitiated, the kite flying behind her looks like a cross between a pyramid and a block of Swiss cheese. But to mathematicians it’s a Sierpinski tetrahedron, a three-dimensional fractal with patterns that repeat over and over at increasingly smaller scales.

The tortoise’s ceramic shell is a nod to hyperbolic geometry, its surface covered with a honeycomb-like pattern of seven-sided heptagons. Even the mountains and cliffs she is heading towards, built from either vertical columns or horizontal slabs, are meant to illustrate different ways of defining integrals.

Daubechies and Ehrmann first pitched the project and made a call for collaborators at the Joint Mathematics Meetings in Denver in mid-January 2020. Originally, the team had planned to get together in person to build the installation starting in mid-March 2020.

“And of course you know what happened then,” Daubechies said. “The whole U.S. shut down because of the coronavirus crisis, and we had to reorient ourselves.”

Despite the disruptive COVID-19 pandemic they decided to meet anyway, over Zoom. Over the next 15 months, the collaborators would spend some 396 hours in virtual meetings and exchange more than 8,300 emails.

From their separate lockdown locations they painted, sculpted, beaded, embroidered, carved, folded, 3D printed, stitched and welded; using a quarter-scale mockup to test out their ideas and visualize how they might look.

“It really helped us keep going during the pandemic,” Daubechies said.

“We all had a peaceful bubble where we could express and create and be welcomed,” Ehrmann said.

This summer, the fully vaccinated participants -- traveling from Georgia, Colorado, Washington, Arkansas and elsewhere -- met in person for the first time over three weeks at Duke to finalize many of the components and put them all together.

On one day in the final stretch of the assembly, Daubechies and Pratt School of Engineering instructor Elizabeth Paley are putting the finishing touches on the curio shop -- a dollhouse-like building devoted to curious mathematical objects that seem to defy common sense.

“You know we could put a Klein bottle behind that window,” Daubechies says. The object she reaches for is no ordinary bottle, but a twisted glass container with no opening and the neck tucked inside.

Paley, also a Durham-based ceramic artist, ponders the best spot for two objects she created. For one, she has taken a strip of clay, given it a half-twist, and then joined the ends together to form a one-sided object called a Möbius strip, whose discovery in the mid-1800s helped launch a branch of mathematics called topology. The other is donut-like shape called a torus. 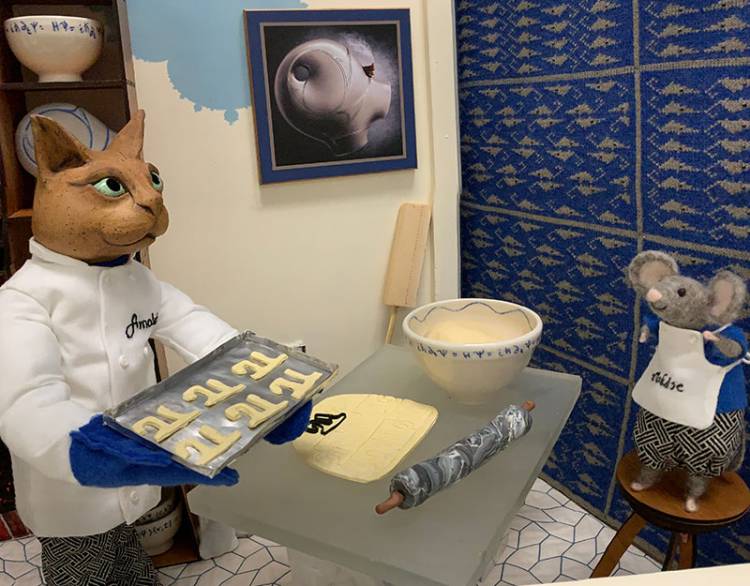 Next door in the bakery, a cat named after Russian mathematician Vladimir Arnold uses a cookie cutter to punch out neat rows of interlocking cookies shaped like the Greek symbol Pi. Divide the circumference of any circle by its diameter and you always get the same thing; this constant whose digits go on forever.

The cookie cutouts fit together perfectly with no leftover dough, like a jigsaw puzzle where every piece is the same shape. Similar tessellations -- repeating shapes that cover an entire surface without any gaps or overlaps -- can be seen in the installation’s wallpapered walls, the tiled floors, the pentagon patterns discovered by amateur mathematician Marjorie Rice and stitched onto one of Ehrmann’s famous quilts.

You don’t need a background in math to appreciate the installation, says Edmund Harriss, a mathematician and artist at the University of Arkansas. Just like you can enjoy a concert without being a musician, “with images and pictures you can reveal some of the beauty that mathematicians see in the ideas without needing to do a PhD,” Harriss says. 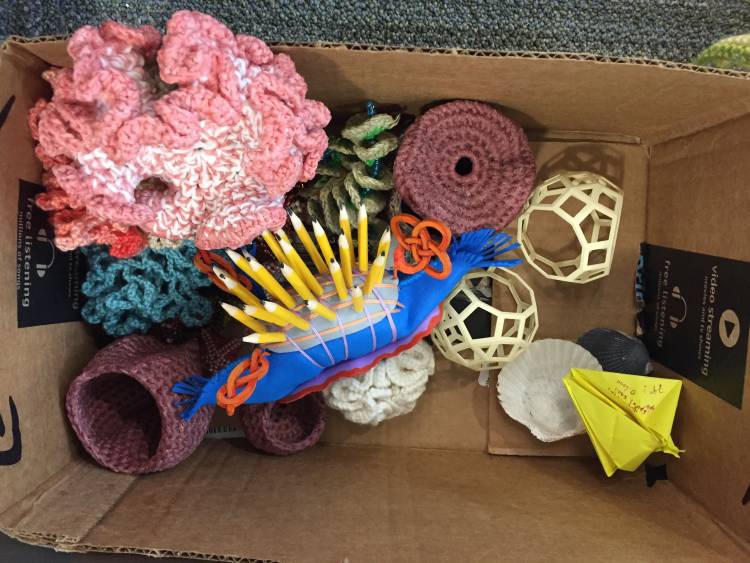 Nearby, a jumble of beaded starfish and origami shells and crocheted corals await their place in the installation. The corals’ frilly edges illustrate a curved surface -- the hyperbolic plane -- that mathematicians spent decades trying to represent with durable physical models until mathematician Daina Taimina realized, in 1997, that she could do it using crochet.

“Is there an exuberant hyperbolic thing we could put in this window?” Daubechies says, peering through the vitrine of the curio shop in the island’s downtown.

She repositions a purple crochet octopus and steps back to take it all in. “I love it,” she says. “It really has come to life.” 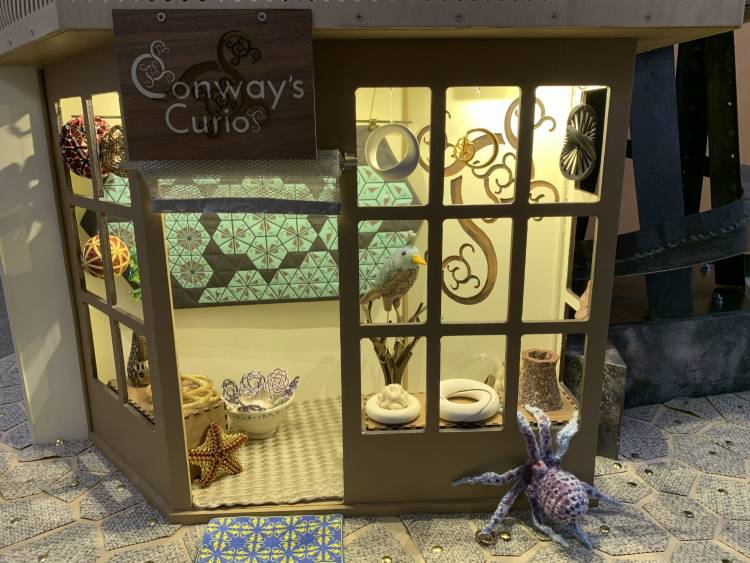 The finished installation will be on display on the third floor of Duke’s Gross Hall (Room 355) through Thanksgiving before moving to its next stop at the National Academy of Sciences in Washington, DC. On Saturday, December 4, there will be a last opportunity for the Duke community to visit the installation up close and personal: an open-door event will last from 1:30-2:30 and the Colloquium Ars Mathemalchemica from 2:30 - 3:30 will feature a sequence of short presentations by several of the Mathemalchemists in Gross 330, followed by Q&A.

Deadline to nominate individuals and teams is Dec. 6, 2021