Duke University has taken another step toward its goal of achieving carbon neutrality by entering into a partnership to receive renewable natural gas beginning in early 2022.

The partnership with South Carolina-based renewable natural gas developer GreenGasUSA will involve vegetable waste that is currently decomposing in lagoons and is emitting gaseous methane directly into the atmosphere.

Working at an existing wastewater treatment facility at a commercial cannery in South Carolina, GreenGas will install equipment to capture the escaping methane from vegetable waste lagoons, process the gas to meet heat content and chemical makeup standards of pipeline natural gas, and inject it into existing interstate pipelines for eventual use in the district energy system that heats East, West and Central campuses in Durham. 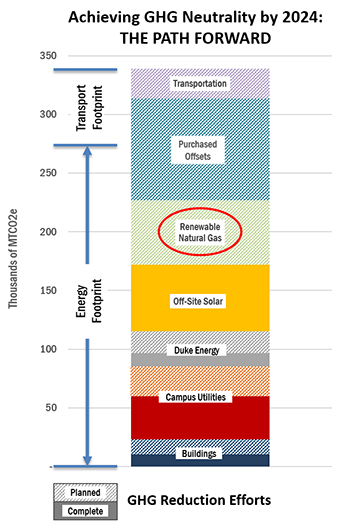 The purchase of renewable natural gas has the additional benefit of a providing a carbon offset for the destruction of methane, a powerful greenhouse gas known to contribute to climate change. Methane traps at least 28 times more heat than carbon dioxide over 100 years after it is released into atmosphere. Over a 20-year timeframe, however, methane is between 84-87 times more powerful at trapping heat, making it a far more dangerous greenhouse gas in the near term.

The GreenGas partnership is the latest part of a broad, multi-year effort by Duke to meet the university’s ambitious goal of carbon neutrality by 2024. That effort seeks to reduce the carbon footprint from all aspects of campus life, including energy use in buildings, campus utilities and university transportation. At the same time, the effort seeks to replace use of fossil fuels with renewable energy sources, including a solar energy partnership announced last year.

“With this partnership, we are taking a smart but real financial and operational risk in order to advance a core university priority for carbon neutrality,” Ennis said. “But we also hope to be a leader in advancing innovation in sustainability practices, and to supporting others who are developing new ideas and technologies in the field.”

The renewable natural gas partnership is one of last big moves available to the university in terms internal carbon reduction investments. This project is projected to result in a 16% reduction in carbon emissions by 2024.

Through implementation of many emission reduction strategies, (see adjoining graph), Duke’s latest estimate suggest that -- relative to the 2007 baseline -- it will achieve a 75% decrease in overall carbon emissions on campus by 2024. The university will continue to invest in high-quality carbon offsets for those emissions that cannot be directly eliminated with a target of reducing contributions to atmospheric greenhouse gases to zero.

Duke’s interest in renewable natural gas has long been a part of the university’s Climate Action Plan in large part because it has the advantage of replacing Duke’s use of fossil fuels with renewable sources at the same time it also eliminates harmful greenhouse gases.

GreenGas has contracted with McCall Farms, a family-owned business established in the 1950s that produces Southern-style canned vegetables. McCall sources nearly 700 million pounds of produce annually from farmers in the region, of which approximately 105 million pounds come from North Carolina farmers.

Duke will buy a portion of the project’s output and begin receiving 95,000 million BTUs of fuel per year, displacing approximately 6% of the natural gas used for district heating of the main Durham campus. The combined effect of the fuel displacement and the capture and destruction of methane from the McCall wastewater treatment site will be sufficient to completely neutralize the climate impact of the university’s remaining natural gas use.

“The McCall project is an ideal match for Duke’s highly ambitious and innovative approach to carbon neutrality,” said Tanja Vujic, who developed Duke’s renewable natural gas strategy. “It will provide high quality, carbon-negative renewable natural gas from an emerging and innovative project type, yield local environmental, community and economic benefits, cultivate a partnership with good environmental stewards, and be economical for Duke. It also means that Duke will have the renewable energy and GHG reductions it needs to bring Duke’s energy-related greenhouse gas emissions to zero well in time for the 2024 target neutrality date.”

“Duke’s commitment toward improving the environment and taking proactive steps to reduce carbon emissions are exemplary,” said GreenGasUSA’s founder Marc Fetten. “This project sets a new standard for accurately accounting carbon emissions. We are proud to have met these standards and grateful for Duke’s disciplined approach that establishes our industry-leading practices. This allows GreenGasUSA to implement a highly impactful carbon mitigation project that will benefit farming communities.”

In addition to monthly permits, daily and multi-day permits are available