DURHAM, N.C. -- When marine biologist Eleanor Caves of the University of Exeter thinks back to her first scuba dives, one of the first things she recalls noticing is that colors seem off underwater. The vivid reds, oranges, purples and yellows she was used to seeing in the sunlit waters near the surface look increasingly dim and drab with depth, and before long the whole ocean loses most of its rainbow leaving nothing but shades of blue.

“The thing that always got me about diving was what happens to people's faces and lips,” said her former Ph.D. adviser Sönke Johnsen, a biology professor at Duke University. “Everybody has a ghastly sallow complexion.”

Which got the researchers to thinking: In the last half-century, some fish have been shifting into deeper waters, and climate change is likely to blame. One study found that fish species off the northeastern coast of the United States descended more than one meter per year between 1968 and 2007, in response to a warming of only about one degree Celsius.

Could such shifts make the color cues fish rely on for survival harder to see?

Previous research suggests it might. Scientists already have evidence that fish have a harder time discerning differences in each other’s hues and brightness in waters made murkier by other causes, such as erosion or nutrient runoff.

As an example, the authors cite studies of three-spined sticklebacks that breed in the shallow coastal waters of the Baltic Sea, where females choose among males -- who care for the eggs -- based on the redness of their throats and bellies. But algal blooms can create cloudy conditions that make it harder to see, which tricks females into mating with less fit males whose hatchlings don’t make it.

The turbidity makes it harder for a male to prove he’s a worthy mate by interfering with females’ ability to distinguish subtle gradations of red or orange, Johnsen said. “For any poor fish that has beautiful red coloration on his body, now it’s like, ‘well, you're just going to have to take my word for it.’”

Other studies have shown that, for cichlid fish in Africa’s Lake Victoria, where species rely on their distinctive colors to recognize their own kind, pollution can reduce water clarity to a point where they lose the ability to tell each other apart and start mating every which way.

The researchers say the same communication breakdown plaguing fish in turbid waters is likely happening to species that are being pushed to greater depths. And interactions with would-be mates aren’t the only situations that could be prone to confusion. Difficulty distinguishing colors could also make it harder for fish to locate prey, recognize rivals, or warn potential predators that they are dangerous to eat.

In a study published April 21 in the journal Proceedings of the Royal Society B, Caves and Johnsen used mathematical models to determine what the colors of the underwater world might look like as fish in the uppermost layer of the ocean shift to new depths. 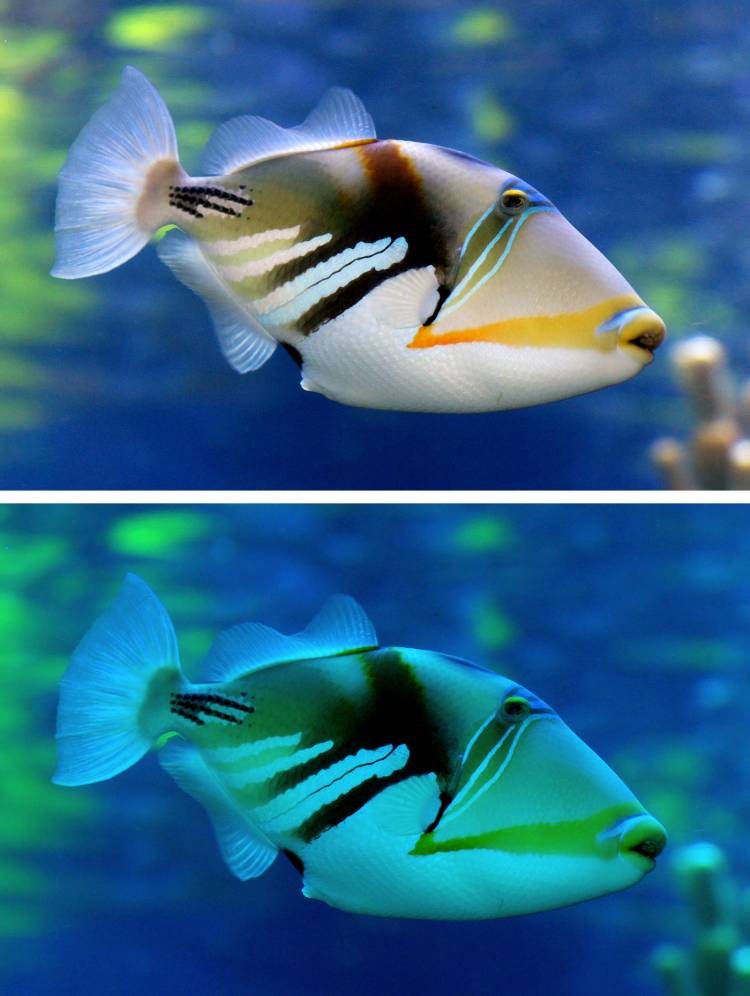 They were able to show that, while the surface waters may be bursting with color, descending by just 30 meters shrinks the palette considerably.

“It's like going back to the days of black and white TV,” Johnsen said.

When sunlight hits an object, some wavelengths are absorbed and others bounce off. It’s the wavelengths that are reflected back that make a red fish look red, or a blue fish blue. But a fish sporting certain colors at the surface will start to look different as it swims deeper because the water filters out or absorbs some wavelengths sooner than others.

The researchers were surprised to find that, especially for shallow-water species such as those that live in and around coral reefs, it doesn’t take much of a downward shift to have a dramatic effect on how colors appear.

“You really don't have to go very far from the surface to notice a big impact,” said Caves, who will be starting as an assistant professor at the University of California, Santa Barbara, this fall.

Precisely which colors lose their luster first, and how quickly that happens as you go down, depends on what depths a species typically inhabits and how much deeper they are forced to go, as well as the type of environment they live in -- whether it’s, say, the shallow bays or rocky shores of the Atlantic, or a tropical coral reef.

In clear ocean water, red is the first color to dull and disappear. “That’s important because so many species use red signals to attract mates or deter enemies,” Johnsen said.

The team predicts that some species will be more vulnerable than others. Take, for instance, fish that can’t take the edge off the heat by relocating toward the poles of the planet. Particularly in semi-enclosed waters such as the Mediterranean and Black seas or the Gulf of Mexico, or in coral reefs, which are stuck to the sea bed -- these species will have no option but to dive deeper to keep their cool, Caves said.

As a next step, they hope to test their ideas in the coral reefs around the island of Guam, where butterflyfishes and fire gobies use their vivid color patterns to recognize members of their own species and woo mates.

“The problem is only accelerating,” Caves said. By the end of this century, it’s possible that sea surface temperatures will have heated up another 4.8 degrees Celsius, or an increase of 8.6 degrees Fahrenheit, compared to the 1896-2005 average.

And while warming is happening faster at the poles, “tropical waters are feeling the effects too,” Caves said.

This research was supported by the European Union's Horizon 2020 research and innovation program under the Marie Sklodowska-Curie grant agreement (No 793454). 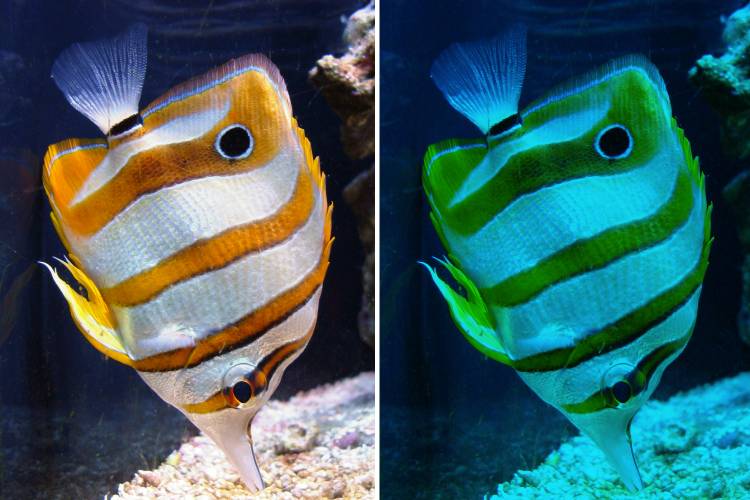