In the spring of 2018, Duke undergrads Shivani Shah and Kushal Kadakia piled into Shah’s Toyota Camry and drove five hours west to Graham County to do some research that continues to pay dividends today.

Graham is a county of roughly 9,000 residents about 100 miles west of Asheville, tucked into the Nantahala National Forest near the Tennessee border. Shah and Kadakia went there as part of a Bass Connections project on Medicaid reform; they wanted to know why this small, rural county spent so much on health care and yet reported such poor outcomes.

The duo probably could have gotten some version of the truth through classroom lectures and readings and maybe a close examination of healthcare data.

Instead, they sat down with the local directors of the health department and the emergency management service. They learned directly that this small county struggled to provide health care to people difficult to reach; that some residents didn’t trust one particular doctor at a local health clinic; and that citizens often called an ambulance for basic medical services.

“They were treating their EMS like Uber because they didn’t have access to any primary care nearby,” Kadakia recalled recently. “It was easier to call EMS to drive them to a local emergency room as opposed to being able to see a doctor nearby.” 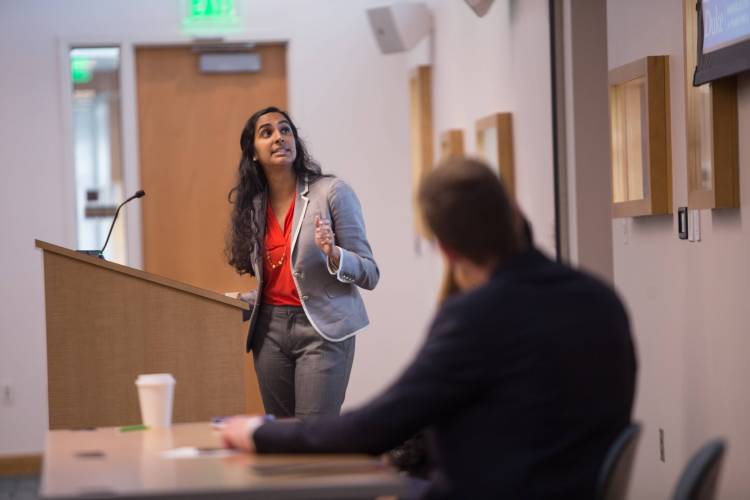 They eventually reported their research in a published journal article and a presentation at a major conference, and now, years later, they’re still referencing the research in professional health care settings.

Shah and Kadakia are now Duke graduates pursuing graduate degrees elsewhere with an eye to careers in medicine and health policy – aspirations they say were prompted in large part by the Bass Connections experience.

‘A Better Level of Detail’

The lasting benefit of that weekend trip illustrates Duke’s embrace of interdisciplinary learning, strong mentoring relationships, and belief that an academic journey doesn’t have to end when a class or project concludes.

Shah and Kadakia were members of a Bass Connections team formed in 2016 to assess Medicaid reform in North Carolina. The group was comprised of roughly 15 undergraduate and graduate students mentored by two faculty members, Barak Richman, a health policy expert with the Duke Law School, and Don Taylor, a health policy scholar with Duke’s Sanford School of Public Policy. The project was organized by the Duke-Margolis Center for Health Policy.

The goal was to propose improvements to North Carolina’s Medicaid program, and after a year of work, the group did craft a document strong enough to be reviewed in Raleigh by state officials who work in health care and public policy.

The subsequent work Shah and Kadakia did in Graham County (they did research as well in Tyrell County, which had similar health outcomes) was spun from a Bass research grant at the conclusion of the Medicaid team’s work. It kept the pair busy until graduation and beyond; the pair worked with Richman, the law professor, to author two articles that published in 2019.

A native of Rockingham County, NC, Shah said the real-world experience she gleaned from the Bass project and the opportunity to publish her work and present at a conference was far beyond her expectations.

“I can’t say I expected this when I applied to Bass Connections, but it’s certainly had a tremendous impact on my life both personally and academically,” said Shah, now a third-year MD/MBA student at Harvard Medical School and Harvard Business School. “I hadn’t imagined the scale of the work I’d be able to do.”

The work bolstered the education she received in the classroom as a student in the Sanford School of Public Policy, Shah said.

“It makes you appreciate what you learned in the classroom even more because it makes you apply it,” she said. “And you learn everything at a better level of detail. My understanding of health policy definitely got better because of this project.”

Kadakia is currently a Rhodes Scholar at the University of Oxford in England, where he’s studying epidemiology and US history. He will attend Harvard Medical School as well this fall and plans to become a doctor with a holistic understanding of the health care system.

His work on the Bass projects helped spark that interest, he said. In a blog post and journal article he, Shah and Richman published from the research in Graham and Tyrell counties, the group in part argued for an expansion of telehealth and infrastructure resources in rural counties as well as a broadening of health care services to leverage the skills of pharmacists, nurses and other health care providers in areas where few doctors are working.

Their work was published in Health Affairs, a widely read health policy outlet, and the Annals of Health Law and Life Sciences, an influential journal.

“Your work gets read by the right people if you work on the right questions,” Kadakia said. “If you ground your work in real people with real questions, it’s worth it to put in those hours.”

Shah would later discuss the findings at the Beasley Health Law Symposium at the Loyola School of Law in Chicago, a rare student to present findings at a professional academic meeting.

“She went to the conference with a bunch of academics and presented it in the lion’s den, so to speak,” said Richman, the law professor. “That’s nothing I did as an undergraduate, that’s for sure. I think that’s pretty extraordinary.”

Since 1987, Kate Hendricks has provided wise counsel for growing institution