For Kaitlin and Christopher Briggs, the excitement over expecting their first child came with a nagging worry: how to maximize time off work to be with the baby.

The couple, both Duke employees, did the math with their accumulated time off in anticipation of the November due date. Neither Kaitlin nor Christopher planned to take a personal day, but when Duke announced an expansion to the Parental Leave policy last summer, everything changed.

Duke will provide up to six consecutive weeks of 100 percent paid parental leave to eligible employees.

“Kaitlin and I just started yelling, ‘Did you see? Oh my God!’ when we found out,” said Christopher, senior assistant director of Undergraduate Admissions. “We felt so lucky in that moment.”

The expansion doubled the paid time off for Duke staff from three weeks to six weeks for the birth or adoption of a child, allowing Kaitlin and Christopher to each take two days off in July for a long weekend of rest before the birth.

“You feel emotionally drained from all the stress and excitement of being pregnant,” said Kaitlin, senior program director of the Office of Special Events and University Ceremonies, who gave birth to Julian Howell Briggs on Nov. 2, 2020, at Duke Regional Hospital. “The new policy gave me a chance to recharge before becoming a parent.”

In addition to doubling paid time off, the expanded benefit eliminates a three-week waiting period and eligibility requirement for the parent to be designated as the primary caregiver. Now, if both parents work at Duke, as is the case with the Briggs, the policy allows both parents to qualify. Previously, one parent could apply for the benefit.

For faculty, the length of paid leave remains the same, however the requirement that a parent be designated as primary caregiver to use the benefit is lifted. And, if both parents work at Duke, both can take advantage of the benefit. 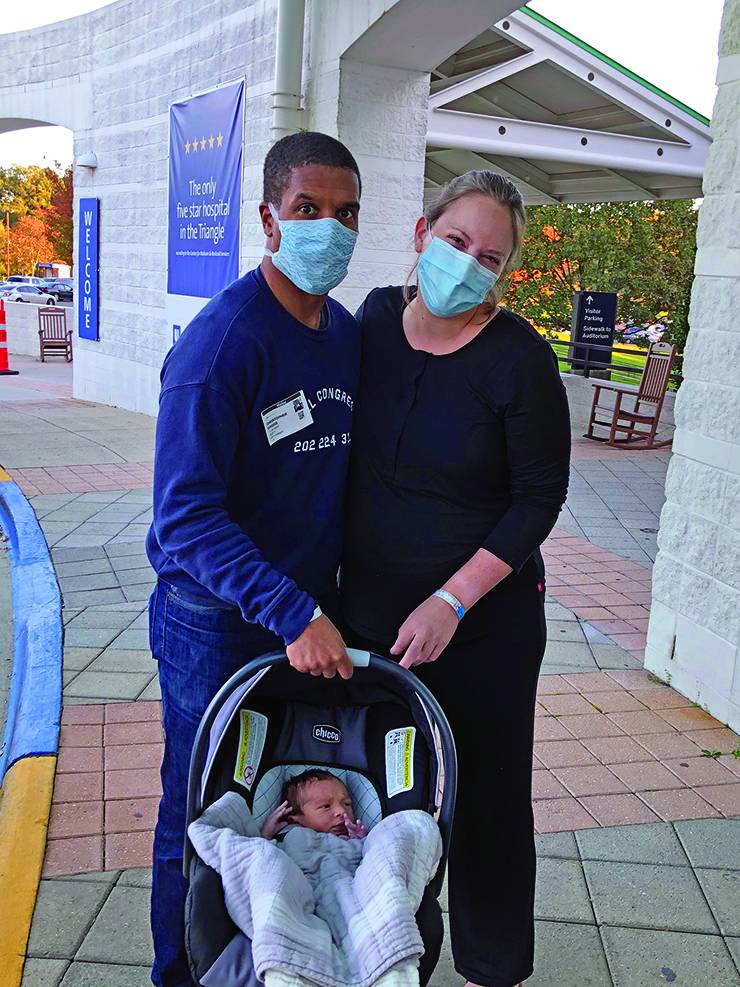 Expanding the benefit supports the well-being of working parents who are adjusting to caring for a newborn or adopted child.

“I’ve learned through my own parental experience how important that initial time is for both the parents and children after a child is born,” said Kyle Cavanaugh, Duke’s vice president for Administration. “I’m thrilled with the improvements that we’ve made to support parents.”

With the expansion, Kaitlin reduced the vacation and sick days she planned to use. And Christopher took an additional six weeks off, giving him time to help Kaitlin recover and get to know Julian.

“My mind isn’t split between trying to work, be a good dad and a supportive husband,” Christopher said. “I can focus on helping Kaitlin and our kid. The new policy is definitely a family-first benefit.”

Send your ideas, shout-outs and photographs through our story idea form or write working@duke.edu.