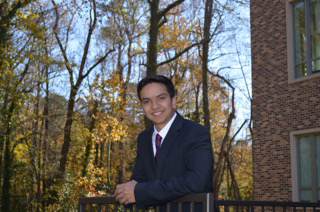 Bigyan Babu Regmi, a senior from Gorkha, Nepal, is one of 119 students from around the world who have been awarded a prestigious fellowship to study at the Yenching Academy of Peking University.

This initiative brings together young people who have demonstrated a talent for leadership and innovation for an interdisciplinary master’s program.

Yenching Scholars are awarded a full scholarship to study for a year at Peking University. Additionally, there is the option to extend the scholarship for a second year should scholars plan to remain in Beijing.

The Yenching Academy of Peking University was established in 2014 with the goal of pushing academic study of China beyond the boundaries of traditionally defined humanities and social sciences disciplines through a specially designed, English-taught master’s program.

Through coursework, independent research and field studies, Yenching Scholars examine China’s past, present and future, with particular emphasis on China’s development and role in the world.

Regmi, an economics major at Duke, plans to pursue a master’s degree in China studies with a focus on economics and to explore Sino-Nepal relations through the lens of politics and international development.

A member of the selective University Scholars program, which fully funds his education at Duke, Regmi has led the TedXDuke group that organizes the annual TEDX conference at the university.

During his time at Duke, Regmi also co-founded an organization in Uganda to provide vocational training to unemployed women and moderated a global goals conference in Kuala Lumpur, Malaysia. Regmi aspires to pursue policymaking and help his home country of Nepal during its time of rapid socioeconomic development.

Get Smarter Online with the Virtual Security Academy

Staff and faculty are invited to cybersecurity sessions through April 2022