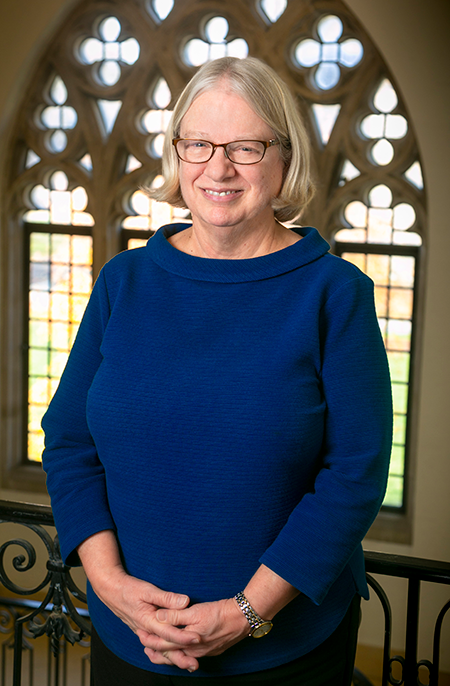 Early in her Duke career, Lisa Jordan worked as a psychiatry department office assistant whose many tasks included keeping track of a VCR that professors borrowed to use in class.

This was 1979 and the boxy gizmo was kept on a rolling cart in a conference room. One of its frequent users was Keith Brodie, the department chair.

Each time Brodie would borrow the VCR, he’d strike up a conversation with Jordan, and the two got along well. When a staff member in Brodie’s office left, he reached out to Jordan to see if she was interested in the job.

Thus began Jordan’s ascent to the president’s suite. When Brodie became chancellor under President Terry Sanford in 1982, he brought her with him to the Allen Building. Brodie became Duke’s president in 1985, and a year later named Jordan his executive assistant. He would be the first of four Duke presidents Jordan would serve in a Duke career that will total 41 years when she retires next June.

Jordan has worked with Brodie, Nannerl Keohane, Richard Brodhead and current President Vince Price, offering counsel, protection, support and advice to four leaders who share many characteristics, she says, including the desire to bend time to their will.

While much has changed since she took on the role in 1986, the primary task -- supporting busy presidents by prioritizing and delegating -- hasn’t changed.

“[Lisa] is so much more than a supporting player -- she is a friend and confidante, a counselor, an historian of the university, and a keeper of its traditions.”
-- Vincent Price

“For the past three decades, Lisa has been instrumental to the success of the President’s Office -- and, by extension, the university,” says Price, who became Duke president in 2017. “She offers support on all of the many requests that come across my desk, and no initiative is launched, no letter responded to, no meeting scheduled or trip taken without her oversight.

“At the same time, she is so much more than a supporting player -- she is a friend and confidante, a counselor, an historian of the university, and a keeper of its traditions. As the fourth Duke president to benefit from Lisa’s extraordinary assistance, I can’t overstate how deeply she will be missed.”

Jordan grew up in Richfield, just east of Charlotte. She graduated from UNC-Chapel Hill in 1977 with a degree in psychology. She had the odd job or two after college before settling in at Duke in 1979, at first with an entry-level secretarial job in a psychiatry office in Duke South. As she worked her way from one assistant role to the next, she was mentored by more senior women. They taught her myriad skills she’d employ for four decades -- like the importance of reading the boss’s mood and the value of careful proofreading.

“You don’t send out a letter from the president with an error in it,” she says. “That’s a no-no.”

Technology changed the most over the course of her career, she says now. When she joined Brodie’s team in the psychiatry department, she had to learn to use an IBM ‘memory’ typewriter that required you to type a sentence, check it on a small screen, and then push a button for it to actually print the sentence onto the page.

The Keohane era at Duke stretched from 1993 to 2004, a time of sweeping change in the workplace thanks to the adoption and now ubiquitous use of email. Jordan quickly realized the pace of work would never again slow thanks to the immediacy of this new communication medium.

Today, social media quickens the pace even more. Among Jordan’s duties these days is to triage the president’s office email account, which on some days can require its own full-time monitor.

From her second floor perch in the Allen Building, Jordan is the face of the president’s office, steering people to and fro, juggling her boss’s time in every overstuffed day.

Jordan’s many friends and admiring colleagues say she handles all this human traffic with a smile, kind words and even manner.

“She’s a total air traffic controller. She keeps track of what’s coming in, what’s taking off, what needs to be waved off,” says Chris Simmons, Duke’s associate vice president for government relations. “She keeps precise time. Geographically, it’s highly visible. You can’t walk through the Allen Building second floor without seeing her, or knowing she sees you.”

Says Brodhead, Duke’s president from 2004 to 2017: “Lisa is the calmest person in the world even in the middle of a storm. It’s very helpful. When everyone is getting excited, one look at Lisa and everyone remembers to calm down.”

As president, Brodhead conducted annual performance reviews for 14 employees. For each, he blocked an hour of time.

“Lisa’s generally took about four minutes,” he says. “I’d say ‘Your work was perfect.’ And that was it. What was I going to do? Think of synonyms for ‘perfect?’“ 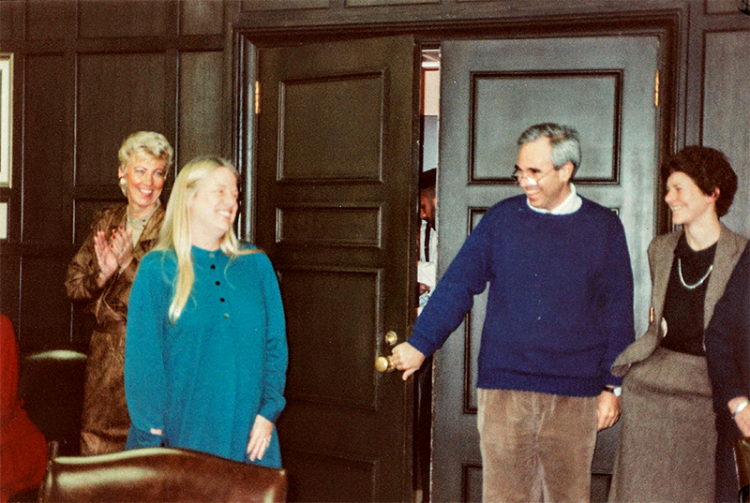 Though she’s a UNC graduate, Jordan is a Duke fan. This is notable, since UNC alums don’t just snap their fingers and root easily for Duke. Truth be told, Jordan was a Carolina blue trash-talker in her early years at Duke, toting newspaper pages to work on days following Tar Heel victories over the Blue Devils to rub in the faces of co-workers.

But then one year her son, Luke, went to Duke basketball camp and Jordan sat on the sidelines and watched Coach Mike Krzyzewski offer wisdom and support to the kids.

“Luke just loved Duke,” Jordan recalls. “So I started thinking that it’s pretty fun to be a Duke fan.” Her conversion was bumpy at times. One day while waiting in a car line to pick up Luke from school, a fellow Tar Heel alum flagged her down, taking her to task for the Duke license plate on her car.

“He was really mad about it,” she says with a chuckle. “I’m a big Duke fan now and I hardly pull for Carolina at all.”

When Duke’s men’s basketball team won the national championship in 2015 and was invited to the White House for a tour and a meet-and-greet with then-President Obama, Brodhead invited Jordan to attend with the team and a small group of Duke administrators.

“She is a totally selfless person,” Brodhead recounts. “She would have never in a million years said ‘How about I go on that trip?’ “

The trip included a visit and tour of the National Archives as well.

“I was just stunned,” Jordan says. “That was so much fun. I’ll remember that all my life.”

Jordan’s retirement can be traced to the bum hip she had replaced last year. The surgery kept her home for six weeks, a stretch of time that forced her to slow down. She read, caught up on movies and got to know her neighbors better. She realized she could get used to not working.

“That helped me decide to retire,” she says. “When I was at home for those six weeks I didn’t miss work at all. It was fabulous. I could stay up late watching a movie and not worry about getting up early the next day.”

Jordan says she’ll miss people most of all when she leaves the Allen Building next year -- all the friendships she’s made over these many years. Her future plans are both global and local. She already has a European river cruise booked for next fall, and she wants to get involved as well with some community groups in Hillsborough, where she lives.

And now she gets to manage only her own schedule, which will include not setting her alarm clock every night.

“I’m looking forward to living at a slower pace.”

Why Our Media Silos Are Promoting Political Polarization