A two-day forum on immigration this week sought to put a face on a topic often overshadowed by policy debates and partisan hate-speech.

“I want to recognize clearly here that immigration is not some abstract topic or principle,” said Provost Sally Kornbluth in her opening remarks Thursday at the annual Provost’s Forum, “Immigration in a Divided World.”

Full video coverage of the panels are now available for viewing:

“I know that many of our students, faculty and staff experience this issue on a very personal level -- either for themselves or their families and friends,” she said.

“Immigration policy and practice has a very real impact on their lives and futures. And by discussing it at an intellectual, conceptual level, while we want to understand all aspects of the issues and options, at the same time, we do not want to lose sight of the real consequences of the topics we’ll be discussing on the individual lives of our friends and colleagues.”

“We don’t pretend to have exhausted the topic (through this forum), instead we have a more modest goal, which is just to frame the ways in which this conversation might be had in more and better and different and productive ways on this campus going forward,” said Noah Pickus, associate provost and senior adviser.

In the keynote address Thursday, New York Times columnist and author Nicholas Kristof spoke on the topic, “Immigration as a Test of Our Values.”

He compared U.S. practices on the Southern border, specifically putting people in cages and separating families, to the internment of Japanese-Americans during World War II and America’s refusal to accept Jewish refugees fleeing the Nazis.

“One lessons of that (history), I think, is that when people stoke fears today about caravans, about threats to American well-being and security, that we bear a special historical responsibility to look very, very closely at those claims,”
-- Nicholas Kristof

Kristof added that universities have a “special capacity and obligation to provide that kind of scrutiny and bring some extra balance to those deceptions (and provide) empathy toward those seeking to find a respite.” 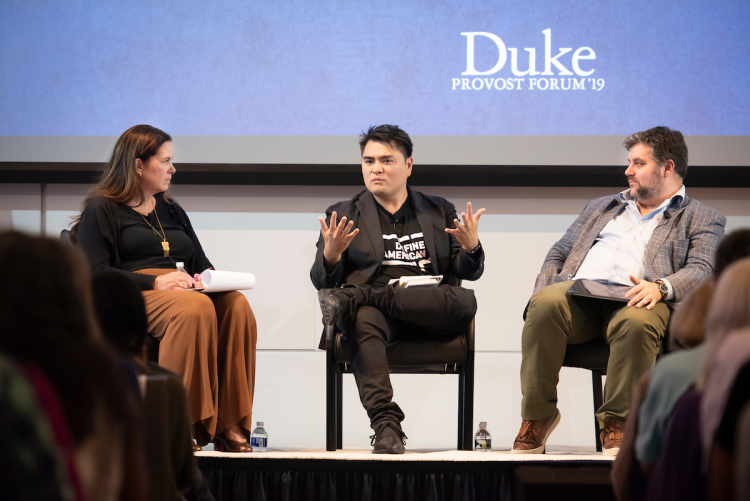 Wednesday’s session included discussion of home, belonging and their importance when thinking about immigration.

“The harder questions are, 'How do you belong?' and 'What are you a part of?'" said Pulitzer Prize-winning author Jose Antonio Vargas.

A Q&A during that session touched on the harm of placing people’s identity in racial or ethnic categories.

"I worry about a legal system that shepherds us into these categories, how it's going to shape our future country,” said Michael Brendan Dougherty, a senior writer at National Review.

“My nationalist proposal is to bring about convergence where someone who is obviously culturally -- and by living experience -- an American, gets documents and becomes an American and shares equal rights."

Suzanne Shanahan, Nannerl O. Keohane Director of the Kenan Institute for Ethics, said: "One of the realizations I had in this conversation about the intransigence of the politics of all of this is we do not in fact share an identity. The question of who we chose to come and who gets to stay -- we don't have a common set of values that drives that."

For universities, immigration is not just a controversial topic to study and discuss. It is one of the important reasons why American higher education is the envy of the world, said Charles Clotfelter, Z. Smith Reynolds Professor of Public Policy.

But dependency on immigration also leaves higher education vulnerable to abrupt changes in immigration policy, said Clotfelter and other panelists at the forum’s Thursday afternoon session. 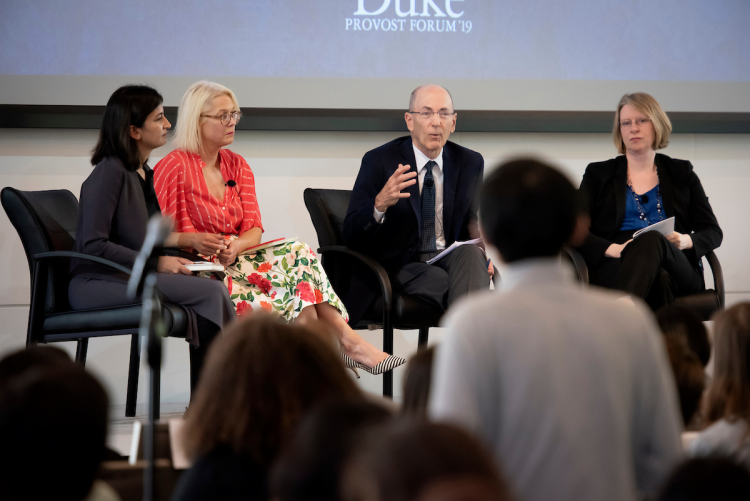 Some of the benefits are economic: Clotfelter told of how many public universities in between 1996 and 2016 sought international students, particularly Chinese, to offset significant budget cuts from state legislatures.

The most important benefits are intellectual, he said, bringing in some of the best students and faculty members from around the world. However, that comparative advantage is not permanent.

“China very much has the aim of having the top universities in the world in their country. They don’t now, but it may not be a long time before they do.”
-- Charles Clotfelter

These and other policies have impacted the composition of who can attend or work for universities. Some foreign students have been turned back from entering the US; others, Jain said, are fearful that “if they leave the country, they won’t be allowed back in.” Jain is also a visiting professor at Duke Law School.

While immigrants are one focus of concern, increasingly Chinese students say they feel like they’ve been caught in a geopolitical moment, said Karin Fischer, a senior reporter at The Chronicle of Higher Education.

She noted that a third of international students in the United States are from China.

This concentration of students has raised political tensions and become a subject of national security discussions. But Fisher said some of the tensions are internal.

“International students are paying a lot of money to come here, and colleges need to come to terms with the challenges they bring,” said Fisher, author of “How International Education’s Golden Age Lost Its Sheen.”

“It’s not clear that many universities have the right set of services that are needed to assist an international student population that looks a lot different than it did decades ago.” 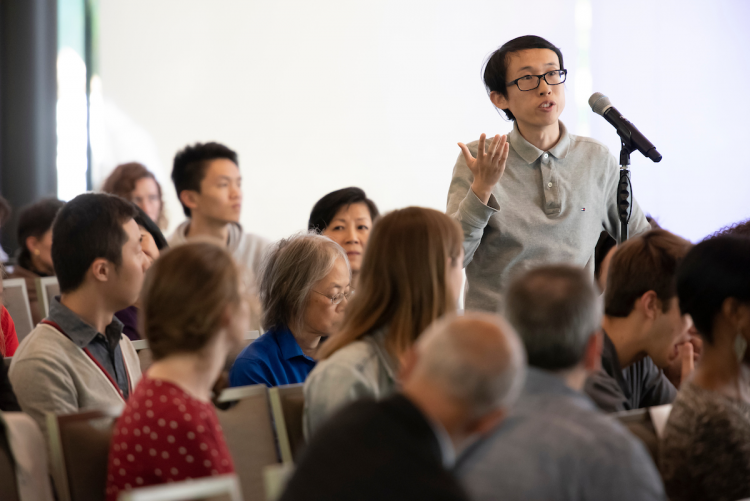 During the Thursday morning discussion, “Options for a Fragile World: Immigrants and Refugees in the US and Europe,” panelists examined the many factors that influence how we think about national identity, migration and the significance of borders.

Michael Hardt, a Duke professor of literature, said if we look at the issue from the standpoint of migrants, “we can recognize that all migrants, regardless of motivation, simply by crossing borders are engaged in a project of freedom, expressing and exercising the freedom of movement as a fundamental right.” Hardt has been instrumental in the project Mediterranea, which rescues migrants trapped at sea.

“The first rule for engaging questions of migration should be to understand migrants not merely as victims in need of charity or protection, but as agents of their own destiny. Humanitarian action, of course, is necessary … but the exclusive focus on victimization and violence slips too easily into a humanitarian logic that divides worthy refugees from illegitimate migrants.”
-- Michael Hardt

Ana Raquel Minian, an associate history professor at Stanford University, said the influx of migrants from Mexico started in the 1940s, when the U.S. encouraged laborers to cross the border.

That U.S. approach began to change in the 1960s, but by then Mexican migrants were firmly entrenched here. The building of borders by the U.S. prompted many Mexicans to stay here rather than risk going home and then not being able to return, said Minian, author of “Undocumented Lives: The Untold Story of Mexican Migration.”

Peter Wehner, vice president and senior fellow at the Ethics and Public Policy Center in Washington, D.C., and a visiting professor at Duke, said it is inherently unfair to say to migrants you are welcome here and then change the rules mid-game.

Wehner said some of the U.S.’s current immigration battles pre-date President Trump, but added, “Donald Trump is a person whose political career is based on attacking the other, and that’s usually the most vulnerable people in society.”

Eric Kaufmann, a professor and assistant dean of politics at the University of London, said it is important to remember that migration solutions need to be both realistic and idealistic.

The rise in the number of migrants has led to an increase in populism both in the U.S. and Europe, with only a small percentage of citizens favoring large-scale migration, Kauffman said.

He suggested a “partial” solution: Rather than offering migrants a permanent settlement, provide a system of temporary facilities with such necessary resources as food, health care and education until things calm down in the migrants’ home countries.

Our top priority, he added, should be to save as many lives as possible.