What he does at Duke: Late in his undergraduate studies at the University of Washington, Matthew Junge thought he was destined for a career as an actuary, using established elements of math to determine the likelihood of real world occurrences.

But after a research project gave him his first taste of the world of “pure math,” which asks bright minds to create innovative approaches for understanding complicated problems not necessarily linked to specific real-world applications, he was hooked.

At the last minute, he swerved off the actuarial track he was on and enrolled in a master’s program, which ultimately led to a doctorate from the University of Washington. Now at Duke, he sparks a similar connection to math for students in the “Math Everywhere” course he teaches for liberal arts majors.

“The premise is that it’s not like the math you did in high school,” Junge said. “It’s about math in the real world. It’s not about algebra or calculations, it’s about using applications of pure math ideas. I think everyone that puts in an honest effort in the course will have an ‘A-ha!’ moment or at least find something interesting.”

The course shows how pure math concepts relate to important real world functions such as encrypting information on the internet and designing fair elections.

When he’s not teaching classes, Junge conducts research that aims to solve the kind of abstract questions that lead to the creation of new mathematic ideas, which can eventually have real world uses.

“A big part of my research is looking at systems of interacting particles,” Junge said. “Just imagine particles floating around in space or moving around at random and if they meet each other, a chemical reaction occurs or they explode, some interaction occurs. My research looks at systems where particles move around like that and asks, in the long run, what happens to these systems? Most people don’t realize it, but new math is being produced at an alarming rate. The amount that we don’t know is overwhelming.”

What he loves about Duke: Junge often works with undergraduate math majors on research projects. He said that part of his job, helping young mathematicians find answers, is a joy.

“I’ve had great experience doing research with some of the more motivated math majors,” Junge said. “I really appreciate having that opportunity. That’s some of the most fun I’ve had here.” 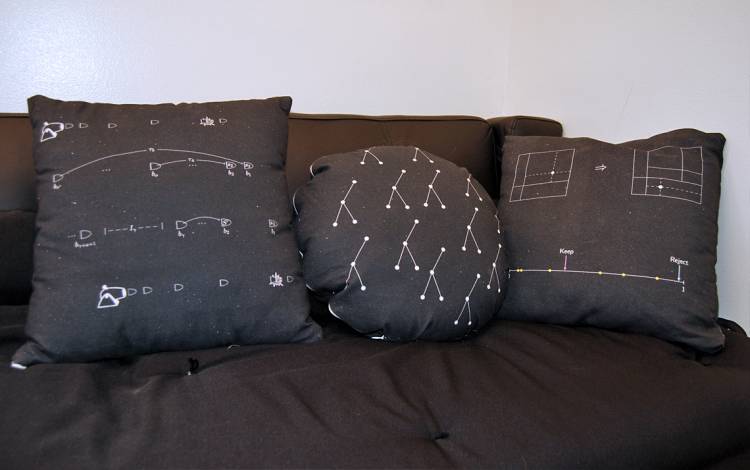 Meaningful objects in his workspace: A key part of Junge’s job is being able to explain complicated math theories in approachable terms. Sitting on the couch in his office are three pillows that help him do just that.

The black pillows, which he had made, feature diagrams and calculations from some math problems he’s chewed over at points in his career. The problems are simple to explain using the images on the pillow, but the math that goes into solving them has kept Junge busy for years.

Among the problems depicted on the pillows are an exploration of randomness using bullets traveling the same path at differing speeds and another depicting one step in a random fragmentation algorithm.

“I’m used to trying to explain my research to people,” Junge said. “Luckily mine is a little more visual than a lot of peoples’.”

Memorable day at work: On the first day of his Math Everywhere class, Junge performs a magic show featuring card tricks. Most of Junge’s tricks – which he admits don’t always go off as planned – have their roots in math and, after trying to wow his students, he shares how he accomplished them.

“I think it gets them excited about the course,” Junge said. “I’m sure they’d like to think that every day is going to be a magic show, but it gets real eventually. But this is really fun.”

First ever job: As a teenager in Gig Harbor, Washington, Junge briefly helped out at Rosedale Gardens, the nursery and garden shop run by his parents. Junge said his job was simple, mainly consisting of watering plants.

In an odd twist for a future mathematician, the part of the job that he liked the least was working the cash register.

“You need a looseness with numbers to do math at a certain level,” Junge said. “It helps to not care too much with minor details, like making change, for instance.”

Best advice ever received: Junge’s parents have always impressed upon him the value of following his passion.

“Do what you love, do something that’s not a job,” wasn’t just their advice to him, it was the logic behind the example they set.

“My dad’s always said that landscaping is not work for him,” Junge said. “On weekends, he’d be at our house just landscaping. He always has ridiculous projects where he’ll create something that looks like a wedding venue out in the middle of the forest. Maybe math is like that for me.”

Something that most people don’t know about him: While in grad school at the University of Washington, Junge – who’s also a musician and competitive Monti storyteller – volunteered with a program that taught math to prisoners in the state’s correctional facilities.

“It was fantastic, it was meaningful work to do and there was a definite need,” said Junge, who helped develop a curriculum for the courses that earned the prisoners college credit. 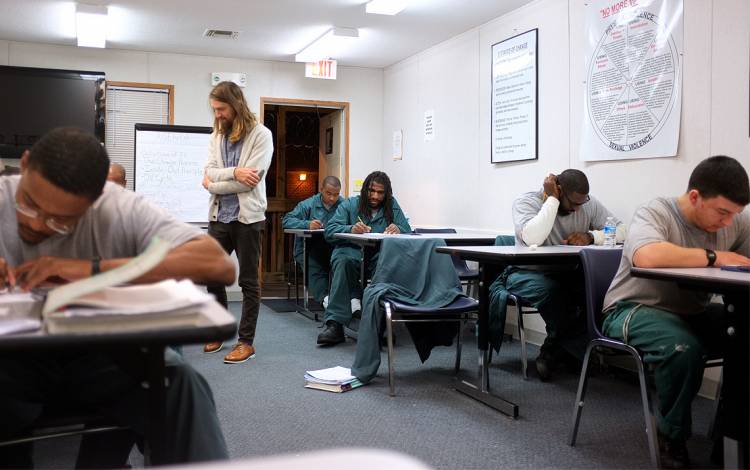 When he arrived at Duke, he continued that work, volunteering to teach math classes at Dan River Prison Work Farm and Warren Correctional Facility a few times a week. Junge said the students were passionate about what they were learning and were able to focus on the work due to their distraction-free environments.

He said the his students, who often came from difficult backgrounds, were living reminders of how someone’s path can be shaped by circumstances they were born into.

“I’ve had a lot advantages,” Junge said. “Going in there, I see the separation between them and me is almost entirely circumstantial. It’s humbling to confront that.”

After a Career of Challenging Racial Myths, Eduardo Bonilla-Silva Isn't Slowing Down