The place of the African-American architect Julian Abele at Duke University is now etched in stone.

The main grounds at the center of West Campus were named “Abele Quad” two years ago, with a ceremony in 2016.  Over the winter break, a permanent stone marker honoring Abele was installed by the crosswalk near the West Campus bus stop. Previously, a temporary brass plaque had been at the location.

The marker includes the famous epitaph in St. Paul’s Cathedral in London for the architect Christopher Wren: “If you seek his monument, look around.”

“This marker is a permanent commemoration of the work of this remarkable architect,” said Tallman Trask III, Duke’s executive vice president.  “With its placement in the center of campus, it will help to educate our community and our visitors about Abele’s enduring impact on Duke University.”

The installation of the marker follows by several months another tribute in stone—a cornerstone on Duke Chapel, engraved to honor the contributions by Abele and Horace Trumbauer.  Trumbauer was the lead architect of the firm that did the original work on Duke’s West Campus, and Abele was Trumbauer’s chief designer on the Duke project.

The cornerstone honor recognizes the important place the two men have in the history of the chapel and university, said Rev. Luke A. Powery, dean of Duke Chapel. 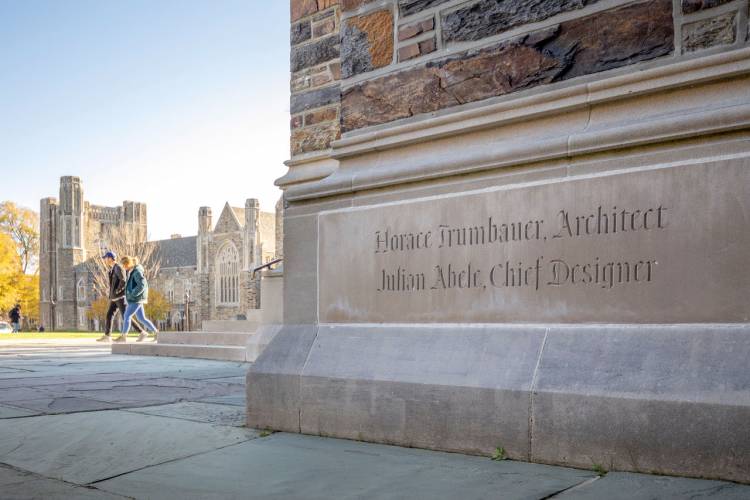 “The architectural creativity of Julian Abele is one of the foundational stones of this university, so having his name, along with Horace Trumbauer’s, on a foundational stone of Duke Chapel is fitting,” Powery said. “It serves as a truthful and just monument.”

Both markers, as well as a bronze plaque inside the chapel, came out of a university study of how the university might best recognize Abele’s historic role at Duke. An 11-member committee chaired by Trask reviewed the history of Abele’s contributions and consulted with members of the Abele family, two of whom are Duke alumni. The Board of Trustees reviewed the committee’s recommendations and decided to name the quad after the architect.

Both items were done by Nicholas Benson, a noted Newport, RI, stone carver. Benson also did the stone sign at the Chapel Drive gate entrance to West Campus.

In addition to the stonework, the university has recently published a biography of Abele, written by former Duke archivist William King, and commissioned a mural by artist Odili Donald Odita for the Nasher Museum of Art.

Trumbauer’s firm was hired to draft the ambitious plans for the new campus as Trinity College transformed into Duke University in the 1920s. Scholars and archivists believe Abele provided the guiding hand and design vision for Duke’s West Campus, including Duke Chapel, as well as for many East Campus buildings, including Baldwin Auditorium. He continued to contribute to the design of the growing campus into the 1940s.

Blue Devil of the Week: Making Wellness a Habit