Contact Patrick Stawski for a photo of the author or a cover image of the winning book.

Duke University named Matt Eisenbrandt’s “Assassination of a Saint: The Plot to Murder Óscar Romero and the Quest to Bring His Killers to Justice” (University of California Press, 2017) the winner of the 2017 Méndez Book Award. 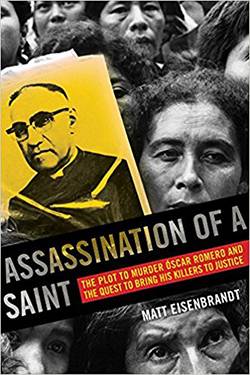 “Assassination of a Saint” traces the thrilling story of how an international team of lawyers, private investigators and human-rights experts fought to bring justice for the slain archbishop. Eisenbrandt, a lawyer who was part of the investigative team, recounts how the team interviewed eyewitnesses and former death squad members while searching for evidence on the squads’ financial backers, with profound implications for El Salvador and the United States.

“Juan Méndez is a luminary in the field of human rights,” Eisenbrandt said. “It is fitting for the award to go to a book about the life and death of Óscar Romero, a man who sacrificed everything in defense of human rights in his beloved El Salvador. While my name is on the cover, “Assassination of a Saint” is the product of dedicated efforts by many people to seek justice for Monseñor Romero.”

Established in 2008, the book award honors the leadership of Juan E. Méndez, who devoted his life to the defense of human rights. The prize honors the best current non-fiction books published in English on human rights, democracy and social justice in contemporary Latin America.

“Unlike previous books on this subject, ‘Assassination of a Saint’ provides an in-depth analysis of the U.S.-based investigation into Romero’s murder,” Caldwell said. “It is also written in an engaging, accessible, and compelling style.”

The award is sponsored by the Duke Human Rights Center @ the Franklin Humanities Institute, Duke’s Human Rights Archive at the Rubenstein Library, and the Duke Center for Latin American and Caribbean Studies.

2016 – Chad Broughton, “Boom, Bust, Exodus: the Rust Belt, the Maquilas, and a Tale of Two Cities”
2015 – Kristen Weld, “Paper Cadavers: The Archives of Dictatorship in Guatemala”
2014 – Oscar Martínez, “The Beast: Riding the Rails and Dodging Narcos on the Migrant Trail”
2013 – Jonathan M. Katz, “The Big Truck That Went By: How the World Came to Save Haiti and Left Behind a Disaster”
2012 – Héctor Abad, “Oblivion: A Memoir”
2011 – Kathryn Sikkink, “The Justice Cascade”
2010 – Victoria Bruce and Karin Hayes, with Jorge Enrique Botero, “Hostage Nation”
2009 – Ambassador Heraldo Muñoz, “The Dictator’s Shadow: Life Under Augusto Pinochet”
2008 – Francisco Goldman, “Who Killed the Bishop? The Art of Political Murder”

Duke Helps Dancer Get Back Her Dancing Shoes