Hult Prize, a global competition, advertises itself as “a benchmark program for social entrepreneurs.” Each year, aspiring social entrepreneurs at Duke get the chance to participate by first competing in Hult Prize @ Duke, which is co-hosted by the Duke Innovation & Entrepreneurship Initiative and the NET Impact Club at The Fuqua School of Business.

Hult Prize hopefuls are given a different challenge each year, and they must create a social enterprise addressing the challenge. This year, teams were tasked with harnessing the power of energy to transform the lives of 10 million people by 2025. There’s a lot at stake: The final prize is $1 million to fund the winning social venture.

At Duke, five teams were chosen from the semi-finals round to advance to the finals round, held on a recent evening at Fuqua. After each team completed a six-minute pitch and a round of questioning from the judges, a winner was announced.

That winner was mPower, a team of four sophomores that aims to fill India’s shortage of agricultural cold storage solutions by offering a novel product and distribution network that compensates farmers and simplifies the supply chain. 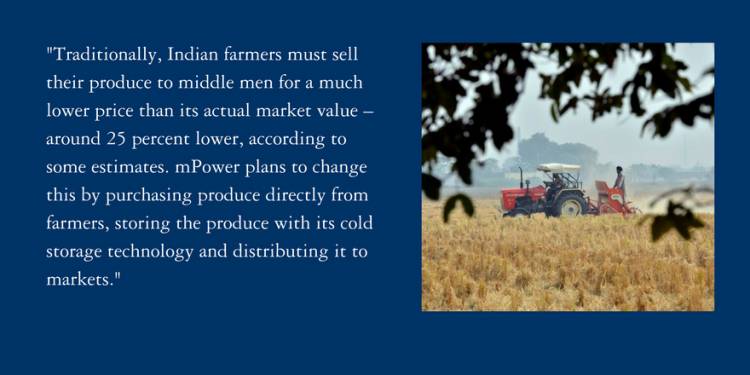 Traditionally, Indian farmers must sell their produce to middle men for a much lower price than its actual market value – around 25 percent lower, according to some estimates. mPower plans to change this by purchasing produce directly from farmers, storing the produce with its cold storage technology and distributing it to markets.

mPower also plans to build its own custom solar-powered refrigeration units to store the produce in between purchase and distribution. Creating a new supply chain will create jobs and empower communities, the team explained during its pitch.

Three of the four members of mPower are Hult Prize veterans – although their team didn’t win Hult Prize @ Duke last year, they applied directly to compete in the regional finals and were accepted.

mPower was especially equipped to answer this year’s challenge on energy because of their involvement in the energy space at Duke. Sanghi and Wang both live in Duke’s Smart Home, and Sanghi is a member of Duke’s Energy Club and is working on energy access through a Bass Connections project.

“Although my background is technical, this year I’ve really gotten interested in the social entrepreneurship side as it relates to energy,” Wang said. “I’ve discovered that working in the energy space is real, meaningful work.”

Sanghi, who is from India, and Chodavadia, who has family living in India, both knew firsthand that India is a place affected by energy poverty and inefficient agricultural processes. They decided to target this population with their Hult Prize project, which meant that the scope of their work could be expanded to focus on agriculture and poverty as well.

mPower’s custom-made fridges will utilize a new type of affordable plastic that can passively cool objects without energy input. Wang said that their company will be one of the early adopters of this technology.

The team has plenty of work to do before the regional finals in March, including prototyping and making sure their product works. Last year, Chodavadia said, they realized that their project must be well past the idea stage to be competitive.

They’re also working on laying the groundwork in India and building partnerships that will help them hit the ground running. The students hope to connect with farmer cooperatives so they can establish the company and build trust within the community.

If anyone within the Duke community – or outside – has experience in working with farmers in India, food supply chains or cold storage, the team would love to connect.

Regardless of the outcome of regional finals, the students are grateful for Hult Prize’s presence in their Duke experience.

“Hult Prize has taught me that it doesn’t take a high level of expertise to have an idea that can make an impact,” Chodavadia said. “You just have to have a good team and be able to develop partnerships to help with implementation. Hult Prize isn’t only an avenue for a project to get funding; it’s also an avenue for a problem to get awareness.”

“Hult Prize is a valuable exercise in thought,” she said. “At Duke, we live in a really big bubble, but this competition enables you to research and understand real world issues. These are skills we can apply to anything we do later in life.”

Pitching at Hult Prize is sure to be a great experience for them all, Wang added.

“It gave us a lot of drive last year to see passionate, motivated teams that were just as committed to solving the problem as we were,” Wang said. “We met people from dozens of countries and now keep in touch with people from all over the world.”

“We were impressed by the strength of all of our teams this year, and there were so many compelling proposed solutions to energy access that our panel of judges had difficulty choosing just one team,” she said. “We’re proud that our winning team has taken what they learned from the Hult Prize competition last year and has returned this year with another great idea.”

Said@Duke: Bryan Stevenson on What is Needed to Achieve Equal Justice