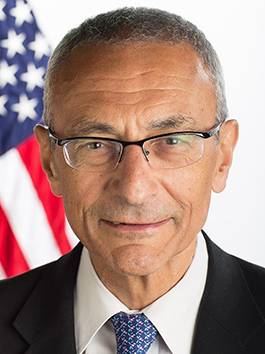 The event in Penn Pavilion on West Campus is free and open to the public, but tickets are required. They can be picked up in Rubenstein Hall 134 or reserved via will call here.

Parking is available in the Bryan Center garage and surface lot.

Podesta’s talk, “America’s Role One Year After the Election That Shook the World,” will draw upon his experiences running against the Trump campaign, as well as lessons learned during his roles in the past administrations. Podesta, the founder and director of the Center for American Progress, will also explore America’s role – militarily, economically, politically -- in the current world order.

“John Podesta has been at the center of American politics and policy for the past 25 years and has always been well-known to political insiders,” Feaver said. “In 2016 he became well-known to the majority of Americans because of his role in Secretary Clinton’s campaign, which led him to be targeted by hackers who stole his personal emails and used them in an effort to shape the presidential election.

“This is an extraordinary opportunity to hear his views on the challenges the country faces today, and how we got to this point."

The event is sponsored by the Program in American Grand Strategy, POLIS, the Sanford School of Public Policy and the Political Science Department.