On an unseasonably warm October Friday morning, a bus headed out of East Campus to take some 40 faculty and staff members into Durham in an effort to try to shake up their ideas about the city they work in.

“There’s no way that in the next six hours we can cover the entire complex history of Durham,” said David Malone, professor of education and director of the Duke Service-Learning Program, which sponsored the tour. “But we can show you enough to problematize” the idea of simple understandings of the Duke and Durham relationship.

“The questions we have to ask is what tools do we have to talk to people in these communities on an equal basis and make them feel like they are part of a conversation and that we value their voices as important?”

The goal comes out of the Duke Service-Learning’s efforts to find more valuable ways to integrate academic programming into the local community. Duke has a long history of community engagement, Malone said, but too often Duke students have benefited more than the community members they work with.

He said the tour is one way to involve others in that effort to re-examine the university’s approach and to encourage faculty to participate in service-learning, community engaged research, and to get involved personally in the community.

“What we’re seeking here is reciprocity,” Malone said. “We want a relationship with the community that is more equal. The best way for [members of the Duke community] to see (the) Durham’s history and the history of Duke-Durham relations is to get off the campus and into the community. We’re going to take them into neighborhoods they haven’t seen before.”

Some of the Duke faculty and staff on the bus are new to Duke. Vice Provost Abbas Benmamoun said he was looking forward to seeing more of the city he now called home.  But others were longtime Duke employees and Durham residents who were hoping to go beyond the basic history of the community that they knew. 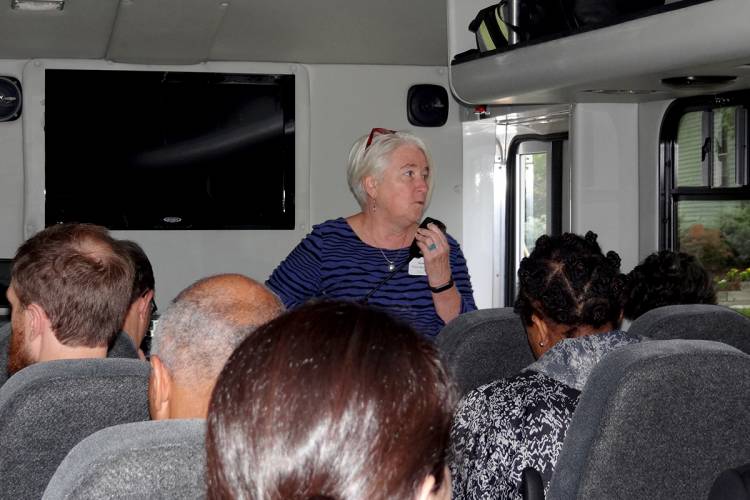 The tour was led by Barbara Lau, director of the Pauli Murray Project, and two members of the Office of Durham and Regional Affairs: Sam Miglarese and Mayme Webb-Bledsoe.

Some of the sights were familiar: The former tobacco district turned into a thriving downtown district filled with office and residential space. Webb-Bledsoe explained how Duke’s approach of not buying space in Durham’s buildings but leasing it was intentionally done to keep the land on local tax rolls, providing needed tax revenue.

A stop at North Carolina Central University and its art museum led to a discussion of the growing collaborations between Duke and the state’s first historically black institution of higher education. Launched in 1910, NC Central was brought to life by remarkable educator James Shepard and supported by some of the same African-American entrepreneurs whose energy led Durham’s Parrish Street to be known as the “Black Wall Street.”

Webb-Bledsoe told the story of how the Durham Freeway ripped apart thriving African-American neighborhoods in the 1960s, dispersing residents elsewhere and robbing the communities of a hard-earned economic vitality. Some have not recovered five decades later.

Issues such as degraded neighborhoods have been a challenge for the university to approach, said Webb-Bledsoe. Duke can point to several successful efforts to strengthen neighborhoods through promotion of homeownership by Duke employees.  But some efforts have failed despite the best of intentions.

Like Malone and the Service-Learning program, Webb-Bledsoe said the university is seeking ways to cultivate more reciprocal relationships when it engages communities and neighborhoods.

“The questions we have to ask is what tools do we have to talk to people in these communities on an equal basis and make them feel like they are part of a conversation and that we value their voices as important?” she said.

Throughout the day, the bus passed through key points of Durham’s history and contemporary community organization. Stops included the renovated Whitted School, once a historic school in the predominantly African-American Southside neighborhood now turned into a center combining both assisted living for seniors and a pre-K school for local children. Other visits went through South End, Durham Central Park and the Lakewood and Walltown neighborhoods.

After noon, the Duke contingent had lunch on Parrish Street, where they broke into different tables and met representatives from community organizations who discussed the work they do in Durham and how Duke can best assist that effort.