Professor Nan Jokerst had a difficult task hanging over her during the past few months deciding what would make the ideal gift to present to outgoing Duke President Richard H. Brodhead at his last Academic Council meeting.

Jokerst, the council chair, looked into first editions of some of Brodhead’s favorite books. But the best idea came when she heard what the president was most looking forward to doing over the coming year -- spending time with his 2-year-old granddaughter.

At Thursday’s meeting, the last of the academic year, Jokerst and the other six council chairs who served during Brodhead’s presidency came bearing gifts: Favorite children’s books that Brodhead and his wife Cindy can read with their granddaughter.

The seven current and former chairs represent a variety of disciplines and each book selected had some, at least tangential, connection to their field.

Here’s what they selected:

Nancy Allen (Medicine): “Make Way for Ducklings,” a 1941 book written and illustrated by Robert McCloskey. A favorite book of Allen’s two children when they were young, the story takes place in Boston and became so popular there is a statue in Boston Public Garden of the ducklings from the story.

Paul Haagen (Law): “Alice’s Adventures in Wonderland,” by Lewis Carroll. One of Haagen’s favorites, he said that he once walked in the same park that Charles Dodgson (the author’s real name) walked in telling stories to young Alice Liddell. The law professor added there is a famous trial in the story.

Paula McClain (Political Science): “Brown Bear, Brown Bear, What Do You See?” The popular 1967 book, written and illustrated by Bill Martin Jr. and Eric Carle, helps children learn colors and concludes with a subtle message about the importance of teaching.

Craig Henriquez (Biomedical Engineering): “Jessica’s X-Ray” by Pat Zonta. Henriquez took the curriculum message to heart and found a book that shows the value of biomedical engineering to children’s health care. He said he also considered “If You Give a Mouse a Cookie” because, he said, “it embodied how faculty and university administration work well together.”

Susan Lozier (Earth and Ocean Sciences): “Frederick” by Leo Lionni. It’s about a mouse who loves to read and write, even though other mice make fun of him for these interests.

Josh Socolar (Physics): “Freight Train” by Donald Crews. Socolar noted that this book had everything Duke looks to offer in an education – quantitative studies, social sciences, arts, environment (“although the train does run on coal”) and multiple modes of inquiry. It also calls up local history since the title references the popular folk song penned by Carrboro native Elizabeth Nevills Cotton.

Nan Jokerst (Electrical and Computer Engineering): “The Complete Book of Flower Fairies.” This 1920 classic by Cicely Mary Barker remains in print. Jokerst said she knew Cindy likes to work in the gardens. “With this book, you can yield to magic. … I hope you, Cindy and your granddaughter can use it and go look for the fairies in your garden.”

Lozier had one other gift for Brodhead: She said when she first became council chair six years ago she introduced Brodhead by reading a Whitman poem. At that time, Brodhead said he hoped he could repay the favor someday by reading a poem about fluid dynamics.

It was time to repay the favor, Lozier said at the meeting yesterday. She had the president come to the stage and read a “short ditty” about little whirls and big whirls and ended with a thought about viscosity. 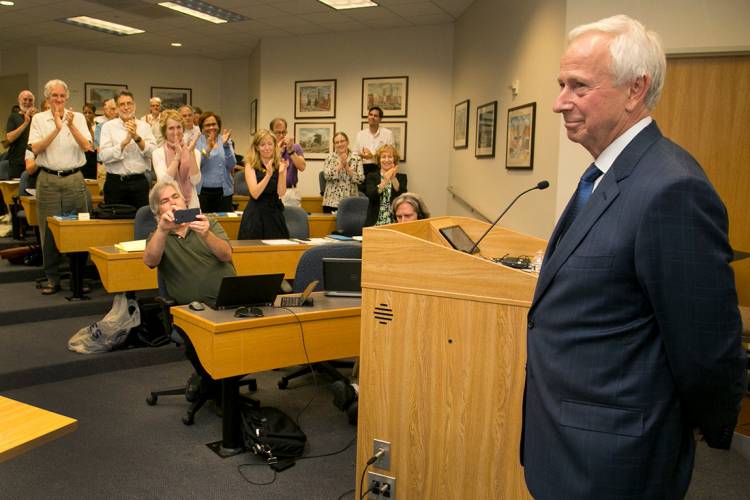 Brodhead preceded the ceremony with a short speech thanking the past chairs and the faculty for their governance work. The successful collaboration between faculty and administration on challenging issues at a time of expansion and change both on campus and internationally meant that he leaves office “with Duke in very good shape.”

Brodhead offered two notes of caution: One was the university had to work harder to improve access and affordability to all talented students. “One of the deeper missions of the university is to be an engine of social advancement,” he said, and to allow students to achieve their full potential regardless of background.

But he acknowledged the pathway to college remains “profoundly unequal. Working against this requires strong institutional commitment and investment.”

The second concern is the need to “blend caution with our will to innovate.” He said Duke’s innovations works best when faculty-administration collaboration adds a layer of careful consideration to a willingness to experiment.

He singled out the multi-year discussion about Duke Kunshan University as a leading example of “faculty governance working at the highest level.”

“The reason why many of our peers are not doing Duke Kunshan is because their cultures of deliberation do not allow departures from an inertial world. You did. You weighed the pros and cons, and only after you were satisfied were you willing to take a calculated gamble,” Brodhead said. “I hope you preserve this as part of our culture.”

How to Beat the Winter Doldrums

Maintain your well-being and energy with these healthy habits