The following address was delivered by President Richard H. Brodhead at the 2017 Baccalaureate ceremonies in Duke Chapel.

You and I have something in common, Class of 2017. Have you heard? I too am graduating from Duke this spring. Do you wonder why? The more I reflected, the more I realized I could not even think of carrying on here without you. So I decided: If you are leaving, I am too. This fact gives me uncanny empathy with your current transition. Earlier this year, a student worker in my office said: “So President Brodhead, is this like your senior spring?” I admit: I have been feeling a lightening of the load, even if not yet sporting flip-flops and shorts. But with the rejoicing, these end-time feelings are actually more mixed. Another student in my office, one who enjoys using the whole of his vocabulary, said that he was feeling “beset with contrary emotions.” A third said that as his remaining Duke days grew shorter, he wanted to grab each one and hold it tight, but that the harder he tried to slow time’s passage, the faster it flew.

As I have mused on what to say to you, I remembered that transitions are hard tests of a strength we need to advance, the strength now called resilience. The core meaning of the word is easy. The verb “to jump” is buried in its etymology, and resilience means rebounding, bouncing back.

One use of the term significantly deepened my sense of what’s at stake.

General Martin Dempsey, a Duke alumnus who recently served as the Chair of the Joint Chiefs of Staff, the highest military adviser to the President, is teaching at Duke and came to speak to the Board of Trustees. In his talk, he listed causes for hope and worry in the current geopolitical scene. High on his worry list was fear of lack of resilience in face of a terrorist attack.

I wanted to make sure I had heard him right, so I asked the General: You didn’t say your fear was fear OF a terrorist attack; you said you feared lack of resilience from an attack—have I got it right? He replied that I was correct. “The threat of terrorism,” he wrote, “can neither change the way we live nor the way we interact with the rest of the world unless we allow it to do so.” You understand what he means. Terrorism aims not just to inflict finite physical destruction but to create a limitless feeling of insecurity and vulnerability, a sense of exposure so vast that you cease to act as you ordinarily would and begin hysterically reacting to largely imaginary threats. To resist this effect, it’s critical to rebound—to confidently reassert what we are proud to be.

I learned this concept in another setting from our football coach David Cutcliffe, who once said, “I tell my players to think of the turf as a red-hot griddle. When you’re thrown down, you have to hop up as fast as if staying down means getting burned.” I did not play a varsity sport in my youth, but when I heard these words, the lesson was profound. (Surely you did not think all worthwhile learning at Duke took place in courses?) Sports aren’t about continual triumph. They’re a contest where sometimes things go your way, and sometimes they go against you. When they do go against you, the art is to get back up, to process what just happened as quickly as you can, then to return yourself to the present moment, not dwelling on past defeat but putting yourself forward again as fresh and strong as you know how. 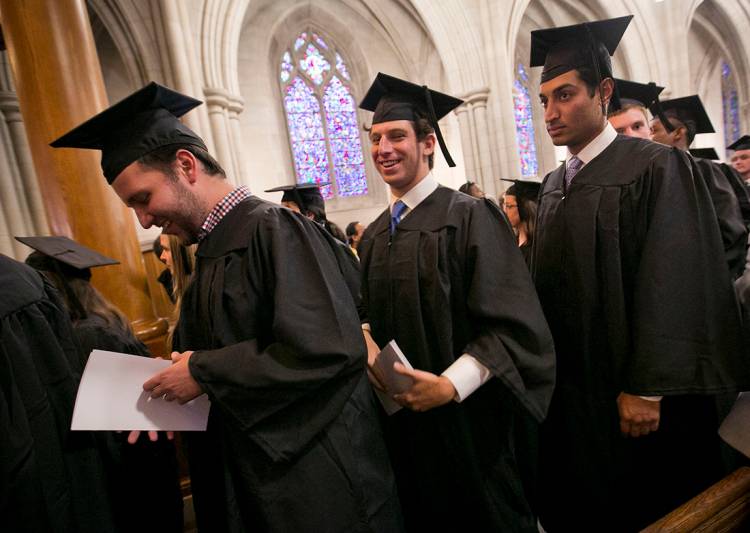 So resilience means rebounding from something that would throw you down or lay you low. But why am I speaking to you of resilience? Aren’t you the world-beating Class of 2017, about to ride off from success at Duke to extended success in later life? You are—but you will lead a very unusual life if you never encounter failure, loss, frustration, even defeat. There’s no living without being battered by adversity in its thousand forms. Most humans throughout history have understood this perfectly well. But there is one tiny exception, and you inhabit it: our contemporary culture of success, which has normalized the expectation that you could and should make your whole life an unbroken string of triumphs.

This expectation may drive high achievement, but at heart it is delusional, a fantastic denial of obvious truths. Sunday morning I will be introducing candidates for honorary degrees. They were all once just like you, bright young men and women about to be launched into the great unknown. In their later lives they have all defined peak performance in their chosen fields.

As I recite their inspiring accomplishments, you will likely think: Well, they had it easy. They never knew any uncertainty or humiliating setbacks. But you would be wrong. George Church, one of the world’s foremost authorities on personal genomics, flunked out of the Biochemistry graduate program at Duke. A super-smart Duke undergraduate, he had taken upper-level graduate courses in the sciences as early as his freshman year. When he enrolled in a Duke graduate program, he was required to take those same courses again as degree prerequisites, but found the repetition so deadly that he skipped classes and eventually received the grade of F. The graduate school then kicked him out, with some bureaucrat—presumably now burning in an eternity of shame—trying to soften the blow by adding: “We hope that whatever problems of circumstances contributed to your lack of success . . . at Duke will not keep you from successful pursuit of a productive career.” He needn’t have worried. Church continued his studies at Harvard, where he is now Professor of Genetics and founding director of the Wyss Institute for Biologically Inspired Engineering.

Sunday I will also introduce you to Loretta Lynch, a Durham native who became a tough, widely admired U.S. Attorney for the Eastern District of New York before being named Attorney General of the United States in 2015. Growing up black in a region not far removed from segregation days, when Loretta Lynch got a top score on a standardized test in elementary school, officials could not believe such a result was possible for a black student. They required her to take the test again—and as her proud father still boasts, she did even better the second time.

Clay Christensen is a Harvard Business School professor who authored the theory of disruptive innovation. His book The Innovator’s Dilemma has been called one of the six most influential business books ever written. Surely his career must have been a straight line of upward ascent? In fact, Christensen suffered first a heart attack, then a cancer diagnosis, then in 2010 a massive stroke that impaired his ability to speak. With heroic willpower including as much as eight hours a day of speech therapy, he recovered his power to the extent that, in 2012, he gave a brilliant talk to Duke trustees, beginning by explaining that he would need to stare at the floor for the entire speech because making eye contact would disrupt his ability to find his words.

Now, any of these setbacks could have been so discouraging as to be virtually career ending. If these men and women went on to achieve at the level we celebrate, it was not because they were spared adversity, but because, in face of profound setbacks, they were damned if they were going to be halted, they bounded back, and went on to write the story they felt called to write instead of being locked in a narrative of defeat. During your freshman orientation, your class was the last at Duke to hear the words of Maya Angelou, who found a memorable phrase for this spirit of indomitability: “But still I rise.” After the greatest tragedy in his personal life, the death of his young son from typhoid fever, Ralph Waldo Emerson wrote this line in his journal: “I am defeated every day, but for victory was I born.”

Now, I have heard it said that it’s wrong to celebrate resilience as an all-sufficient virtue. Critics note that when resilience is the prescription, individuals are being asked to find the whole solution in personal willpower, deflecting attention from social or structural barriers that create many personal limitations. I get that. It is not a trivial point. But how do we expect such structural restrictions to be overcome except through the strength and resilience of those who fight them? A never forgotten fact of my actual senior spring was the assassination of Martin Luther King. Rolling back the rule of legally enforced racial segregation in America, the accomplishment of King and his Civil Rights colleagues, was not for the weak of spirit or those easily cast down. It took persistent, endlessly renewed self-assertion against seemingly immovable obstacles and terrifying personal threats, from the bomb set off at King’s house with his wife and baby inside when he was leading the 1956 Montgomery bus boycott to the death threat he spoke of in what proved to be his final speech.

I hope there is some difference you want to make. I hope that’s the success you aspire to. And differences have been made in the world, differences of many kinds, made by men and women not fundamentally different in strength from you. But differences aren’t made by complaining that they are needed. They’re made with work, through struggle against obstacles, by people who are defeated every day perhaps but who rebound, who say with some never-extinguished inner voice: still I rise.

Class of 2017, I hope you will leave Duke with happy memories. But your life here was not a solid run of bliss. This was a place of self-discovery in the crucible of challenge. If Duke has had a formative or transformative effect on you, it will have been through this mix of struggle and success. Now it’s time to take the self you became here out into the world of adult responsibilities, where you will face new successes and new challenges, continuing to grow through their joint tutelage. You’ll do fine if you absorb what life throws at you and find the resilience to advance toward what you feel called to do. Have you got that? If so, there’s no need to be beset by contrary emotions. Good things lie behind and better ones ahead. Let’s get out of here.